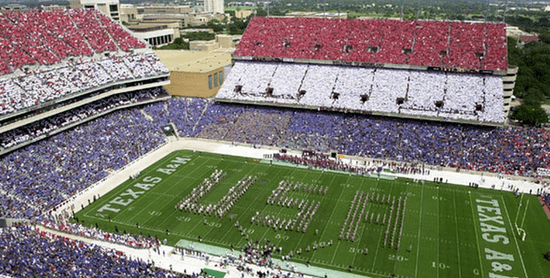 Oklahoma State’s first game back after the 9/11 attacks in 2001 was in College Station.

A&M students being what A&M students are, an organized red, white, and blue out of all three decks took place.

It was absolutely tremendous.

The first #okstate game after 9/11 was at Texas A&M. And it was awesome. pic.twitter.com/gARBfiKURA

“The entire stadium was red, white, and blue and very patriotic. There was a lot of energy and enthusiasm and I’m sure our team drew from that.”

It feels like it’s been forever since that day — I saw something on Twitter the other day that college freshmen in 2014 were in kindergarten (!!) on September 11, 2001 which is just completely absurd.

I was in pre-cal at my high school — likely playing snake on my TI-83 and thinking about baseball practice or the cute girl at the front of the class I wanted to take to Homecoming.

We left early — our baseball coach put a note on the locker room that read something like “no…are you really checking?” regarding practice that day. My dad worked in downtown Houston at the time so he was home when I got home because I think most major cities were evacuated.

I don’t remember a ton other than watching news channels I never watched incredulously for the next 48 hours.

My favorite memory from the entire series of events came during the World Series that season — something I’ve posted several times on this blog. The best part? Jeter told President Bush as he was going out “don’t bounce it, they’ll boo you.”

Boss throw, by the way.

13 years is a long time but I don’t think 130 years will be long enough to forget the angst and devastation. The Sports Illustrated[1. Still a bastion of elite journalism at this point, by the way.] cover that week was chilling: Sports are sports — entertaining escapes for real life. We love to create tirades over who should be QB1 in Stillwater and whether or not Baylor is really really really for real this time.

Sports are fun, sports are sometimes tiresome, and ultimately sports are not that meaningful outside of the metaphorical lessons they teach.

When I look at that photo from College Station I’m reminded that the greatest part about all of this isn’t getting to watch Daxx throw darts at BPW or Le’Bryan spin around post defenders in GIA, but rather that we all get to enjoy it together.

That photo is chilling because 80,000+ people came together and said “we’re in this together, this unites us.”

So hopefully it doesn’t take another tragic event to create goodwill among us — neighbor and friend.

Get off your phones, stop reading Twitter, that poll on Daxx and JW can wait until later for your vote — go enjoy the fact that our liberty was (and is being) paid for.

Go enjoy the fact that you are free to congregate with thousands of your best friends every Saturday to watch a sporting event and don’t take it lightly.