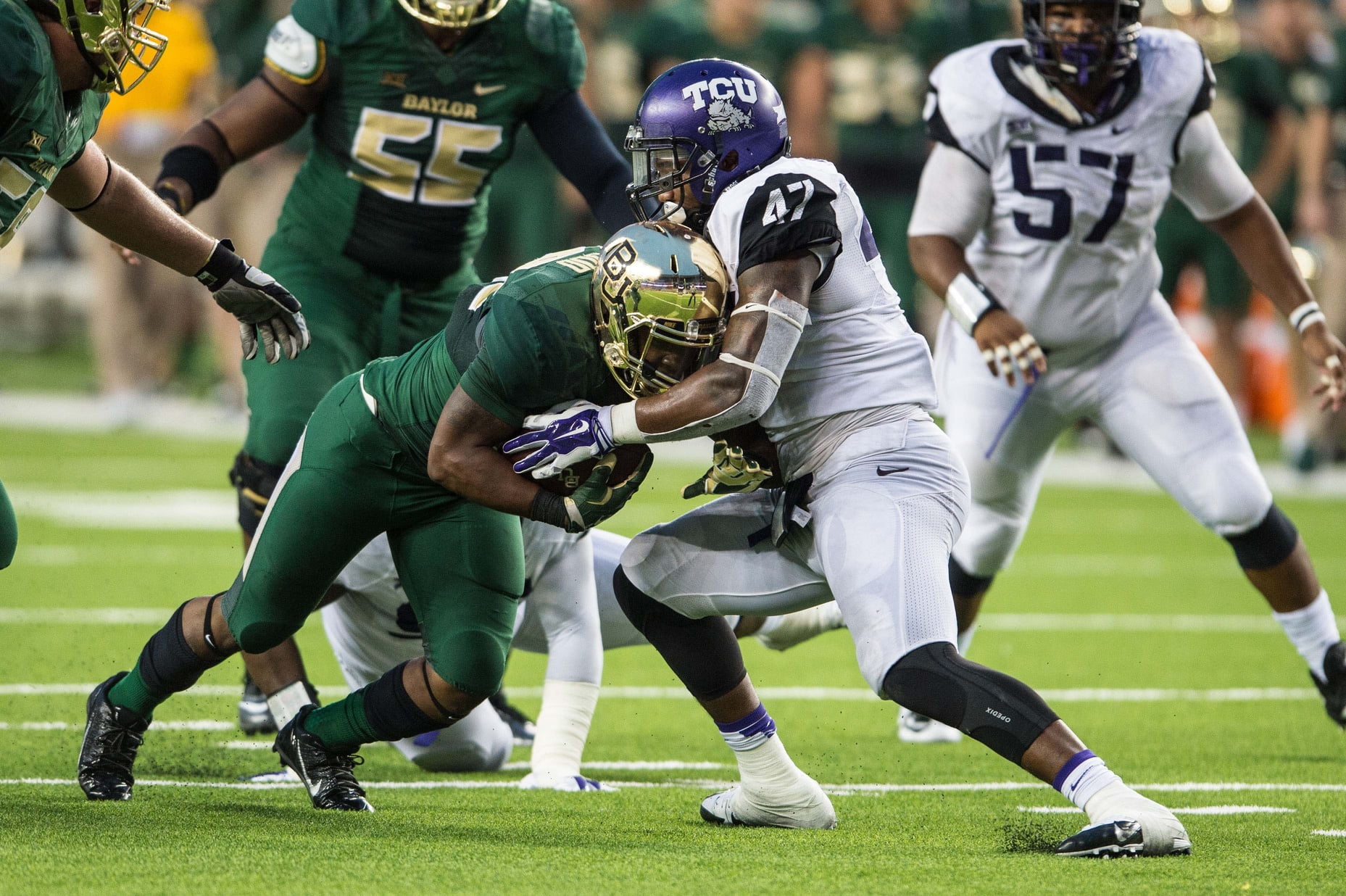 I have a confession.

I’m willing to consider that the reason for this is because my team isn’t in the conversation (or on the same planet as the conversation is taking place) but I think it’s also because it’s being discussed ad nauseam pretty much everywhere I consume sports.

And it’s being discussed stupidly.

The problem I have is not with the playoff itself but with the decision that somebody (probably a marketer) made to release what amounts to a poll every single week.

It makes the entire conversation tiresome and nothing more than a plunge to the bottom of the intelligence barrel when it comes to objectivity and reason.

Let’s discuss for just a minute.

I read this post on Phog Blog the other day regarding Baylor-TCU and I thought it was fairly smart but I wanted to add to it a little bit. Let’s talk about this rationally and think about how we should actually think about this.

First, we must determine what the CFP committee’s goal is because usually any opaqueness can be alleviated by simply stating your original, unabated goal.

According to its website the CFP committee’s goal is to do the following:

The committee’s task will be to select the best teams, rank the teams for inclusion in the playoff and selected other bowl games and, then assign the teams to sites.

It goes on to state that it will use a number of criteria and “will have flexibility to examine whatever data they believe is relevant to inform their decisions” which means the DGAFs will be flying.

Let’s get back to the Baylor-TCU argument, though. I’ve thought about this a lot and this is the best analogy I can come up with.[1. Not sure what those two things say about me as a think but yeah..]

Ben and Taylor are two 22-year-old out-of-college kids who both get jobs at a large multinational conglomerate. Ben starts in marketing, Taylor in sales.

As they get older they both rise the ranks of the corporate world having myriad successes and failures — basically living out the American dream.

When they are both 27 years old their careers cross paths. They (and a few other folks) both apply internally for a pretty high-level management position, at least for a 27-year-old.

After a long interview process and multiple meetings it is determined that either Ben or Taylor will get the job. They go through another week of testing and interviewing before a decision is made.

Finally it is determined that Ben will get the gig even though it looked like Taylor might get it for the majority of the month-long process.

It’s a small victory for Ben (he and Taylor don’t know each other) but they both know the decision to hire Ben over Taylor was razor thin, though legitimate. They both agree to this point.

Taylor goes back to his position in sales and Ben continues on in management. Over the years Taylor begins to rise and gets his own job in management. Both have continued success.

When they are both 35 Ben, after spending eight years in management, applies for a job one step below being a vice president. After another month of rigorous interviewing it is determined that he loses the spot to a 24-year-old fresh-out-of-college kid named Willy Vic that nobody at the company really likes.

This paralyzes Ben. He’s bummed. It’s a massive blow to somebody who had only tasted success over the last 13 years. Eventually he recovers but his reputation to upper management and those who know the specifics is forever marred.

The worst part is that he knows he was beat straight up by Willy Vic. His boss lists the reasons for it and he agrees with all of them.

Ten years later Ben and Taylor are both 45 years old. Taylor has risen to the same level as Ben over the years and they’re both applying for one of eight VP spots at this multinational conglomerate. They’re the only two applying.[1. Willy Vic later got into drugs and ended up quitting to work for Red Bull.]

Now I think you see the dilemma upper management has in trying to hire a VP here. It’s true that Taylor once lost a job to Ben (barely) but it’s also true that, more recently, Ben lost a big-time position to a 24-year-old who had to quit later on because he got into drugs.

Why did Ben lost out on that job? What is it about him that made him lose it to Willy Vic? Does that mean he’s not the right man for the job and that Taylor might be even though Taylor once lost out to him for a previous job? There are a lot of questions to be answered.

In fact I think I’ve finally landed on the side of TCU being included in the playoff if both win this weekend because I think it’s the more correct way to think about all of this.

Though I concede that both teams have an incredibly legitimate case.

Yes it matters that Baylor beat TCU at the beginning of the season but because the committee’s stated goal is to pick the four best teams for the entire year then it doesn’t necessarily mean as much as you might think (i.e. zero people think West Virginia is a better team than Baylor).

This is actually sort of the point. Any Baylor fans who say “because we beat TCU we should be in” must also think “because West Virginia beat us then they should be in.”

But if Baylor Fan thinks “because we beat TCU and our teams have the same record” then you’ve automatically entered into the resume argument and I’m not sure that’s an argument Baylor wants to get into.[1. Though I think I could be talked to the other side pretty easily with a strongly-thought out argument.]

I just wish the whole thing was being thought about smartly (wasn’t that why we got rid of the BCS?) but that’s probably too much to ask for about sports in 2014.

A few other CFP notes:

• How many teams would the committee have to include before OSU was on the bubble? More or less than 64?

• Baylor is going to have an Ohio State problem if they aren’t ranked ahead of them tonight.

This week's important for Baylor. Probably has to pass one team a week in CFP poll. If it doesn't pass OSU now, why would it next week?

• After having played both I think TCU would probably win six of 10 games played between the two on a neutral field.

• There is a zero percent chance the playoff isn’t moved to eight teams in the next five years. Zero.

• Is there anyone who thinks FSU would beat Baylor or TCU right now?

• The whole “pick four teams from a 125-team pool” is quite absurd given how uneven the landscape is.

That is, how do you determine if Ohio State (which plays a 13-game schedule and totally different teams) is better than TCU or Baylor (which play 12-game schedules)? It’s impossible.

• The last point is why we need eight (or whatever) conferences and just toss all the conference champs into an eight team playoff and take the committee out of it. It’s the only way.

Get them (and everybody else not in a power five conference) out of here.

• It crushes me on the inside a little to think that Baylor is about to win back-to-back Big 12 titles and OSU handed them the 2013 one, not to mention a Heisman trophy in 2011. You’re welcome, Baylor.