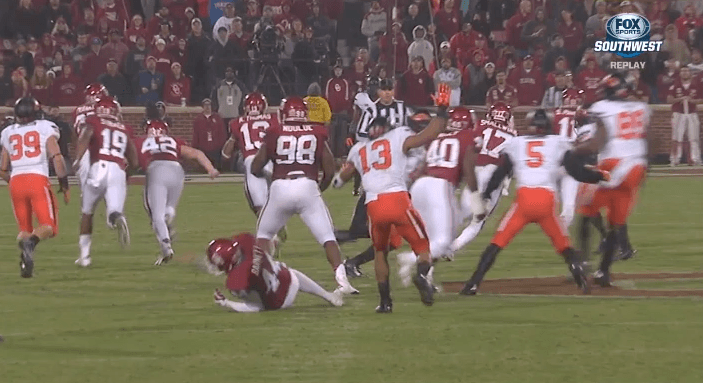 For those of you unfamiliar with the No Huddle version of Big 12 games on Fox Sports Southwest, it’s one of my favorite things about Fox having Big 12 rights.

It’s essentially the personal pizza for somebody who’s hungry for pizza but doesn’t want to spend $11.99 on the whole thing.

They boil 200-minute games into one hour, showing only the actual plays on the field and nothing else.

It’s the way my wife would prefer to watch live sports.

Anyway, the No Huddle version of Bedlam 2014 was on Fox Sports Southwest on Wednesday and I watched it during my lunch-hour workout.

I thought I’d post the 4th quarter and overtime for you (see above — sorry there’s no sound, if you want sound here’s the whole thing) and jot down a few final thoughts I had before we move on.[1. Who am I kidding? We’re never moving on from this. I never want to move on.]

• This hit was just insane. I don’t know how Glidden recovered.

• Honestly, I thought the drive after OSU brought it to within 28-21 was the perfect historical way to end Bedlam 2014. OSU has hope, OU snuffs it out with a long drive to make it 35-21 even though it hadn’t done anything offensively at all in the second half.

• On the third down after Ross didn’t get in with 8:12 left OU scored from the 1-yard line. Think about this: if OSU stops OU there and OU kicks a FG then the score is 31-21 and there are probably 20 fewer seconds on the clock which means the Tyreek punt return is essentially a walk-off win in regulation.

• The timeout thing — Gundy used them early but it turns out that it wouldn’t have mattered either way because if he didn’t use them early he would have used them on the OU drive right before the punt return.

• Also, the three-and-out OU tossed up with a two-score lead right after OSU gave it back to them was bigger than the one right before the Tyreek punt return.

Stoops would presumably allow Cody Thomas to throw with a two-score lead whereas he wouldn’t with a one-score lead so you have more variables when trying to stop OU down 35-21 than when it was 35-28.

• People will point to the touchdown throw but this one was big balls Rudolph. I know Sheperd was sitting in that zone pocket but man.

• The sack Rudolph took on the first play of the last drive in regulation right before he threw an interception was a really good sack. Am I the only one who feels like he turns 10-yard losses into three-yard losses whereas Daxx did the opposite? 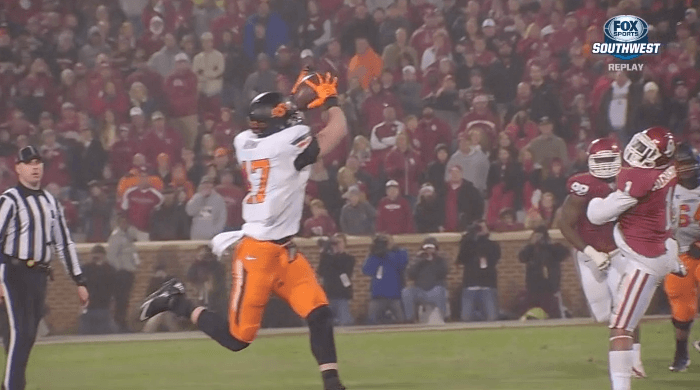 I have a lot of jokes here that would get me fired from my gig at CBS. 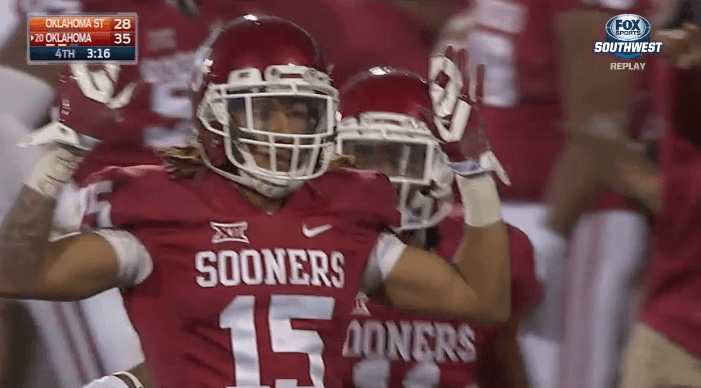 • Stoops ran the series before the punt return like Whitney Hand was playing quarterback. OU started at the OSU 45 and needed about 12 yards to reasonably put the game on ice. Instead, it went backwards.

• I wrote enough about the punt return here to last a lifetime but I have to say it keeps getting better. I’ve probably seen it 15+ times now and it’s more and more exciting every time.

I got so giddy watching it on Wednesday that I cranked the treadmill up to 26 MPH and tried to run with the Freek during my workout.[1. Not really, I’d be dead.]

I didn’t want to spray hyperbole all over the Internet on Saturday night with my orange firehose but I think it’s my favorite OSU play ever.

I love punt/kick returns more than most to begin with and everything about it is so perfect.

It has a monster block, a couple of jukes, the speediest dude in the country and two insane calls — THIS. IS. BEDLAM. and THERE. GOES. THE CHEETAH.

• Somebody pointed this out to me after the game but the hike on the extra point almost bounced off the turf. How fitting would that have been? 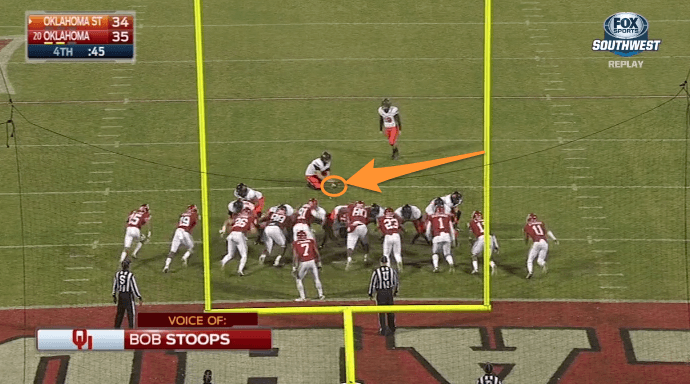 • Actually I realized after the game that the most fitting way for this to end would have been for us to kick to Alex Ross and him to run it back 103 yards as time expired for the W which, um, he sort of almost did. 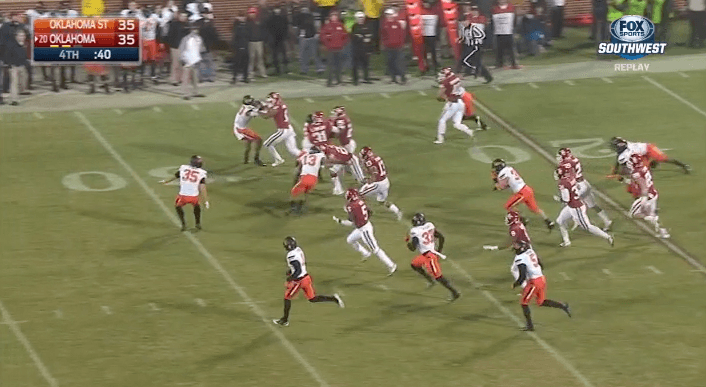 • That’s the “we should have recruited Tyreek harder” face. 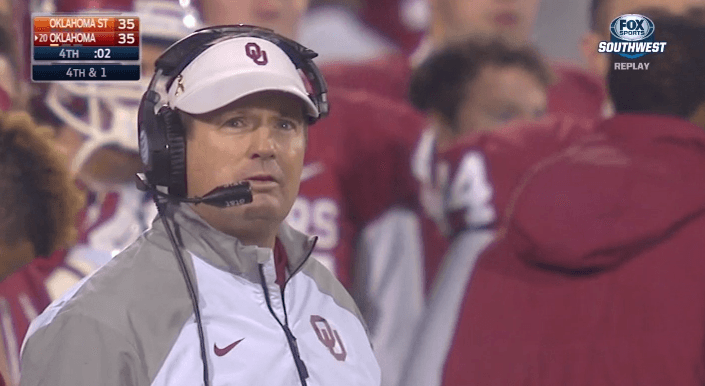 • It got lost a little bit but the play Seth Jacobs made on Blake Bell (of course) in overtime might have saved the game.

• I forgot OU got a holding penalty on third down in overtime. I bet it was tempting to turn 3rd and 12 into 3rd and 22 and push OU completely out of field goal range but Gundy turned it down which was probably the right call regardless.

• How badly did everyond want Roland to get a TD in OT?

• The sound is off in the video at the top but that clip you see of Gundy at 17:45 is him talking about how Grogan wanted the ball in the middle of the field because it’s like how when a golfer trusts his 9-iron you want him to use it because if he uses his sand wedge he’s going to be thinking about chili dipping it.

I have no idea either.