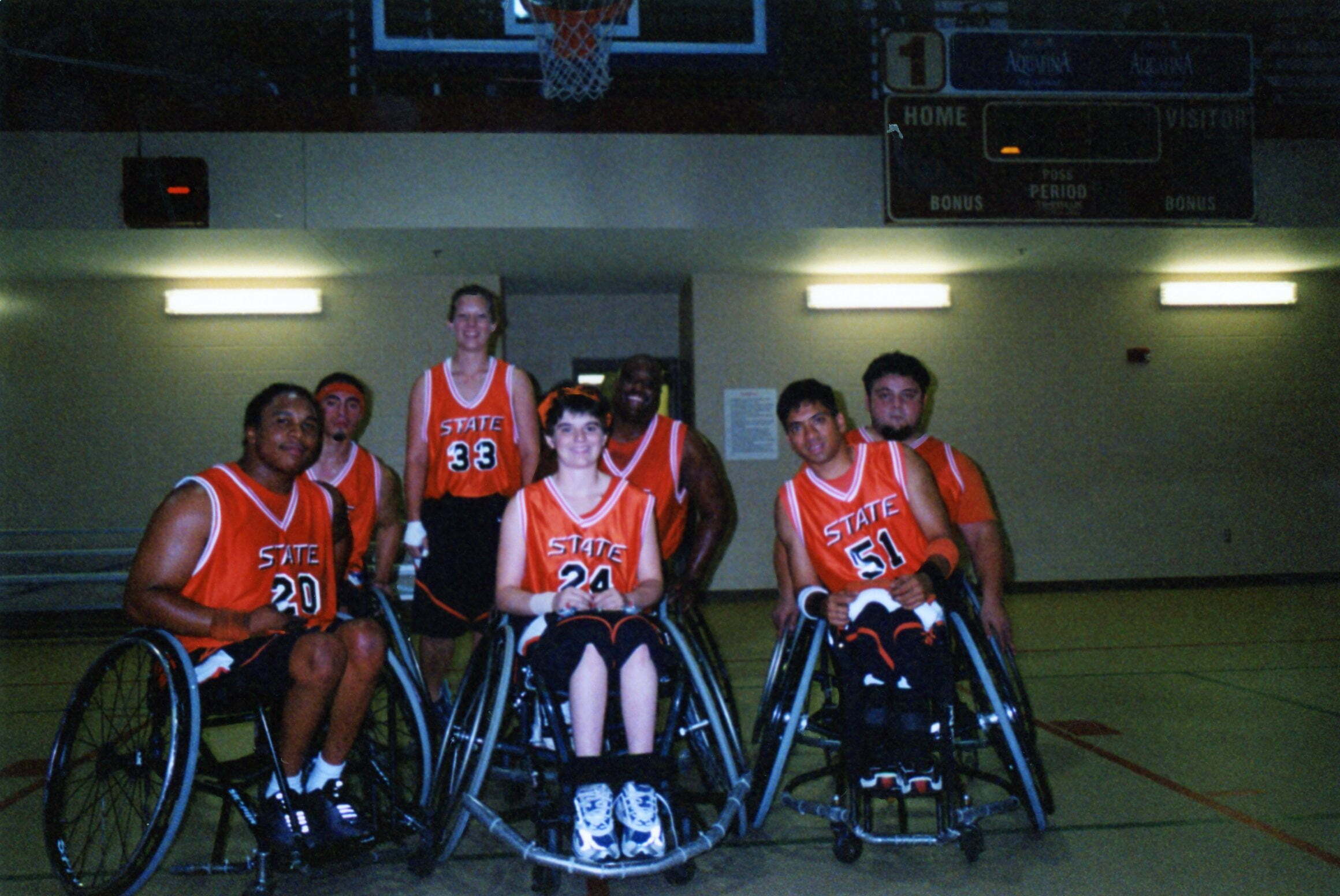 Nothing to play for — How many times have we seen that phrase this year, particularly as it relates to 2021-2022 Oklahoma State men’s basketball team?

The NCAA ban does mean OSU men’s basketball will not be playing in the NCAA Tournament. Life is not always fair. But is there really nothing to play for? I own a basketball that says that our beloved hall of fame coach, Coach Eddie Sutton, would beg to differ.

The alarm goes off. My groggy eyes read the large, red digital print: 5:30 a.m. I sleepily pull on my boots to do my morning farm chores. Then, I throw on my gear for high school basketball practice. As my father drives me to the 7 a.m. practice, he sarcastically asks, “Why do you do this? You have nothing to play for.”

I arrived for practice, took my three required asthmatic inhalers and put in my special contact lens for my single functional eye. It was a good day. I only got hit on my blind side three times during cross-court passing drills. Plus, it was a running day, and as a track-first and basketball-second athlete, I had great fun racing to be first in “suicide” sprints.

On game nights, the rural Warner, Oklahoma, gymnasium was bursting. The Chicago Bulls’ Sirius song blasted from the speakers during pregame. As the game went on, my bright red face dripped with sweat … from cheering on the bench. I never played a meaningful full minute in a varsity high school basketball game.

Another day, another alarm clock. I was awake and yet my body felt asleep. Thinking I had laid wrong, I wiggle until my floppy lower body is half-way off the bed. Holding my nightstand, I attempt to rise, only to collapse on the floor.

I later learn I was paralyzed from a really rare, progressive autoimmune disease. The out-of-state college track athletic scholarship I had earned vanished overnight.

By fate, I landed to the much-closer-to-home Oklahoma State University on a full academic scholarship … and in a wheelchair. It appeared there was nothing to play for.

My first week in OSU’s Drummond Hall was a disaster. I still had tubes hanging out of my body. My personalized manual wheelchair had been ordered but would take months to arrive. Thus, on Day 1 at OSU, I was in an old, borrowed electric wheelchair that promptly broke in the Drummond elevator. I rode that elevator for 2 hours before someone kindly pulled me out. On Day 4, there was a dorm fire that required evacuation. Two strong girls carried me downstairs from the fourth floor where I resided. However, in the chaos of students fleeing from smoke, my wheelchair was left atop the fourth-floor stairwell. It was 2:30 a.m., and the dorm crowd quickly dissipated to crash with friends elsewhere. Alone, I was beached on a curb as fire truck sirens pierced through the chilly night air. I heard a cop on the intercom, “We are looking for the person in a wheelchair on the fourth floor.” In my pajamas, I literally butt-scooted a block down the street to flag down a fireman who retrieved that second borrowed wheelchair.

Due to various required surgeries, I was delayed in getting to watch OSU basketball in person. My first time to Gallagher-Iba Arena was for the Remember the Ten ceremony. Hearing Coach Sutton and stories of those lost in the plane crash was one of the most inspirational and motivational events in my life. Little did I know that I, too, would soon be part of the beloved OSU basketball family.

Finally, my wheelchair arrived — a lightweight electric green manual wheelchair with a rock shox. Watching my reaction in my first test drive, you would think I had just gotten a brand new Camaro. With my custom, properly fitting wheelchair came freedom. And my ability to maneuver that wheelchair across water hoses and other obstacles as I raced from the Student Union to Engineering South, caught the attention of OSU wheelchair basketball coach, Ken Lee. Coach Lee asked me to try out for the team. Maybe I did have something to play for.

Alarm clock goes off at 5:30 a.m. Now the girl that never played a meaningful minute of HS basketball was readying herself for a 6:30 a.m. college basketball practice. As I pushed down the sidewalk from Drummond to the Colvin Center annex for practice, doubt clouded my head. I left that first practice physically spent but emotionally vibrant as I sped to my 8 a.m. engineering class.

The court, 3-point line, free-throw line, goal heights, rules, etc. is the same for wheelchair basketball as regular or “able-bodied” basketball. However, the larger space taken by the sports wheelchairs means athletes have to really think about angles, execution and, most of all, teamwork. Basketball IQ is more important to success than raw talent. And teamwork extended off the court as well. My teammates taught me how to do a “wheelie,” hop a curb, and most importantly, re-find my identity and confidence.

It was a long 16-hour drive to the University of Wisconsin for the Central Intercollegiate Conference wheelchair basketball tournament. The OSU wheelchair basketball team lived on a shoe string budget. We had a white van with no wheelchair lift. All the van seats were taken out and two air mattresses inserted on the floor for we disabled athletes to ride on. The wheelchairs were stowed in a two-stall white horse trailer, a hand-me-down from the OSU Equestrian team, which was pulled by our converted van.

Alone in the women’s locker room, I proudly pulled on my No. 24 Oklahoma State basketball jersey. It was a way-too-big, hand-me-down from the able-bodied men’s team. It looked like a sackcloth on me, as I tucked the armpit holes into my waist band. Yet, I felt like Cinderella. Not only was I a student athlete for Oklahoma State basketball, I played for the team. Though I was a starter, I was one of only two girls playing wheelchair basketball in the entire CIC, which was a mixed-gender league. The other teams treated me just like one of the guys, and they fouled me just as hard. Fortunately, despite my smaller stature (even by wheelchair standards), I was a better than 80% free-throw shooter.

Frankly, our very small and under-funded OSU wheelchair basketball team was not ultra competitive. Certainly, there was no NCAA Tournament equivalent to motivate our play. Yet, we were genuinely thankful to be student-athletes at one of only eight universities at that time with a wheelchair athletics program that gave us this wonderful, life-changing opportunity. Given the long travel, we played seven games in two days at each tournament. It was grueling, yet magnificent.

My senior year, I was named a Wheelchair Basketball All-American and played in the All-Star game. Once again, the Bulls’ Sirius song streamed from the loud speakers in pregame. After the opening tip, I took the ball down court and hit a contested 3-pointer to the ferocious cheers of the crowd. I still remember the large blond-headed male, whose hand was directly in my face during the shot, sheepishly shrugging and smiling as the ball swished through the net.

I had everything to play for, even if it was not always obvious. God blessed me with a tenaciously persevering spirit, which enabled me to literally keep pushing onward. I was so blessed to be at Oklahoma State, which happened to have both a wheelchair athletics program and an engineering program, that positively changed my life forever.

To celebrate my Oklahoma State success on the basketball court as Basketball All-American and off the court as National Goldwater Scholar and OSU’s first USA Today Collegiate Academic All-American, Coach Eddie Sutton signed a basketball for me that said, “Always have faith in God, yourself, and the Cowboys.” If we all lived by Coach Sutton’s wonderful pearl of wisdom, would we never, ever say we had nothing to play for … in sports or in life.

Cassie Mitchell graduated from Oklahoma State University in 2004 with a degree in Chemical Engineering. She tried out to be a member of the Team USA Women’s Wheelchair Basketball team to compete in the 2004 Paralympic Games in Athens, but narrowly missed making the team. Unfortunately, Cassie’s disability progressed shortly after her graduation, rendering her a quadriplegic (impairments in all four limbs) and unable to play elite wheelchair basketball. In an ironic circle of life, Cassie returned to track & field, competing in the female quadriplegic division. Cassie competed in Paralympic Track and Field in the London 2012, Rio de Janeiro 2016 and Tokyo 2020 Paralympic Games, becoming a three-time Paralympic medalist for Team USA and currently holds six world records in the women’s quadriplegic T51/F51 classification. In 2016 and 2020, Mitchell won Paralympic medals despite training and competing through a leukemia diagnosis and treatment. Dr. Cassie S. Mitchell is now a professor in Biomedical Engineering at Georgia Institute of Technology and Emory University in Atlanta, GA.