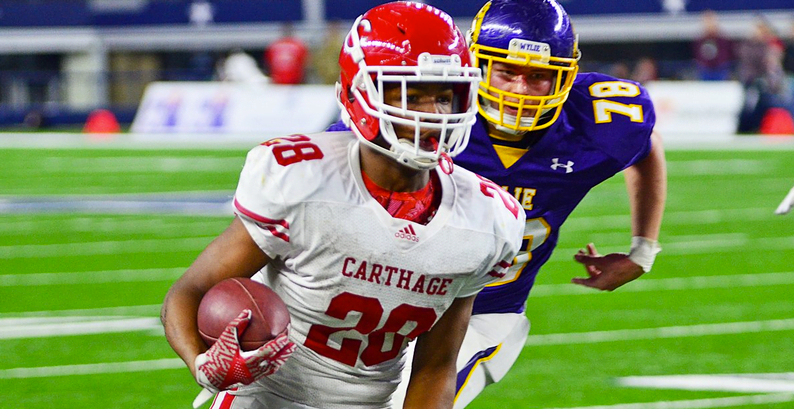 Replacing an ace recruiter like Marcus Arroyo to coach the running backs won’t be an easy task for John Wozniak. Coming from Southern Miss, he will be tasked with starting a new slate, building new relationships, and bringing in talent to compete in Stillwater based off previous relationships and his own eye for talent.

Most of that early transition starts with previously formed relationships with the OSU coaching staff, fortunately, and Wozniak is likely to pick up where Arroyo left off before he quacked his way to Oregon. Here are several names to watch as OSU hones in on targets and builds its 2018 recruiting class.

A speedster out of Arizona, Jordan emerged as a target under Arroyo as an intriguing target. He’s a scatback with elite speed and, at one point, appeared destined to explode onto the national scene. However with offers from Hawaii, Iowa State, and Kansas State, schools are cooling on him — including OSU.

While OSU has him squarely on its radar, Jordan is a smaller prospect at 160 pounds, and concerns for him being able to withstand punishment at the Big 12 level are legitimate. Regardless, he has a high ceiling. He also seems to be a more long-term development project.

Four-star athlete Jaylen Waddle has long been on the radar before Wozniak arrived, but he’ll stay on it as OSU continues to hunt for athletes. Waddle is a swiss-army receiver/running back who OSU wants to use in a number of ways on offense, and at 5-foot-10-, 175 pounds, he has a Tyreek Hill-esque game with burst, speed, and athleticism.

Unfortunately for OSU, the connection between Waddle was solely reliant upon Arroyo. This was Arroyo’s dude. Landing a prospect of his caliber was going to be a tall task, and doing so without Arroyo makes it all the more difficult.

Straight out of SEC territory, Tae Provens is a hot commodity with offers from Auburn, Tennessee, USC, and Ole Miss. But the connection and interest between OSU and Provens is for real, having recently named OSU in his group of schools he remains in contact with.

As you can see from his 247sports crystal ball indicator, Ingram is a 100 percent Texas lean according to recruiting gurus. Out of Carthage, Texas, Ingram is a talent that is being pursued by more than 30 schools and ranks as a consensus four-star prospect among recruiting services.

While I do think OSU is trying to make in-roads with Ingram, I feel it’s likely a battle best spent elsewhere. With the likes of OU, Arkansas, Texas, and UCLA banging down his door, it may be a lost cause throwing Wozniak into the game late to try and make up ground that many schools have held for years.

Dixon is the latest name to emerge in the search for Woznia k, having offered earlier this week. The three-star recruit from Georgia holds offers from Alabama, LSU, Georgia, etc…. and he’s a name to watch because he’s uncommitted having a majority of those offers for an extended period.

Large schools like Bama, Georgia, LSU waste no time in holding spots for players. So by the time Dixon decides, his options may be more limiting — indicating he may have passed on them. He’s only landed 3 offers since October: Minnesota, LSU, and Oklahoma State. So keep an eye on Dixon, because I think the Pokes have a chance to make a late play on him.