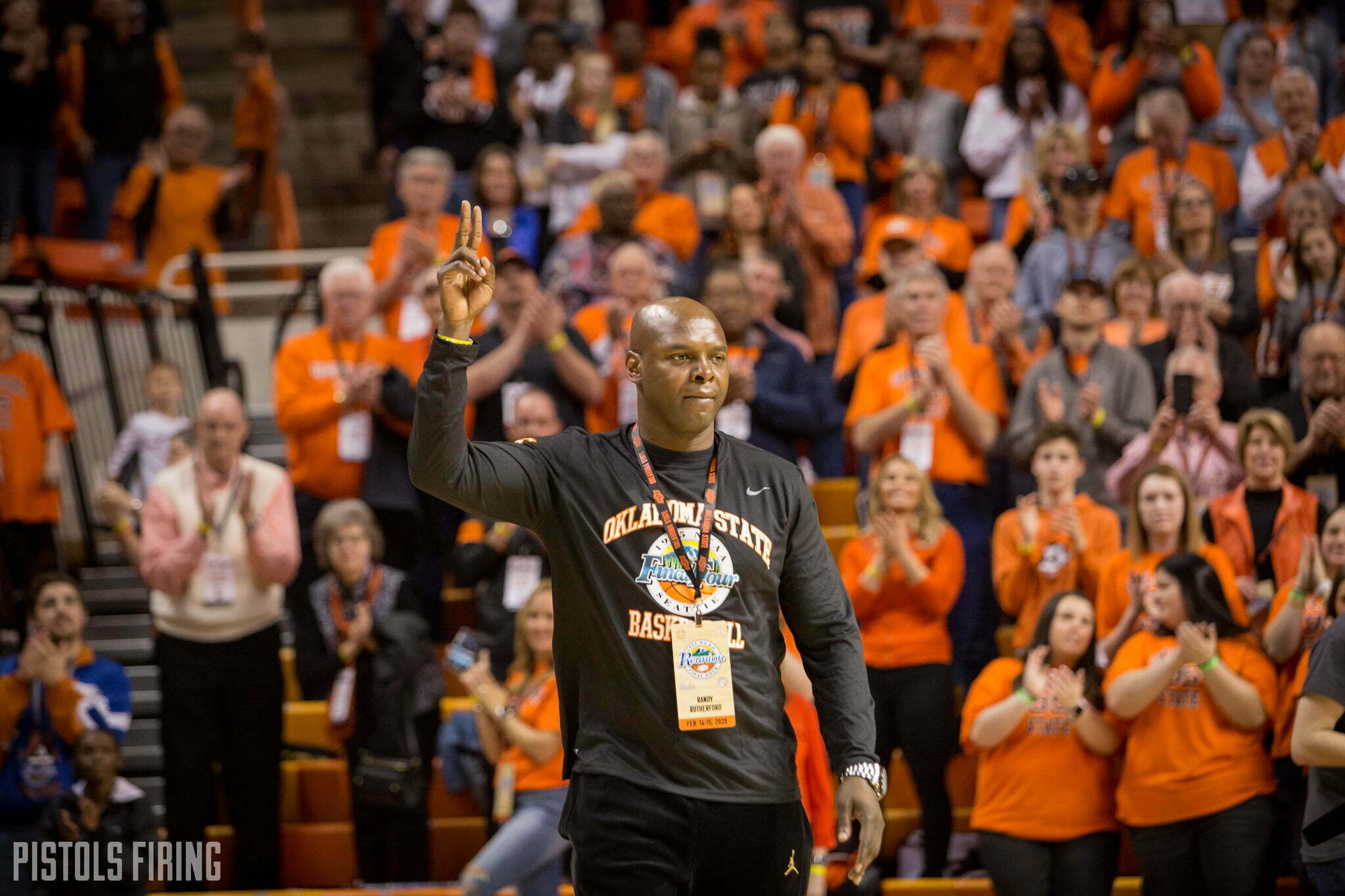 I said I wanted to watch something from the pre-GIA renovation era of Oklahoma State hoops, and I’ve got a game: Bedlam 1994.

For reference, I was born in 1995, so I definitely have never seen this game. If you’d like to follow along, here’s the game via OSU Athletic’s YouTube channel.

Here are other games I’ve watched for the first time:

Let’s jump into it.

• I believe this is my first taste of full-game Bryant “Big Country” Reeves. I’ve seen plenty of highlights, but never a full game.

• Interesting that Burley took the opening jump ball instead of Big Country.

• The court is a thing of beauty. More black than orange. Looks more intimidating.

• Brooks Thompson got fouled on an early 3-point attempt. The color commentator said he was a “good actor” in drawing the foul. I was told my soft generation invented the flop. Tough look on the olds.

• The announcers have twice mentioned how hot it can get in the arena. OU coach Billy Tubbs and his staff went golf sweaters instead of blazers to try to combat the heat. Sounds like my high school gym. I also like that. Let’s get uncomfortable.

• Sooners starting hot and lead 7-2. I believe this is the ESPN broadcast of the game. The score and time aren’t always shown. Why was that ever a thing?

• Tough start for Big Country with a pair of turnovers, but he hit a silky turnaround jumper to make it 9-4. All the stories I hear about him involved him breaking backboards, but there is some nice finesse there.

• Rutherford hits a 3, and GIA is almost literally bouncing. I like the pandemonium the smaller gym creates.

• Big Country was 1-for-8 from 3 in his career. This wasn’t the make, but if it went in students might have stormed the floor.

• OU up 21-16 with 7:53 left in the first half. Reeves has a hard time drawing fouls because he is manhandling the poor soul who is guarding him. The guy is holding on for dear life.

• OU with nine offensive rebounds to OSU’s two. Doubt Eddie Sutton is too happy about that.

• A Big Country put-back jam cuts OU’s lead to 25-23. The Sooners have switched to a 2-3 zone. A problem with a zone is defenders don’t know who to block out. Probably oughta block out the 7-footer.

• Thompson hits a 3 to give the Cowboys their first lead at 26-25. Really like Thompson’s jumper. First time I’ve seen him play I’m pretty sure.

• Jeff Webster is hooping for OU.

• Big Country played the entire 20 minutes. Was that a normal thing? Is he about to put in a full 40?

• Sean Sutton was coaching with a mullet in Stillwater before it was cool. 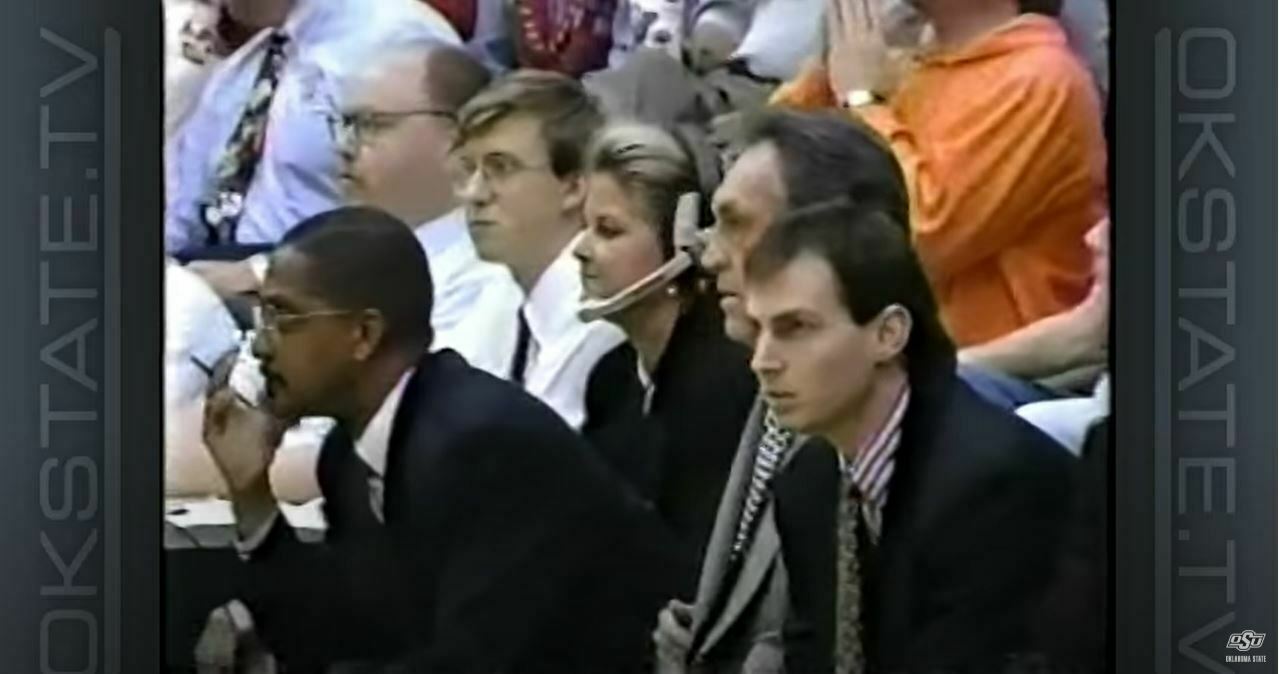 • Rutherford is getting going with back-to-back 3s. OSU takes the lead with the latest.

• Scott Pierce and Webster crash to the floor. The commentators say Webster did a lot of acting. SMH at flopping. It’s ruining the game. Back in my day there was none of this. Not unless you were bleeding did someone call a foul. Such a soft generation.

• Three straight Rutherford triples. Having him and Thompson on the same team is quite the treat.

• Reeves finally getting a breathier. Maybe he went out in the first half and I missed it, but I’m fairly certain these are the first minutes OSU is playing this game without him on the floor.

• Aaannnd he’s back. I don’t know that he was out a full minute.

• A “Sit down Billy” chant breaks out. Tubbs wanted a goaltending call.

• Rutherford again! He has five makes in the game, all 3s. He’s made his past four.

• Large Rural on both ends:

• Reeves goes back to the bench. Probably not for long. … Answer: Not even a minute again.

• That last triple was Rutherford’s seventh 3, tying a record at the time. He casually hit N. 8 in the final seconds. The next season Rutherford would hit 11 in Allen Fieldhouse, which is still a program record.

• Brooks Thompson just ruthlessly scored an and-one when he could’ve dribbled out the clock. He would’ve made a good Blue Devil.

• Fans are throwing foam Pistol Petes on the floor. Billy Tubbs is ticked and just got tossed. This is some peak Bedlam.

• What a terrifying walk to have to make.

• There are two seconds left but a lot of free throws to be shot. Thompson has to convert the and-one. There was a tech called on the OSU crowd for throwing stuff onto the floor. Then the tech on Tubbs.

• The disrespect as Burley shoots a 3 at the buzzer. It missed, but sheesh.

• That might have been the most fun I’ve had watching one of these.

• Big Country was unstoppable, Rutherford was unconscious and smaller GIA is a lot of fun.

• The intimacy of GIA seemed to make it even more crazy. I understand why it was expanded, but that looked like a lot of fun.