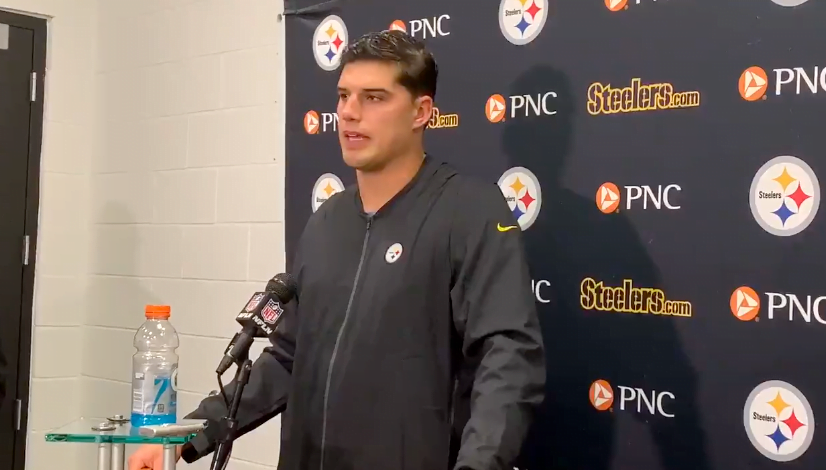 Mason Rudolph was all of America on Thursday night. After Browns defensive end Myles Garrett ripped Rudolph’s helmet off his own head and, quite literally, used it as a weapon, the Steelers quarterback called a spade a spade in his postgame press conference.

“I don’t know what the rules are,” said Rudolph. “I know it was bush league, total coward move on his part. I’ll take it. I’m not going to back down from any bully out there.”

Garrett appeared to strike Rudolph on the head with his own helmet, which was scary in itself but especially so considering Rudolph suffered a pretty serious concussion earlier in the season that forced him out of action. Rudolph, though, said he was fine and was in surprisingly good spirits despite the loss and the pounding his head took.

“I’m fine, I’m good,” he said. “I don’t know (if he got my flesh with it). I remember getting hit by a lot of people. There’s plenty of tape out there to watch. I’m not going to speak for what may have happened.”

So what, exactly, caused this whole deal?

If you find out the answer to that, then the NFL may want to talk with you. Garrett sacked Rudolph, Rudolph appeared to take umbrage with it, the two exchanged pleasantries … then boom. Massive dust-up.

“I got sacked, he had some words and kept on keeping on and one thing led to another,” Rudolph said. “You can watch the tape, go back and check it out and make your own assumptions.”

"Where did it cross the line? Maybe when he took my helmet off and used it as a weapon." – Mason Rudolphhttps://t.co/8azcNxTE3n pic.twitter.com/A29WlzdhWQ

As for Garrett, he stopped short of an apology after the game but admitted he made a boo-boo.

“I made a mistake, I lost my cool,” he said. “It’s going to come back to hurt our team. The guys who jumped in the scrum, I appreciate my teammates having my back but it shouldn’t have gotten that far. That’s on me.”