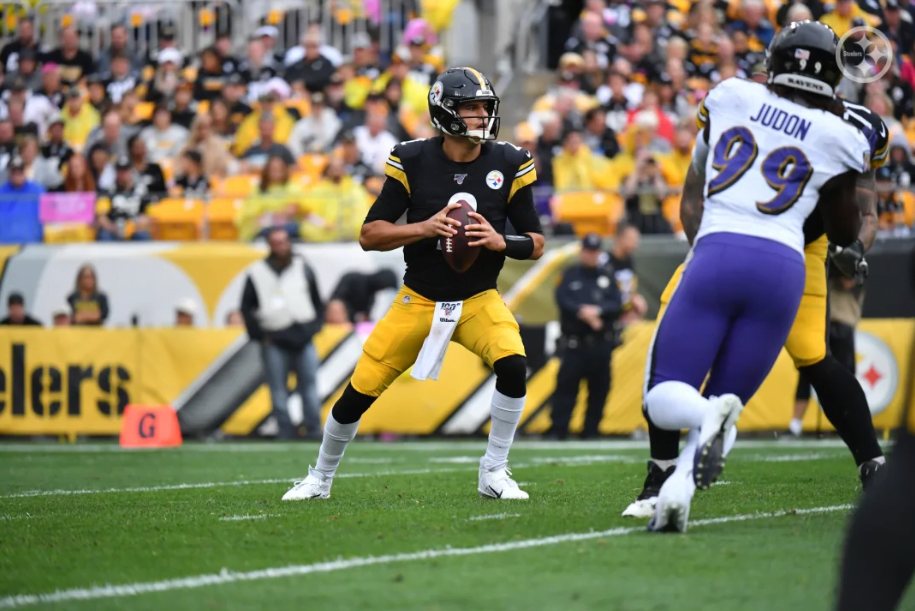 Mason Rudolph took a nasty head-to-head hit from Baltimore safety Earl Thomas on Sunday during the third quarter of the Steelers’ 26-23 overtime loss to the Ravens. He was eventually helped off the field and ruled out with a concussion and then sent to a local hospital.

The good news is that, after being admitted to the hospital with a concussion, Rudolph was able to go home.

Steelers QB Mason Rudolph is home from a Pittsburgh-area hospital and doing well, according to a source. Good sign after suffering a concussion on the Earl Thomas hit.

Steelers’ QB Mason Rudolph was allowed to go home from the hospital tonight after being concussed earlier in the day, per source. Rudolph now is resting at home and will be in the NFL’s concussion protocol, a best-case scenario after the hit he took from Ravens’ S Earl Thomas.

It was a scary scene that left several on hand visibly shaken up including Pittsburgh wide receiver JuJu Smith-Schuster.

Nothing easy about seeing your teammate going down, and you could tell Mason Rudolph's injury really struck JuJu Smith-Schuster deep (@TeamJuJu). #HereWeGo

"I was praying to God that he gets up, he's our quarterback, he's our guy. pic.twitter.com/DIlrUKIqRS

Mason Rudolph about to be taken off on a stretcher. Has been lifted to his feet and thankfully is talking and moving. Players were visibly shaken, including Ryan Shazier who experienced a potentially life-altering hit not that long ago

Several of Rudolph’s current and former teammates, fellow NFL players, and talking heads expressed their concerns and vowed their prayers and well wishes.

Prayers up for my brother! That looked scary @Rudolph2Mason 🙏🏾

Prayers up to @Rudolph2Mason get better big dawg🤞🏽🙌🏽🙏🏽

Mason and I talked over the phone. For however many seconds, I was scared about losing my friend, and then God answered my prayers. I love you @Rudolph2Mason

Praying for you bro! 🙏🏾@Rudolph2Mason

'We love Mason. I love Mason. When stuff like that happens, it makes a trigger go off in your brain and you have to control yourself.' – @Bud_Dupree on how tough it was to see @Rudolph2Mason laying on the field injured today

Earl Thomas, who made the hit, explained that he did not intentionally injure Rudolph and that he was worried about him.

Earl Thomas on his hit that knocked Mason Rudolph out of the game: "I didn’t try to intentionally hurt him. I’m worried about him. I heard he’s at the hospital. My prayers go out to him and his family" pic.twitter.com/axAewwJNI3

Mason Rudolph just got obliterated by Earl Thomas and appeared to fall down to the ground completely knocked out. I’m hopeful he’s OK. It looks scary.