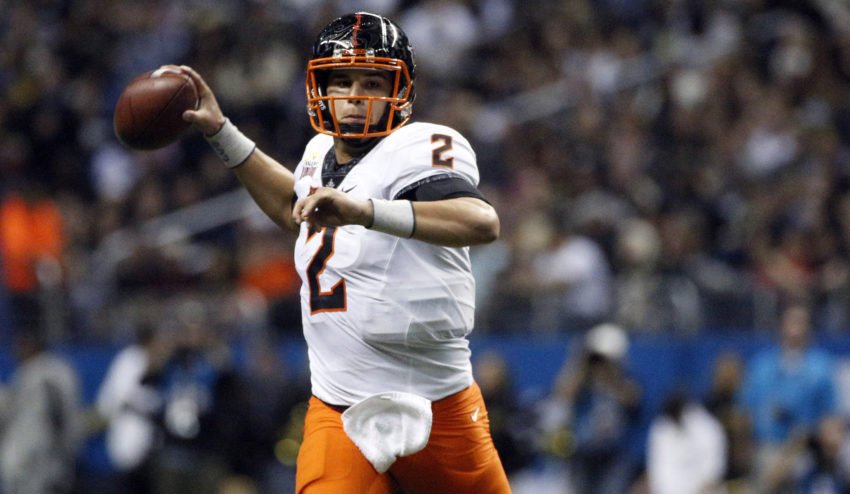 Oklahoma State quarterback Mason Rudolph’s 2016 numbers were impressive. Not only did he have 28 touchdowns and only four interceptions, but the senior-to-be racked up over 4,000 passing yards and capped a successful 2016 season with an emphatic 38-8 win over Colorado in the Alamo Bowl.

His name is constantly being thrown out in the preseason as a potential early-round draft pick and a serious contender for the Heisman Trophy. But in order to do that, Rudolph is going to have to fix one major foible in his game, and that’s his performance away from home.

Rudolph tore up teams at home in both 2015 and 2016. This year at Boone Pickens Stadium, Rudolph had a quarterback rating of 173.6, which would put him at second in the conference behind Oklahoma’s Baker Mayfield. But his away QBR of 138.5 would tie him with Iowa State’s Jacob Park, who was sixth among Big 12 quarterbacks in 2016.

Even with more simplistic statistics, the difference is clear. Rudolph’s completion percentage, which is used to determine one’s QBR, was 65 percent at home and 60 percent away in 2016.

His career stats tell a similar story. There is a Home Rudolph and a Road Rudolph, and it seems at times they are completely different players.

The South Carolina native often didn’t look as comfortable in away games, often fumbling the ball or making silly mistakes. Against Oklahoma in the season finale, Rudolph arguably had his worst game of the season.

Rudolph struggled away from home in 2015 as well. He had a number of mediocre performances, including his three-turnover performance against Texas (including a pick-six and scoop-and-score) and a three interception game against West Virginia (in which he also had a safety). Both games OSU somehow won.

Statistics are one thing, but most importantly, Rudolph just looks different away from home. The biggest thing with Rudolph isn’t necessarily the stats or the gaudy numbers. It’s the eye test.

Without context, his 2016 stats would indicate that he is an NFL-ready quarterback with gaudy college numbers and excellent size. But after watching his performance throughout the season, there were times where he just didn’t look ready for the next level. So it’s not that Rudolph always performed significantly worse when not on OSU’s turf. He just looked different.

This is not to say that he didn’t have clutch performances on opposing team’s home fields. 2014 Bedlam and 2016 Kansas State are excellent examples of Rudolph taking control, especially in the clutch. There’s no doubt that Rudolph is a good quarterback. But don’t think that he’s coming back to OSU just to win a championship; he has some growing to do as a player, too.