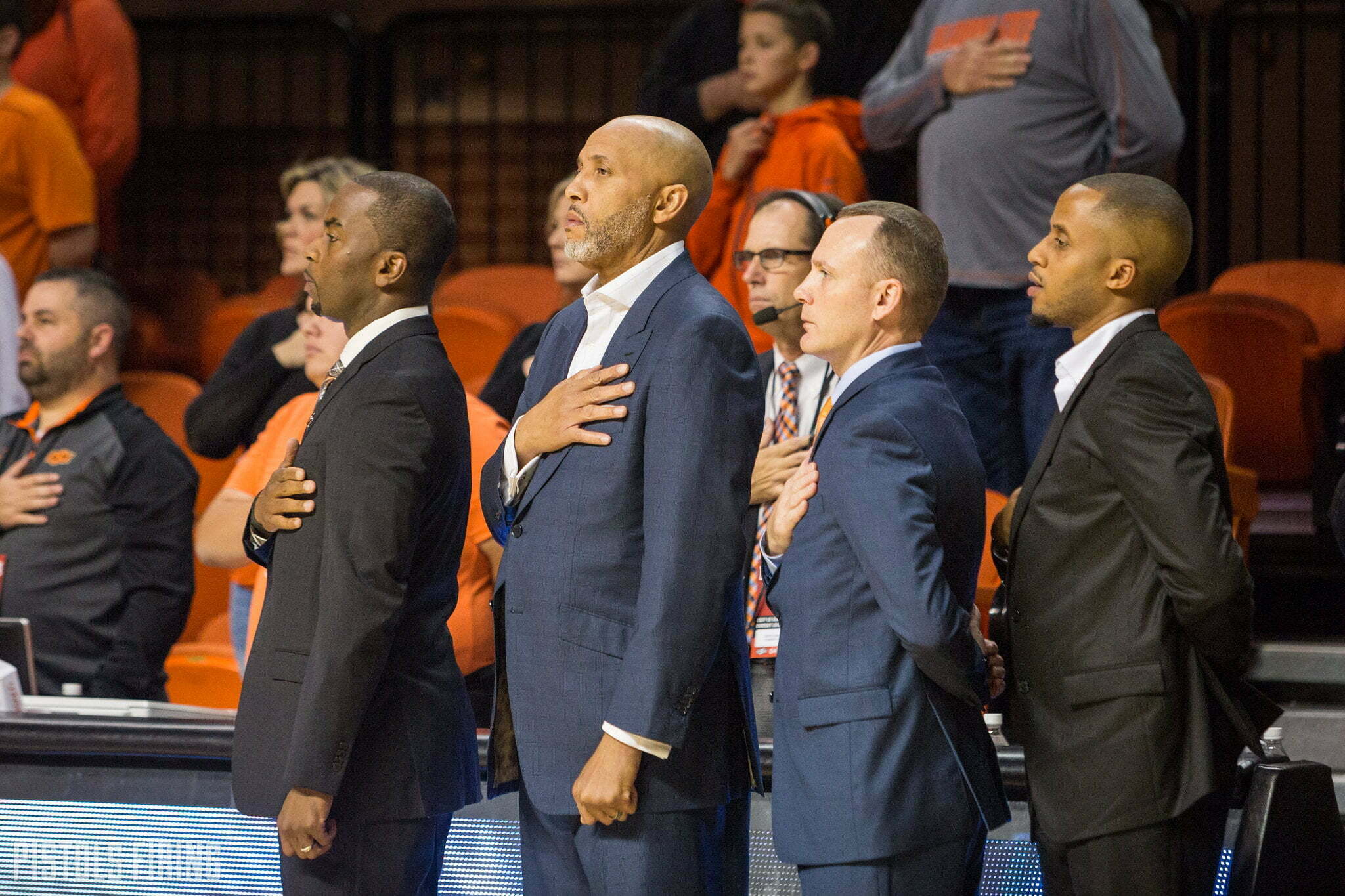 On Monday, Mike Boynton met with his staff and then with his team in what he described as the most challenging meetings he had ever been a part of, more challenging than the first meeting he had with his team after former assistant coach Lamont Evans was arrested before his first season.

Boynton said he wanted the meetings to be authentic, and he wanted to reemphasize that George Floyd’s death wasn’t a one-off, but hopefully, this situation leads to another step forward in race equality in the United States.

On Thursday morning Boynton, Oklahoma State’s basketball coach, met with a handful of media via Zoom where he discussed how he is handling this situation personally and the interactions he is having and plans on having with his team during it.

“I did tell (the team), they’re in kind of a unique predicament as college athletes,” Boynton said. “They’re pretty well protected, specifically in our campus setting. But they don’t spend their whole time here, and they don’t wear those uniforms all the time.

“They are looked at very differently without their uniform on then when they do have it on. They just have to be mindful that they don’t get totally immersed in this bubble that we have them in a lot of times that celebrates their achievements and their athletic prowess, but understand that when they go out in the real world they need to be very conscious and aware of what’s going on around them.”

Some members of Boynton’s team have taken to social media in support of the black community and even get somewhat political. Boynton said he won’t tell them what they can and can’t say, but rather he feels it’s important that they be authentic to themselves at this time. Boynton’s team next season looks to have just one white player on it, in Hidde Roessink, who is Dutch.

“I do tell them to think about the consequences of those things because the reality is, you don’t get to say anything or do anything just because you feel a certain way, but you are allowed to express if something’s bothering you,” Boynton said. “My message to them is, if you’re going to a protest, be smart. Understand the level of organization that there is. Be mindful that there could be people that aren’t a part of trying to make things better that could come in and make it look bad.

“Awareness is of the utmost importance, but I certainly don’t try to discourage them or give them a way to handle it. These are really unique moments, and I think they need to feel like they were able to be their true self through it.”

Stillwater held a peaceful protest Wednesday, and Boynton attended it.

“I’ve always encouraged them, but I’ll probably be more active in helping them understand what impacts that process has,” Boynton said. “I won’t make anybody do anything because those are personal decisions. I go to church all the time. I encourage the players on my team what that means to me. As their leader, I believe in that, but I don’t make them go to church with me. If any of them want to, I’ll pick them up and take them. But those are personal choices they have to make.

“Participating in this process of … I don’t even like the word politics to be honest, but in our system of how our country works is important. It’s going to affect them. They don’t understand it. I didn’t at 18, 19, 20, but they’ll understand it when they have children and these policy and decision-makers impact the schools their kids are allowed to go to and neighborhoods and resources those neighborhoods that they live in have. The quality of the fire department, the quality of the hospitals, the quality of healthcare, the quality of the education, those are things that all come from this system. So, yeah, I’ll be much more vocal about the impacts of voting or not voting can have on their lives.

Boynton also mentioned some comments New Orleans Saints quarterback Drew Brees made yesterday. For those unaware, Brees was recently asked his thoughts on NFL players kneeling during the national anthem, and he responded, “I will never agree with anybody disrespecting the flag of the United States of America or our country.”

That stance of disrespecting the flag is something that those kneeling protestors have combated since it started happening, saying it isn’t about the flag or the troops it’s about racial inequality in the country.

Brees, after being slammed on social media, has since walked back that statement a bit, apologizing in an Instagram post. Boynton mentioned Brees’ apology and didn’t come out angry at the quarterback, but did give some more insight.

“It’s a hot topic now, I’m sure you guys are aware Drew Brees, well-respected football player, very, very good, he made a comment yesterday on the radio,” Boynton said. “And I don’t remember the question verbatim, but he immediately pivoted away from the issue. So until we can say, ‘I hear what you’re saying, let’s try to figure this out together,’ we’re going to continue to have conflict. Because you can’t take a question about people saying, ‘Hey listen, we have a problem,’ and then talk about another topic because the two won’t ever be able to help each other. I stand for the national anthem myself, every single game. I encourage our players to do so. I put my hand over my heart, but I understand when people say, ‘Hey, please understand we have problems that I would like to talk about, and I’m going to take this moment to bring some attention to it.’

“If people keep saying it’s not about the flag and you keep telling them what they mean, then you can’t help the situation.”

There are a ton of angles this situation provides, and it’s difficult to encapsulate in all at once, but here is the Boynton quote I’ll leave you with.

“I don’t think this is purely a black and white deal, it’s not,” Boynton said. “It is a love and hate deal. It is a justice and it’s a systematic problem. The racial part comes from the history of our country, and we have to accept that also. That’s us. That’s not something that I would image as Americans, any of us are proud to say happened here, so if the system was set up and designed to start off for 400 years of, ‘These people work for us to live well,’ then the next advance is ‘OK, you don’t have to work for us anymore, go do something else. We’re not gonna help you do anything else,’ then it goes to, ‘You’re three-fifths of what I am,’ like slow, ‘don’t vote, don’t participate in this, we’ll dictate to you what you can and can’t do.’

“Every step forward is good, but we still aren’t all the way there yet.”