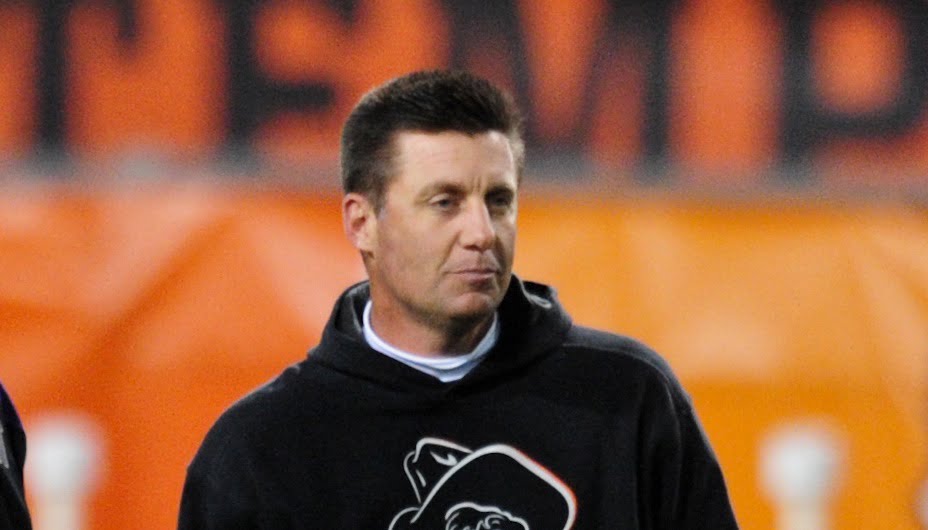 Mike Gundy is back, you guys.

I mean he is back.

On Wednesday the ball coach held court for an hour with various members of the media[1. Actually four including a member of the cheer squad named Robert Allen.] and discussed his starting QB, the O’Colly, his running back problem and…spelling tests.

We’ll get to the other stuff in a little bit but for now let’s look at the grenade Gundy launched in the direction of the Daily O’Collegian.

I wrote about the issue at hand in December after the O’Colly posted a headline entitled “Gundy Be Gone” and wrote “Gundy didn’t want to be (at the press conference on Monday). After this season, the O’Colly thinks maybe it’s best that he isn’t.”

These are actual words I wrote as a follow up to that! (#NostraPistols)

All of this goes away, too, if Gundy wins Bedlam and/or OSU starts out hot next season with Mason Rudolph at the helm.

He’s once again lauded as the quirky, crazy brainchild of a wild midwestern offensive-minded football program who makes too much money to coach a bunch of 19-year-olds to within reach of a conference championship.

That moment feels a long away from this one but I really don’t think it is.

Gundy was given plenty of ammunition for a rebuttal to the O’Colly (after over a month, no less) from the fact that most of what I proposed actually, gasp, happened.

On Wednesday he used it. Oh did he use it.

Why Gundy is mad

“The first thing that came to mind was that it was probably (written by) some college punks,” said Gundy. “You’ve got to realize who the source is.”

“Young people that put out something like that, that is a big statement,” he said.

“When you say something like that, you had better make sure that you can back that up and that your information is good because you are stepping out there…You should not be influenced by people (who) don’t put their name on it.”[1. The piece didn’t have a byline other than the name of the paper. A “staff piece” as it were.]

Now I’m not sure how anyone from the O’Colly would “back that up” because it’s not like they’re in charge of the employment of anyone making decisions at OSU. They had an opinion and they gave it.

Gundy saying that sort of seems like a “I beat OU I can say whatever the **** I want right now” statement.

“They are trying to do something to make themself something and what they don’t understand…I’ll be real candid with you, it’s like right now that I’m not a real big fan of sports talk radio.”[1. He said this to Robert Allen, by the way.]

I actually agree with this which is kind of funny because it’s sort of my job to highlight and exacerbate explosive sports content on the Internet. Still, I value quality things and not just throwing spaghetti against the wall to see if it’s done.

“I didn’t read it and they (friends) told me the brunt of it and I really didn’t think anything about it and that’s just some punk college kid that doesn’t have a clue,” Gundy concluded. “I could really care less to be honest with you.”

He actually meant “couldn’t care less” which is actually not true[1. That ain’t true!] because he just went on a multi-paragraph tirade about the whole thing.

I thought at the time it was a fairly reactionary for the O’Colly to print what it did though I will say it’s a LOT easier to sit here on January 15 and be-downgrade it for what it was than when it was written in December.

The two main points in all of this are as follows:

1. We are too in-the-moment reactionary to various events. God forbid we collect more than one game’s worth of data and evidence to draw a conclusion on something.

Gundy is right about that. I call it the LeBron Possession Theory.[1. OK, I just made that up in the last 30 seconds.]

For a few years it felt like every playoff possession from LeBron would make or break his career. It was infuriating. Let him finish the season! The series! The game! How about just the quarter?!

That’s the nature of it, though.

There’s more space to be filled in 2015 than ever and inevitably it’s going to be filled with nonsense at times (this blog isn’t immune to that) because to build something that’s nuanced takes a lot of time, a lot of effort and can’t be shipped daily or hourly.

2. Gundy is letting the swagger hang, isn’t he? I mean he just went 7-6 and scraped his way into a bowl in which he used a defensive lineman to lead his team offensively and he’s letting it ride like he just picked up Urban Meyer to coach the offense.

His “you came at the king and you missed” attitude is fine, I suppose, but the reality is that this season was really bad until the OU game and he was doing a terrible job handling the media and managing the perception of the program.

We forget all that because Tyreek in Norman and the defense is so young and WE HAVE OUR DANGED QUARTERBACK IN PLACE NOW but all of that doesn’t erase an atrocious two months in the middle of the year.

Gundy is back, though, so I’m not sure any of it — the losing streak, the QB whiffs or what was written in the paper — even matters anymore. In fact I’m pretty sure it doesn’t.

Quotes via Tulsa World and Scout — go read those stories, they have a ton of great quotes from Gundy. Even more than I included here.