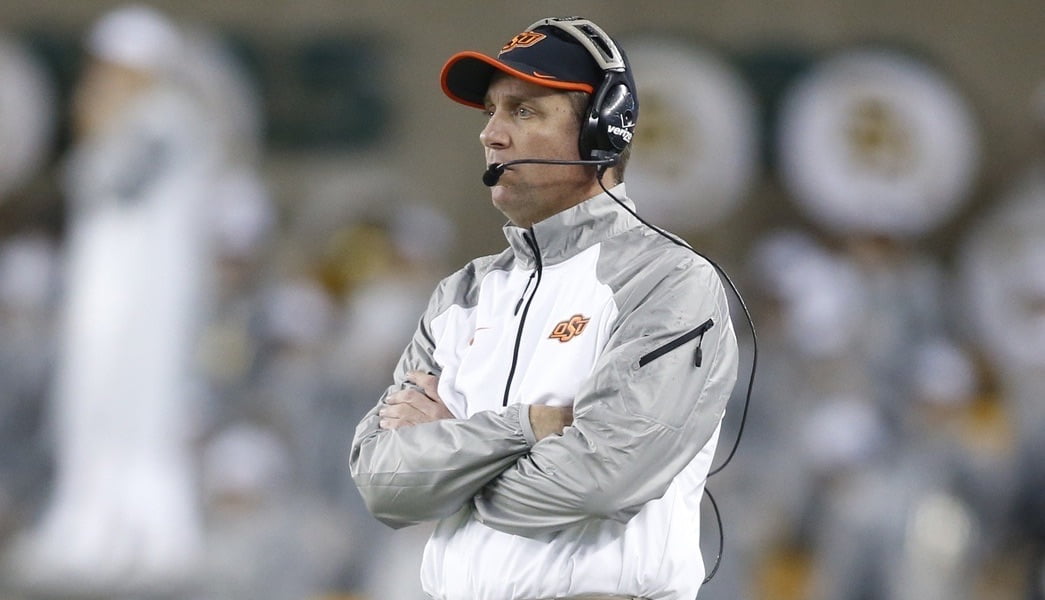 How long will Mike Gundy last in Stillwater? (USATSI)

You sort of knew this is how this week was going to end.

After Mike Gundy’s crazy press conference on Tuesday you knew there was the chance that somebody — a publication, a media member on Twitter, somebody — would call for Mike Gundy to move right along after this season.

John Klein sort of did it but he framed it as a benefit to Mike Gundy to walk away (it’s for his own good!) so it didn’t get as much attention.

Then on Thursday night the O’Colly went all in on it. Here’s how it started.

“Gundy didn’t want to be (at the press conference on Monday). After this season, the O’Colly thinks maybe it’s best that he isn’t.”

“Depending on where he went, Gundy might have more recruiting potential. It would be a fresh start. It could mean a bigger payday, a chance to do bigger and brighter things than what he’s done for OSU.

But this is his Yankees job, right?

It should also be noted that the headline of the piece says “Gundy Be Gone.”

I want to be fair to the folks who worked on this — their entire coverage of Gundy this week has been far more nuanced and detailed than just this one column.

But yeah…this calling for Gundy to be gone thing is. Well it’s drastic to say the least.

And the logic isn’t sound. Here’s what they said about a transfer of power.

“It’s getting to the point where Gundy is doing the university a disservice with his complete disregard for public relations.

Sure, he’s a tremendous football coach, but there are plenty of people around the country who can coach football. Most of them would likely do so in a way that’s far less abrasive than Gundy’s.”

The first part is true. Gundy is on a warpath with a AK-47 and nobody will even think about getting in his way.

The last part, though, I’m not so sure about the last part. I wrote earlier this fall about how the overlap of really good football coaches and coaches who would stay in Stillwater for 10 years is not a big overlap. I could be wrong about that but Texas, Florida, and Michigan would probably disagree.

It’s hard to find a good football coach and, while Gundy’s press conferences are little more than an exercise in him trying to measure just how bulletproof that vest really is, they remain (for now) the collateral damage of having the winningest coach in Oklahoma State history.

Gundy should not be canned. Not this year. Not next year. And not the year after. Not because he was a great player for OSU or even because he’s a native son.

The reason there should be no question that Mike Gundy is the head coach of Oklahoma State is because the trajectory of the first nine years of his career has been nothing but elite. This year is a one off (for now), an outlier, a bump in the road.

I’ve thought a lot about success and what it means for a coach in college football in 2014 (mostly because of the Nebraska situation) and I find “played the final game of the season for a conference or division title in three of the last five years” to be more than adequate. Especially at OSU.

And that’s sort of the point.

After I read the O’Colly piece on Thursday night I laughed a little to myself when thinking about traveling back in time to 2000 and telling myself the following:

Your school will win a Big 12 title and 36 months later the coach of that team (who will have gone 24-14 after winning that Big 12 title) will be maligned by the school paper to the point that they would be pleased with his firing.

Now I understand that this is about more than football but Gundy has done nothing publicly or anything even close to warrant somebody even thinking about giving him a pink slip.

Are his press conferences becoming of a high-quality college football program? No.

Are they fun? No.

Are they beneficial to him in recruiting? No.

But unless there’s a lengthy list of behind-the-scenes transgressions that Bobby Petrino would whistle at then I’m only left with the conclusion that Gundy doesn’t much care about any of that which, until this year, has been a fine modus operandi and far from a fireable offense.

All of this goes away, too, if Gundy wins Bedlam and/or OSU starts out hot next season with Mason Rudolph at the helm.

He’s once again lauded as the quirky, crazy brainchild of a wild midwestern offensive-minded football program who makes too much money to coach a bunch of 19-year-olds to within reach of a conference championship.

That moment feels a long away from this one but I really don’t think it is.