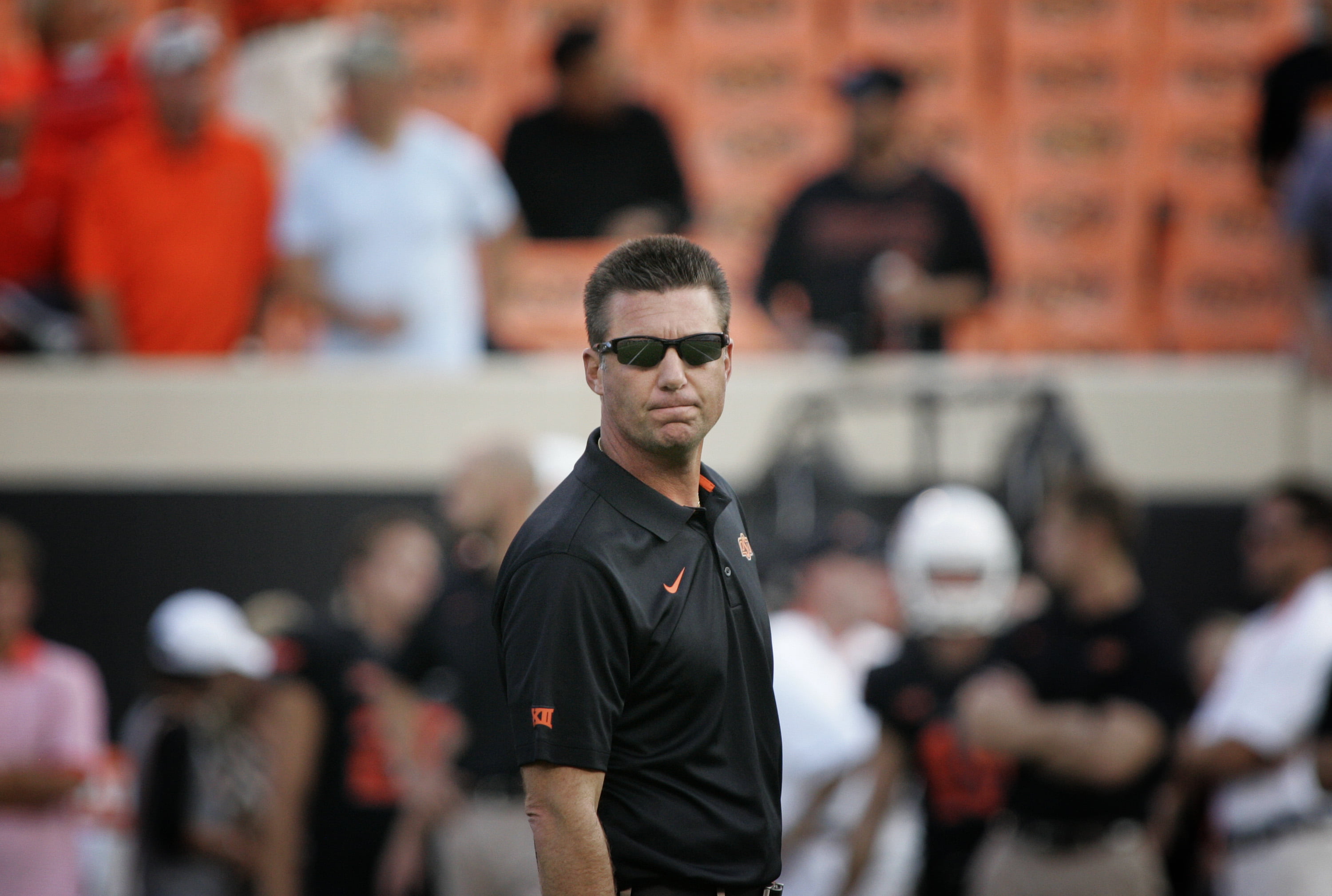 OSU has entered silly season early — would anyone be opposed to just canceling the Baylor and OU games and getting on with recruiting and this Gundy/Florida thing?

I wouldn’t. Especially because Saturday in Waco might make the 1916 Cumberland-Georgia Tech game look like a barnburner.

So instead of discussing what a real-life sports massacre looks like, let’s talk about Mike Gundy and the Florida Gators.

I’ve written over and over again that I don’t think it’s happening but lots of folks keep pumping the idea. Here are a few things I’ve thought in the last 24 hours:

“I would like to finish this contract and then coach another contract,” Gundy said. “I would probably like to do another six- or eight-year deal and then I would look and see where I am at.

“That would add up to 12 more years probably. I would probably do it pretty consistently until I am 60.”

That would be 20+ years at OSU or 10 at OSU and 12 more elsewhere. For some reason 20 seasons at OSU feels about right for Gundy.

• The breaking down of what Gundy was wearing to his Monday press conference. I just…you guys know I’m a uni guy but that is a step beyond where I’m prepared to go.

This is a guy who struggles to manage timeouts at the end of games and you think he’s clandestinely tossing daggers at Mike Holder and Boone Pickens based on his attire to a press conference?

I love Conspiracy Theory Guy but that’s a little much.

• This is interesting (only two have been with their teams longer than Stoops, by the way):

Here's a crazy stat: There are 128 FBS coaches. Only nine have been with their teams longer than Mike Gundy.

• Gundy’s buyout is $3 million. That’s not insane but it’s not nothing, either.

• I’m fascinated to see what happens in this poll. I was talking to my dad the other day about how under-appreciated Gundy is and he noted something interesting (and that I agree with):

In terms of who we (OSU) could reasonably get (and would stay) and the level of talent in a coach that we would want, the Gundy Venn Diagram is pretty much perfect. 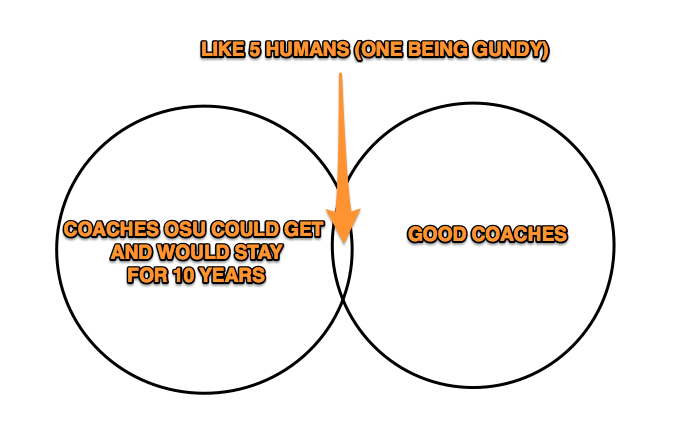 Now this has changed since Gundy was hired (because of Gundy?) but it still applies to some degree, I think.

• If you’re on the “he’s leaving” side and believe that Florida would want him to begin with, this point by Amilian is sobering:

“Typically when a big school goes after a good coach at a lower-tier school, that lower-tier program is doing much better at the time (i.e. Baylor) so he might not mess with it. How often is a 5-7 coach a popular candidate?”

You also have to believe that OSU isn’t close to being really good again. I’m probably on the optimistic side of things there.

They need three lineman and a better QB and all of a sudden you’re probably a 9-3 team next year. Easier said, I know.

• This was funny. But yeah, if Gundy hates his schedule right now. I mean……..

Gundy: "I'm taking the Florida job."
Holder: "You'll have to play Florida State out of conference every year."
Gundy: pic.twitter.com/dbQrEOM5jO

• Above all — and I know this is the most ambiguous and ridiculous of all reasons — I just don’t see Gundy in blue and orange on the Gainesville sideline next season. I can’t fathom it.

Like I said yesterday, this isn’t 2004 or 1994 where you have to be at Florida, Texas or Georgia to win conference titles.

The landscape is flat these days, or at least more flat than it was.

Sure, you can shoehorn Gundy’s best attributes (whatever they are?) into whatever job you want to shoehorn them into but at the end of the day I think his heart and his mind are forever tied to Stillwater.

Change is a difficult, difficult thing and even though we want to make mountains out of molehills (see: Pickens, Boone) the answer with the fewest variables (and assumptions) is almost always the correct one.

Now he just needs to go get himself an offensive coordinator.