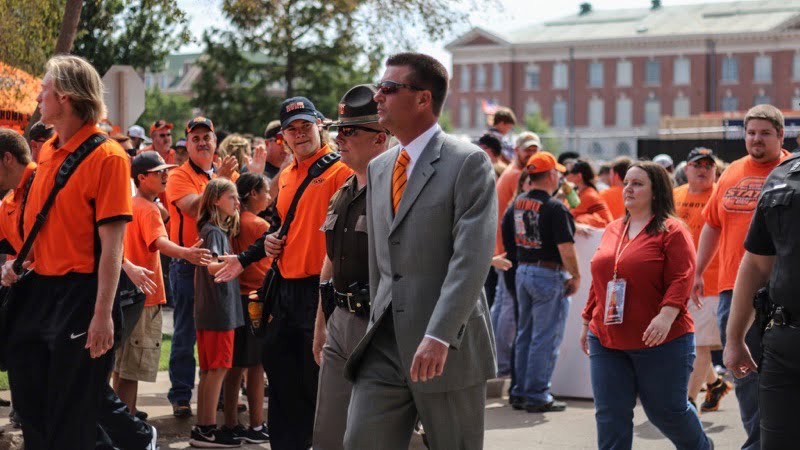 There’s a great quote from a 2001 story in Sports Illustrated about the plane crash that took the lives of 10 people on the way back to Stillwater. It comes from Eddie Sutton’s late wife Patsy.

“Eddie’s in denial,” said Patsy, his wife. “He’s had to be so strong for everyone else, he hasn’t been able to grieve.”

“You know, that was the toughest thing,” said Eddie 10 years later. “And I’ve had some tough experiences in my life. But when we got back and they called me and told me that plane had gone down, and everybody was gone. And then to have to call the parents and the wives of those ten – that was a tough assignment,” Sutton said.

“Life is precious. And one never knows. Anything can happen to you.”

Mike Gundy was transitioning from College Park, Maryland to Stillwater to be Les Miles’ cocky, headstrong offensive coordinator that year. Back when scoring 40 a game felt like running it up instead of a disappointment.

It’s been almost 15 years and now there’s Gundy sounding a lot like the person who basically held the school together for a few weeks in January 2001.

“It was a little more emotional than I would’ve liked even before the game with the team and afterward,” said Mike Gundy on Monday about the Homecoming tragedy.

“Eddie Sutton – Coach Sutton – told me one thing you can’t forget in coaching is to grab your kids and tell them you love them every day. Those situations make us forget about all the things that are irrelevant and how precious life is and it can be gone just like that.”

How good is that?

I mean, how good is that?

Gundy has become such an invaluable piece of the Oklahoma State puzzle that there’s not really a salary that’s too high for him to be paid? How do you put a price on cornerstones? How does an architect overvalue a foundation? It’s nearly impossible.

Carson was right when he said in our podcast on Tuesday that it matters when Oklahoma State alums return to coach the programs they once played in. I’m not sure it matters on a national scale at other institutions, but Eddie Sutton, Mike Gundy and Josh Holliday have proven why it’s paramount in Stillwater.

John Hoover was right when he said the following in his column for the Tulsa World on Tuesday.

On Saturday, for OSU fans desperate for answers that will never come, Gundy might have become this generation’s Eddie Sutton.

Hoover went on to share a great quote from the General himself, J.W. Walsh.

“Any organization — business, football team, it doesn’t matter — the leadership starts at the top. And from coach Gundy, it trickled down through the coaches to us as players. You could just feel it from him. When he found out about (the crash), he brought us all together as a team and he talked to us, and what he told us was awesome. He really kind of got our minds right and in a good state of mind to play the football game.”

But it was (and is) more than that. Money talks and in Stillwater, where everyone is pretty much no more than one step removed from the university, nobody makes more money than Gundy. That means he gets the loudest voice, like it or not. He’s embraced and genuinely relished the role.

“(10 years ago) I wouldn’t have had the composure and the ability to handle it as a coaching staff as well as we did – as I thought we did – with our players, the community, and the families.”

But this is why he’s become the most invaluable coach in any sport in OSU history. When you combine on-field excellence with off-the-field relevance, there’s no price tag on that. You almost cannot make the price too high without getting Saudi princes involved.

Remember when everyone wanted to fire Gundy this time last year?

The school paper called for his head before Bob Stoops gifted him a relaxing offseason. Now he’s won nine straight and, more importantly, stepped up to the podium twice in the last four days, looked the state of Oklahoma right in the eye and said, “come after me.”

But he didn’t say it in the maniacal way he spewed it back in 2007, but rather with resolve and maturity. He stepped up to the podium, looked around and said, “I’ll lead. I’ll carry the torch. I’ll be the guy when everybody desperately needs a guy.” He’s stared at tragedy and calmly pronounced, “this is who we are, this is who we’re going to be. You can’t erase 100+ years of joyful history with one mindless act.”

“That’s something that’s very important to us and to me, to make a point that it is a great time of the year. It’s a great weekend and a great day, and there’s a tremendous amount of pride and effort that goes into our homecoming, and that’s why it has been established the way that it is. I don’t want anything to be taken away from that.”

This isn’t even about football. This is about Betas and Pi Phis and agriculture professors and the people who work part-time at Red Rock Bakery. This is about the whole f****** community.

Mike Gundy is not infallible, of course, don’t hear that in what I’m saying. But he’s done an unbelievable job of reminding everyone that being a college football coach in 2015 is about a lot more than calling fake punts and managing timeouts. Gundy has led at a time when the OSU community and and entire town needed a leader.

Those situations make us forget about all the things that go on that are irrelevant and how precious life is and (how) it can be gone just like that.

Sounds like somebody else who once strapped a town on his back and carried it a few more miles way back at the turn of this century.

Mike Gundy might have pronounced himself a man in 2007, but everybody knows age doesn’t make a male a man. He’s proven he knows exactly what it means now.

The head ball coach is all grown up.