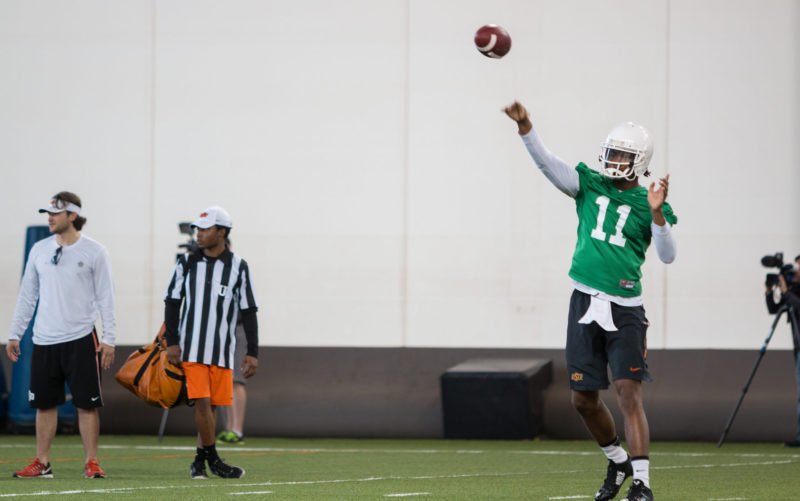 On Monday, Mike Gundy held his first press conference of the year as his team opened spring camp. The topics spanned from Central Michigan to pulling out his wallet to make wagers about Dana Holgorsen (which … who hasn’t?)

One of his more telling comments gave us some insight into what he has planned for the Cowboy offense and how he sees the backup quarterback competition shaking out.

“We would like to come up with a package like we had with J.W. (Walsh) for one of them,” said Gundy. “I would like to do that forever if we had the option, but we didn’t have that person last year.”

The need for a more effective option in the red zone is real. Last season, the Cowboys averaged 4.52 points per red-zone attempt — third-worst over the last nine years — and down from 4.75 in 2015 (when they had J.W. Walsh). Whether that is personnel or execution, it’s hard to argue with the numbers.

And it appears Gundy already has his eye set on a couple of candidates.

“I think we have a couple of guys that meet that criteria and that could be successful in that style of play,” Gundy said. “What that will do is give them some added reps in practice and games and potentially help us solidify who will be the No. 2 guy. (Keondre) Wudtee obviously has had a great offseason and (John) Kolar has had a great offseason.”

Kolar is a mobile option with the ball in his hands and has packed on some muscle since arriving in Stillwater two years ago.

“John is a lot different than what people think,” said Gundy. “He came in at about 130 pounds, jokingly. He looked like he was about 130 pounds, but his body has developed and he looks like he may be able to ﬁt that role.”

“We’re looking to establish a backup quarterback and maybe somebody that can be a short-yardage guy for us.”

Presumably Wudtee or Kolar would fill the short-yardage role. If the two roles are different, I think that means we can semi-confidently pencil in Taylor Cornelius as the true No. 2 to back up Mason Rudolph, at least pending some developments this spring. I don’t think there’s any doubt Mike Gundy wants to keep Jelani Woods’ redshirt intact, given the opportunity.

Just because Wudtee is a candidate for the J.W. role, doesn’t mean he can’t spin it which could be an intriguing twist on the red-zone QB thing.

Gundy was asked about his true freshman QB and where he expects him to be physically — after a presumed redshirt year.

He is big, especially for a quarterback. The tallest NFL quarterback in history was Dan McGwire at 6-foot-8 and he was 240 pounds when he was drafted by the Seattle Seahawks in 1991. Woods is 6’7 and already at 253 according to his head coach.

Gundy lauded Woods for making it through the offseason running program held by Rob Glass, even admitting he would have quit had he been put through such strenuous training.

Woods may be the quarterback of the future at OSU, but this spring is all about getting reps for all of the QBs on the roster.

“There is never enough reps to go around for the quarterback position though,” Gundy said “because unlike those other positions there’s only one guy out there.”

The good news for Gundy is that the talent at the most important position on the field may be as deep as he’s ever had at OSU. Let’s just hope they all stick around.

“What’s encouraging about Wudtee, Kolar and even on a short note with Jelani (Woods) is that they’re extremely competitive,” said Gundy.

Even when it comes to being more vocal.