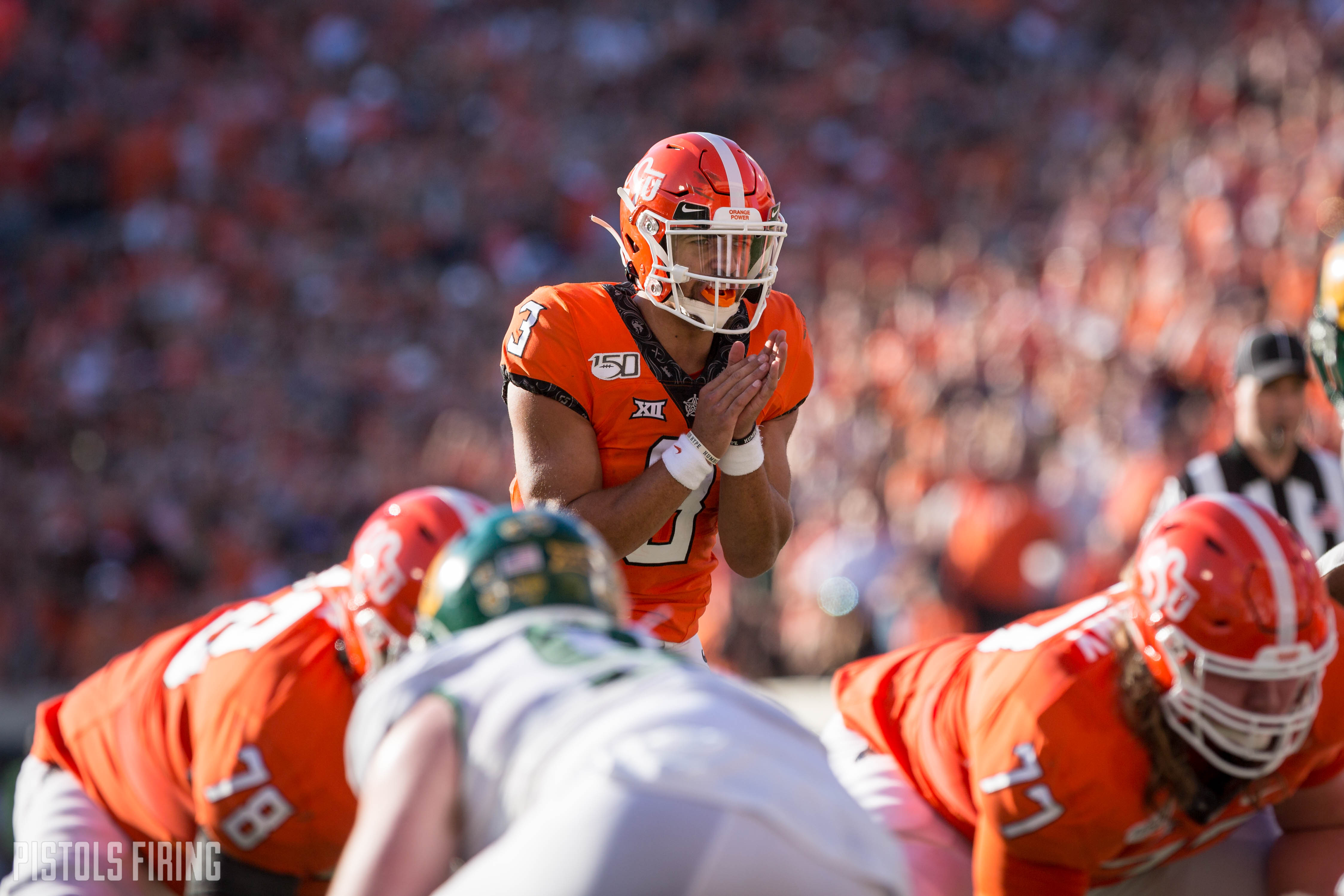 After another disappointing outing and eight combined turnovers from Spencer Sanders over the last two games (both losses), Mike Gundy says he’s not considered a change at quarterback.

“That’s not something we’ve thought about,” Gundy said when asked that question after the game.

If your first season as a freshman starting QB is to be a roller coaster, Sanders must be wondering when that next uphill climb will come.

In losses to Texas Tech and Baylor, Sanders completed just 57.9 percent of his passes and threw more interceptions (four) than touchdowns (three). Worst of all, at least to his head coach, Sanders has lost two fumbles in each game.

Sanders ended the second quarter with a fade route that should have given Jordan McCray a good shot at a touchdown that would have given OSU a 20-10 lead going into the half. Instead it was under-thrown and intercepted.

“The first one he threw was perfect,” referring to Sanders’ lone touchdown to Jordan McCray in the first quarter. “He underthrew that one about 5 yards.”

“… Spencer would like to have that throw back right before half, but sometimes that’s going to happen. As he matures, that will get better.”

The maligned fumble issues have become an unnerving trend. That’s seven total fumbles and five lost in seven games for Sanders. The worst of all came on Saturday when the Cowboys, who had traded TDs with the visiting Bears early in the fourth quarter, found themselves down just four with nine minutes remaining.

On the third play of the drive, Sanders was strip-sacked at his own 25-yard line allowing Baylor to scoop and score from 20 yards out. The cardinal sin of turning it over deep in your own territory was punished with a nail in the coffin.

The second fumble came two possessions later, but the game was all but decided after the Cowboys defense gave a 73-yard touchdown on the only play of that drive, making the score 45-27 with just over five minutes remaining.

“The one in the pocket I think he caused himself. I thought on the replay it hit his own leg,” said Gundy of the second fumble.

“… In the end, he’s just trying to make a play. The game’s basically over.”

Gundy said that, for the most part, he thought Sanders did a good job of distributing the ball better than in previous games with 10 different Cowboys making a catch and with guys like Jelani Woods and Jordan McCray seeing an increased role.

“I thought for three quarters, other than the one underthrow that Spencer had before half, he was pretty sound in what he was doing, his thought process, distributing the ball,” said Gundy. “Then he turned it over and they picked up and ran it in for a touchdown which made it look bad.”

That second fumble would be Sanders’ last play of the game. Dru Brown made his first appearance since McNeese in Week 2 but, according to Gundy, that was due to Sanders taking a hit and the game being basically over.

“We put him in at the end,” Gundy said of Brown. “Spencer kinda got his head dinged. But no (they did not consider a QB change), because up until the end… when he turned it over it was pretty late. Prior to that he had played pretty good. He’d made some plays, threw the ball pretty good, was operating. We were moving the ball, so not at that point (did he consider making a change).”

Gundy has told us time and time again that a quarterback doesn’t really figure it out until he’s another half dozen games down the track.

Despite his flashes of star potential, Sanders’ decision making and ball insecurity is a concern. But it appears, at least at this point, that his head coach is along for the ride.

“He was pretty good for quite a while and then he got back to a little bit of freelancing at the end of the game,” said Gundy. “He’s gotta stay in the system.”