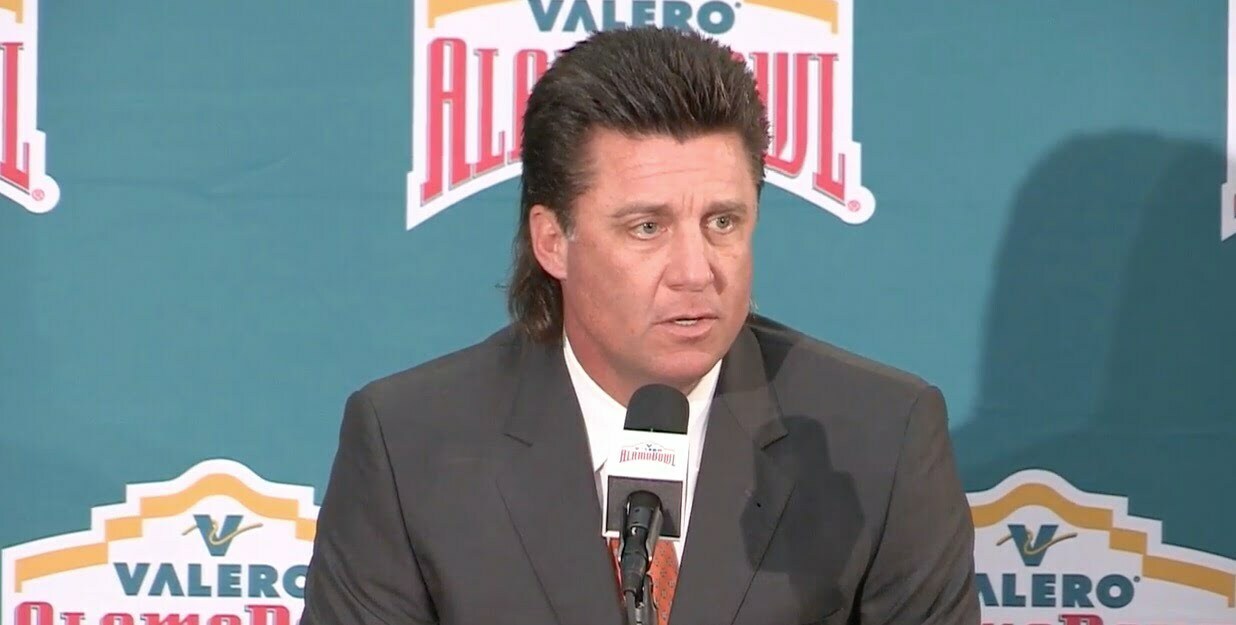 Guys, Mike Gundy does not care about the College Football Playoff. Like, at all. We already knew this of course, but he re-affirmed it on Wednesday ahead of the 2016 Alamo Bowl.

“We’re looking forward to it,” said Gundy. “As I said, very excited about playing Colorado, a team that’s had a tremendous season, plays hard, very, very well-coached. I feel like this is the best bowl matchup of the year.”

The best bowl matchup of the year!

“Terrific matchup with quarterbacks that have had great success, skill players with success at the wideout spot. Colorado’s defense, could very well be the best defense we played. The secondary, I know they’ve got six guys on that side of the ball being evaluated by the NFL. It’s a great matchup. A lot of respect for coach, to be able to win the awards that he’s won this year. I’m sure he feels like those are staff awards. But he’s done a tremendous job.

“So we’re playing a great football team. It’s a challenge. We’re responsible as coaches to get our players prepared during that time to play the very best that they can. Once it’s kicked off, they have to go out and have fun. In a sense, they’re warriors, they’re gladiators, the guys that play this game. But the game has to be fun for them. That’s the challenge.”

Here are a few other notes from Gundy’s Wednesday presser.

“If I would have known it would have been such a distraction, I would have cut my hair in August. I think I’m going to make that decision based on my 12-year-old’s grades. If he improves in his math classes, then I’ll cut it, otherwise I may antagonize him for another month or two. I have had one request to keep it until Media Day next August, but I don’t know if I can go that far. It’s been a lot of fun with the players.”

On Rudolph and Washington returning

“Hopefully they can stay healthy. They’ve been great leaders for our team. Guys like that only come through every so often. All of you out there know, if you follow the game closely, little league, high school, all levels of college ball, the NFL, if your quarterback is playing pretty good, you have a guy that is a tough guy that will take a chance, you got a chance to have a good team. That’s really where they’re at. So we were very excited about them making the decision to come back and be a part of our team next year.”

“It doesn’t surprise me. He’s got a long history. Dad is one of the most successful high school coaches in Texas football. He’s really a coach on the field. You want your son to grow up and be like him. He’s going to do everything right all the time. He doesn’t see obstacles or roadblocks, he pushes through. He’ll spend some time there. I’m going to guess he’ll move on. Before long he’ll be at a pretty high level. I would say someday, some point, probably back at Oklahoma State.”

“Sterns is a throwback player. He kind of goes back to the days of the ’80s of guys that will strike you and enjoy the contact. Goes against human nature for two people to want to run into each other. There’s some players that are somewhat genetically unbalanced and they’re willing to do that. Sterns has been one of those guys up to this point.”