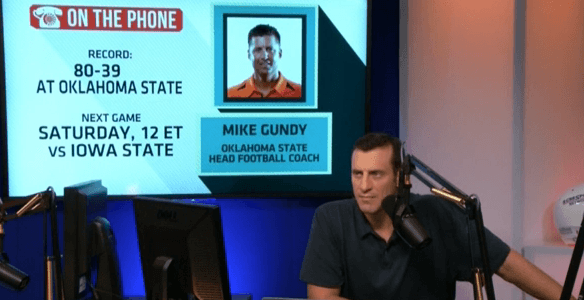 Mike Gundy talked to Doug Gottlieb about dancing in the locker room and how coach is doing it now.

“They’re not as good, though, when you watch them. I said ‘listen, I’m the best at it and I’m the guy who started it. Some of these other guys who do it they’re just not as good as I am at it, they really struggle with it.”

Doug asked him if he’s showing his stuff off at the Tumbleweed.

“I served so much time at the Tumbleweed that I haven’t had the guts to go back out there.”

I don’t even know what to say about any of this. When he said “I’m the best at it” I lost it. I spewed tea onto my desk.

Also he talks math and science in the same answer about why his starters don’t play on special teams…which is always scary. Even though it’s well-documented that I love what Gundy is doing.

“The math of it, Doug….we’re real into the science part of saving our players’ legs and trying to keep them fresh.”

Basketball references, Tumbleweed thoughts, being jealous of Kingbury, “ack-your-it” talk, referencing his school in the third person, this interview really had it all. Two of my favorite talkers, too.