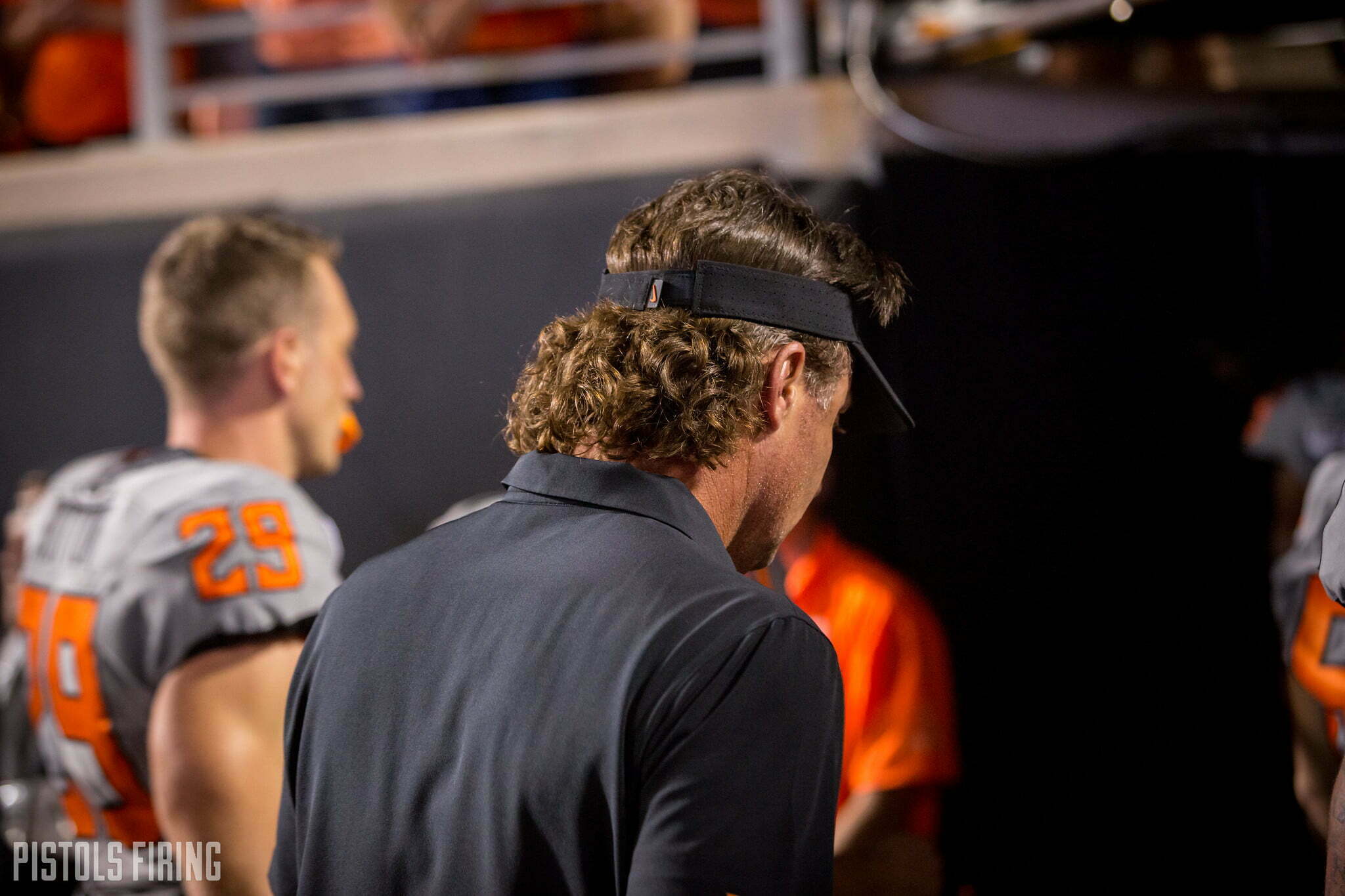 Two thoughts. 1. Mike Gundy made a misstep last week (you don’t have to take it from me anymore). 2. Mike Gundy is (and likely always will be) the best head football coach in OSU history. Both can be (and are) true.

These truths are also independent of one another. One does not necessarily intertwine with the other. Some of the talk nationally over the last week is that Gundy should be fired for his comments. What? Is that real? Because he wasn’t prepared to deliver the message that needed to be delivered in a conference call at the beginning of April?

Nobody has been more critical of that than I have … but fired? Come on.

I don’t think (and I don’t think anyone locally who has covered or followed this stuff thinks) that Gundy is a bad dude. I don’t think he only cares about money or that he doesn’t care about his players or his school. When this expands to people who haven’t followed along closely for the last decade, that’s an easy leap to make. But it’s simply not true.

What is true is what one player’s parent told the Oklahoman last week. That Gundy would not choose money, the economy or college football at the expense of jeopardizing his players’ health. “If he could make the decision,” this parent said. That quote right there is more or less my entire point.

Gundy can’t make the decisions he purported to have authority over. He knows this, everybody knows this. And yet he came out swinging regardless. Not only was he not on the same page as his employer, I’m not sure they were reading from the same playbook.

Gundy has stacked up these misdirections over the years in his press conferences and interviews. Sometimes they come off as cute and endearing, sometimes they make him (and OSU) look rather foolish. Regardless, I can’t imagine the folks in charge — the ones who convey to him what the decisions actually are — enjoy dealing with it.

But this is where things could turn.

Gundy, when he’s thriving, is so good. I always go back to his press conference after Bedlam 2017. The Baker-Rudolph II (2.5, whatever) game. One of the great nights in BPS history. I sat in that room and listened to Gundy talk about the past and the future. What OSU has been and what it could be. He slayed. He destroyed. And it was powerful. It made me believe in things I don’t normally believe in. It was the most galvanizing thing I’ve ever seen him do. If I was a booster who had a ton of money (and had consumed one or more bourbons during the game), I would have written him a check for whatever amount of money he wanted.

And yet, the picture that is sometimes painted in Stillwater based on the people I talk to is one in which the head man is often disagreeable and difficult to reason or deal with. On one hand, this makes sense. If I’d had the success he’s had, I’d probably be disagreeable, too. This is how power works. But in a sport in which everyone in the building needs to be pulling on the same rope in the same direction to make the whole thing flow, it sometimes seems as if Gundy is pulling in the other direction. Why, after all these years, can Gundy and his leadership not align before discussing something so important publicly?

Listen, Gundy will always be the standard by which all OSU head coaches are measured. He’s closing in on 150 wins (currently at 129) over the course of 15 years. How many of OSU’s next 10 football coaches will even last 150 games? He is the undisputed best coach in school history. It’s not even close. Nothing he says about snowflakes or Twitter or COVID-19 will ever change that. When we talk about his career 20 years from now, the lede will be that he steered a golden era of OSU football (and possibly athletics) for the entirety of his career at Oklahoma State.

However, I do hope this latest misstep is in some small way a mini red flag to him. I said this last week, but one source noted to me that for the first decade of his tenure, Gundy was awesome to work with. The last five years have seemingly been bumpier, both inside and outside the program. I hope it’s a mini red flag that he is not a lone wolf and that working together with his administration and his university (again, both of which released statements following his call one week ago) is far more important than maybe he thinks.

This isn’t about coronavirus. That will pass. The memory of what he said will fade. Nothing will happen. It’s about everybody pulling on the same rope in the same direction. Maybe this situation is emblematic of how everything stands in OSU football world when it comes to Gundy, and it didn’t exactly paint the prettiest picture.

Last week, he said he’s been sitting at home watching and studying the news. That’s fine — that’s what we’re all doing — but also maybe that time needs to be spent trying to drag his 2021 recruiting class (which currently consists of one player) out of the Big 12 cellar? Maybe that’s where the lion’s share of his time has gone — to recruiting for the future within the limits of what the NCAA has deemed permissible — but it kind of seemed as if he’d been doing more research on the OANN than on a running back to fill Chuba’s spot next year.

A final thought on this. Gundy’s secret talent has always been that he’s built a well-oiled organization that doesn’t need him to run (as he’s noted over the years). This is nearly impossible in any industry, much less one with as many moving parts as college football. He doesn’t get nearly enough credit for it.

Because this talent has led to a lot of wins and a lot of Big 12 title races and a lot of bowl games, Gundy’s face deserves to be on (or at the very least in the conversation to be on) a Mt. Rushmore of OSU coaching and administration figures historically. Iba, Eddie, Holder, Gundy, Pickens, Smith, Gallagher, Ward. You can choose any four and not be incorrect.

The only way to do this is to build and maintain an elite culture within your organization. Full stop. You can’t do it any other way. But my fear is that now that he has built a machine that churns wins and money and has been paid handsomely (and rightly) for all of it, that he is no longer quite as interested in pulling the rope as he used to be. This is natural in a lot of ways, and again, some of the folks I’ve talked to have insinuated as much.

With fear there is always hope though. They go hand in hand. And this specific hope is a good one. That the fallout from a dumb comment about a virus that we’re all sick of dealing with stirs something in both Gundy and the large organization he works with and for. That when all of this is over and things are back to normal [Gundy hand air quotes], the union between Oklahoma State football and Mike Gundy — the two most powerful entities in Stillwater — is more unified, more efficient and more successful than it has ever been.