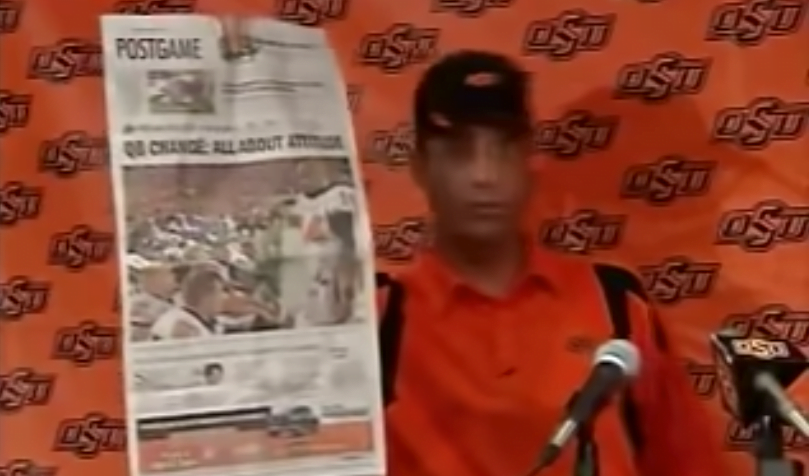 Wednesday is the anniversary of his epic “I’m a man, I’m 40!” postgame rant in which he defended quarterback Bobby Reid.

Gundy said that “three-fourths” of the article written, which he was upset about, was “inaccurate.” Asked about what was inaccurate about the story, he did not comment before going on the offensive.

“Here’s all that kid did: Go to class, he’s respectful to the media, he’s respectful to the public, and he’s a good kid,” Gundy said. “He’s not a professional athlete and he doesn’t deserve to be kicked when he’s down. If you want to go after one of my athletes, you go after one that doesn’t do the right things. You don’t downgrade him because he does everything right and may not play as well on Saturday. … That’s why I don’t read the newspaper. Because it’s garbage. And the editor that let it out is garbage.”

Gundy later said the rant positively affected the team, and the parents of recruits saw his coming to the defense of Reid as positive as well.

“It’s really helped our team,” Gundy said to Fox Sports’ Bruce Feldman (via SB Nation). “It’s funny. In recruiting, it’s faded out over the last three or four years. Two, three, four years afterward, I would go into homes to recruit — I remember being on the East Coast, and one of the players’ grandmothers came in and brought that up and talked about it for a couple minutes, then got up and left. She just wanted to talk about our willingness to support our players.

“I don’t hear about it much anymore. Sometimes, I get it from my kids. I’ve got a 13-year-old that can mimic it right to the tee. He could probably go on Saturday Night Live and do it. It was a very unique time in my career, but I certainly think it helped our football team.”