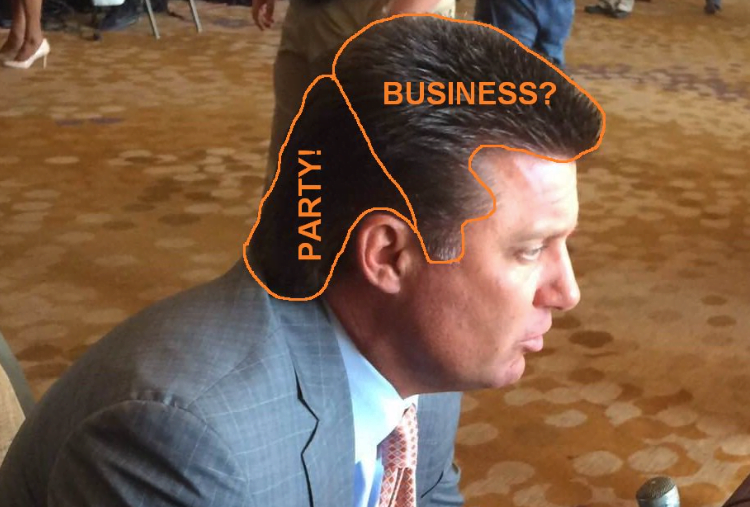 Mike Gundy is getting a lot of attention at Big 12 media days. And not necessarily for anything he’s said, but rather what he’s sporting — a pretty beautiful mullet that would have Joe Dirt giving him a tip of the hair. Gundy told the Oklahoman “it’s not a real mullet. A real mullet has to be at least shoulder length and you’ve got to have some curls in it.”

So we have that cleared up.

Now here’s what the media contingent and OSU faithful are saying about the head ball coaches hair style:

It needs to stay. https://t.co/eibqu2gom9

To be fair, this has nothing on Gundy’s college mullet. pic.twitter.com/co7F2ZeJJt

Just witnessed the Gundy Mullet. It was magical and terrifying all at the same time. #Big12MediaDays pic.twitter.com/bbE3AExOe5

Mike Gundy: "It's not a real mullet. It has to be permed and to your shoulders, right? #okstate pic.twitter.com/KtvpqxYz9y

We have developed a handy guide to Mike Gundy's haircut at #Big12MediaDays. This should explain a lot. pic.twitter.com/wljGEh1qGS

I’m so tempted to raise my hand and ask Mike Gundy, re: his hair, if he lost a bet.

Mike Gundy's mullet is a 10/10 on the redneck scale. It's truly mesmerizing.

UPDATE: This is glorious. #okstate pic.twitter.com/w2y4Lwchqb