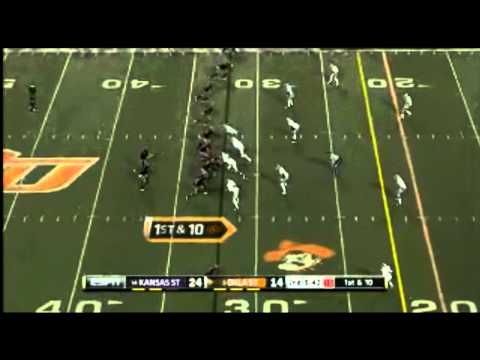 Apologies for the poor quality on this video (I believe the kids these days call less-than-perfect internet connections “first world problems”).

Nonetheless, I wrote about this during the game but I wanted to give you video evidence.

This is OSU’s first drive after Weeden threw the pick six to go down 24-14 and a giddy (and heavily-wagered) Brent Musburger screamed, “NUMBER THREE IS IN TROUBLE!!” as ABC went to break.

This is what I like to call a “screw every defense in the Big 12, I have the best QB in the country” drive from Monken.

That the drive stalled out before Sharp banged one home to pull within a touchdown isn’t the point. The point is that Monken is going to keep going to the deepest well and biggest arm in the nation until it won’t go anymore.

And that end is nowhere in sight.