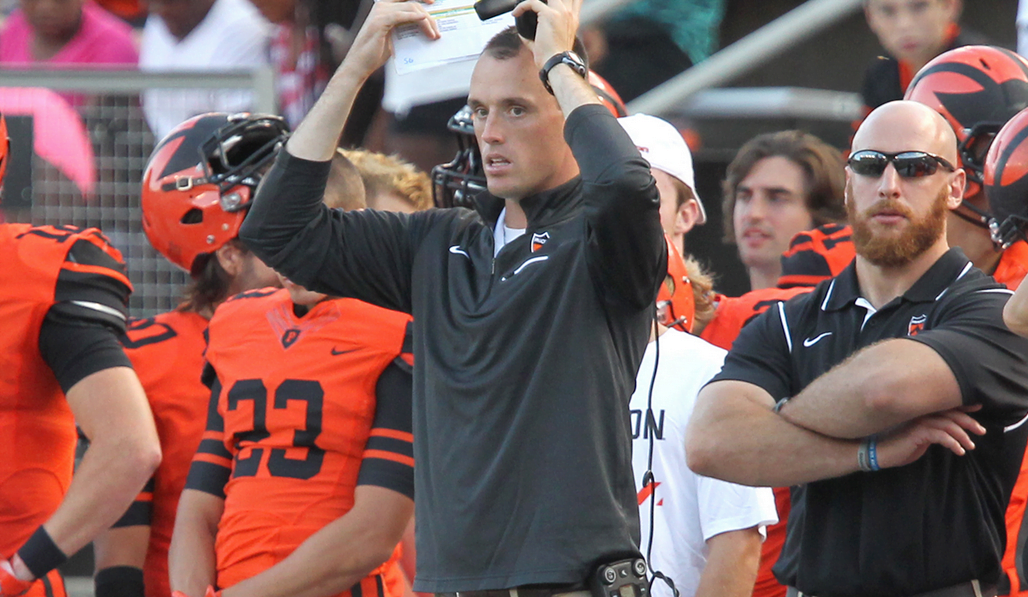 The reactions to Mike Gundy taking a gamble on Princeton offensive coordinator Sean Gleeson to run Oklahoma State’s high octane offense in Stillwater was a bit of a mixed bag. SB Nation’s Bill Connelly seemed willing and able to take out a second mortgage on his home that it would work, a former receiver of his speaks highly of him and how he engineers an offense, and game tape from Princeton shows he’s nothing if not loose with his play calls.

And by loose, I mean imaginative. In a good way.

The questions around Gleeson center around how he’ll adapt jumping from Ivy League to the Big 12, whether or not he’s ready, at age 33 (or 34, or 35, or 36), to take on the stresses of recruiting, game-planning and calling plays at the highest level, and if he can translate a constant green-light at the FCS level to working hand-in-hand with Gundy.

For now, though, the immediate reaction is that it has a chance of working very well.

Here’s Connelly, who joined the PFB pod this week with Kyle and Carson, on the hire and what Gleeson brings.

As illustrated in this set of Twitter videos from Dan Casey, Princeton leverages your assumptions against you. They know how the typical spread offense acts, they operate the basics well, and then they devastate you by going against tendency.

They can get you reacting to jet sweep motion, then hit you with a pass over the top. [SB Nation]

Princeton and Gleeson would show one look that would sell a defense, then use that look to run another play. Its offensive deception — and it worked time and again, with jet sweeps, pop passes, you name it. The Tigers used tempo, went against tendencies, and weren’t afraid to switch things up, like when they used three (!) quarterbacks on the field at the same time.

When are some of these bigger schools going to start poaching coordinators from the Ivy League?

Turn on the film, some of the most creative offensive football out there! pic.twitter.com/N4mPtTJ3mO

As for what “style” Gleeson brings, it’s like the air raid made a baby with RPO schemes and used Kliff Kingsbury as a doula.

Chad Kanoff and John Lovett, two elite Princeton quarterbacks in 2017 and 2018, have put together some stellar passing tape for Sean Gleeson. From watching Princeton film I’ve seen some Air Raid concepts in their passing game. Princeton likes the shallow crossing routes as well as stick routes. Of course play-action passing will be a huge part of their game as they love to run the football as much as sling it around. [State of the U]

The two quarterbacks Gleeson coached were vastly different in terms of skill set and style, and Princeton dominated on offense both seasons.

Consider the book still out on whether a Gundy-Gleeson marriage will work, for now. Aside from the diehard football gurus like Connelly and Dan Casey, there’s not yet been a judgement one way or another whether this is a seamless fit. But those who have weighed in and seen Princeton’s and OSU’s styles and schemes believe it will work.

Gleeson brings a dynamic offense with misdirection, dua tight ends, and creative ways to get playmakers the ball in space. Reserve your judgement for now, until you see how Princeton’s success under him translates to the Big 12. But it’s about as risky a hire you’d expect from Gundy to pluck from the Ivy, and it seems the rewards are undeniably worth it.