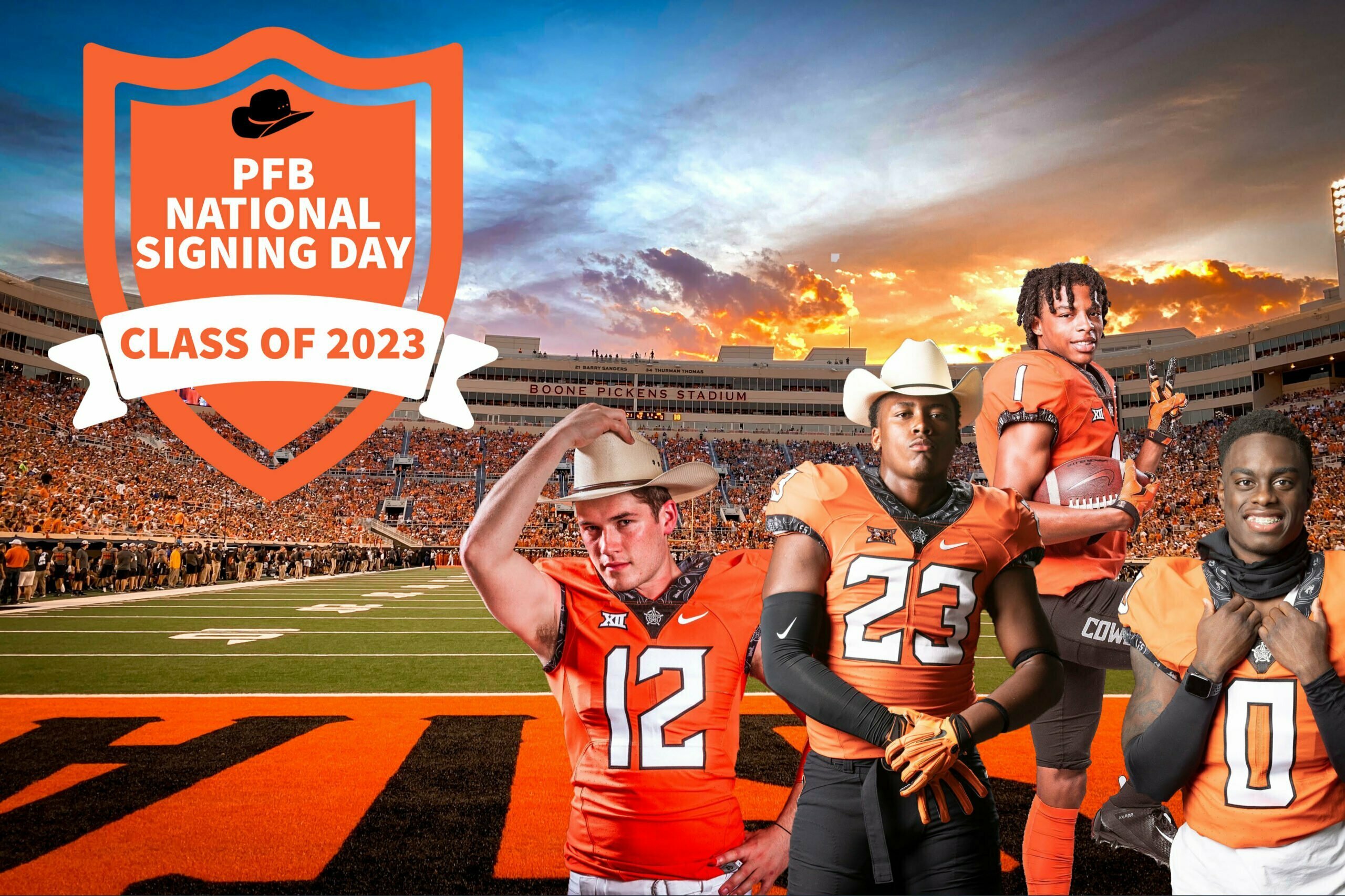 STILLWATER — After a few weeks of the transfer portal dominating the recruiting world, some good, old-fashioned high school crootin’ took center stage Wednesday on the first day of the early signing period. Oklahoma State was adequately prepared to dominate the first day of action, too, as every commit expected to sign did indeed sign and every transfer commit expected to sign did indeed sign.

OSU even added a commitment early with defensive lineman Iman Oates announcing his signing early Wednesday amid the chaos.

As letters of intent rolled in throughout the morning we were up and at ’em tracking all the action as signees formally declared their allegiance to OSU. Below, we’ve recapped all the action with tidbits to know on each incoming signee, their respective position and a running list of everyone on the way. (So far, of course.)

The Cowboys’ next Aussie punter, Hudson Kaak committed to Oklahoma State in August out of the ever-popular ProKick Australia. Kaak played Aussie rules football for the Murray Bushrangers in the NAB League, an under-18 team in Wangaratta, Australia before electing to go the American college route. It’s already been National Signing Day in Australia for a while Kaak announced his commitment yesterday afternoon in Stillwater time, with OSU making it official this morning.

Oklahoma State made a late push for Tywon Wray, who committed to the Cowboys just two days before the signing period opened. Wray played all along the defensive backfield for Campbell High School (Georgia) in his senior season. Wray’s big frame shows a lot of potential even if his recruiting ranking won’t raise a ton of eyebrows.

The earliest commitment in Oklahoma State’s 2023 class, Jaedon Foreman pledged to the Pokes on Nov. 19, 2021 and hasn’t looked back since. Foreman led Del City to a 9-3 record this year, recording 45 tackles and 6.5 sacks, according to MaxPreps. He also played tight end for the Eagles, catching six passes for 92 yards and a touchdown. Foreman is the No. 11 player in the state of Oklahoma in the 2023 cycle, according to the 247Sports Composite rankings.

In his final two seasons of high school football, Poasa Utu had 195 tackles, 74 tackles for loss and 25 sacks. Those are ridiculous numbers and that’s not even mentioning the fact that he had three interceptions, five pass breakups, four fumble recoveries a forced fumble and two blocked punts. He has played as a linebacker and as a defensive end in his high school career, but he is expected to play linebacker in Stillwater.

Ricky Lolohea is big enough to plug up the middle, but he is agile enough to the extent that he was used more as a three-down defensive end in his senior season than a traditional nose guard. Hailing from the same high school that produced Ollie Gordon, Lolohea got his first offer from Oklahoma State last January. After building his offer list during the spring, he committed to the Cowboys in May.

The No. 26 junior college product in the class, Lardarius Webb Jr. brings an NFL pedigree to Stillwater. His father, Lardarius Webb Sr., played nine seasons with the Baltimore Ravens, winning a Super Bowl. The apple doesn’t fall too far from the tree. For Jones College (Mississippi) this season, Webb Jr. tallied six interceptions (!!) to go with six pass breakups, 28 tackles and four tackles for loss. On Tuesday, Webb was named a NJCAA First Team All-American. If he can hit the ground running in Stillwater, he could contribute early as the Cowboys look to replace Jabbar Muhammad and Thomas Harper from their secondary.

Oklahoma State’s highest-rated commit entering Signing Day, Flores tore it up in the Cornhusker State this season. He led his Gretna Dragons to the state title game and threw for 3,117 yards and 31 touchdowns to only seven interceptions. He also ran for 10 more scores. Before his senior year, Flores made it to the finals at Elite 11, a camp where the best quarterbacks in the country get together and compete.

Once the Cowboys committed to Gage Stanaland, it didn’t take him long to commit to the Cowboys. One of the later additions to OSU’s class, Stanaland announced his OSU offer at 1:31 p.m. Nov. 16. He announced his commitment to OSU at 2:27 p.m. Nov. 16. Stanaland was a bulldozer at the Texas 3A level. Behind Stanaland, Jim Ned High School rushers averaged 252.4 yards a game in 2022. Some of these blocks look like embellished blocks from movies.

Oklahoma State was able to hold off a surging Texas A&M as Isaiah Kema committed to OSU just two days before National Signing Day. A few reports have indicated that Kema will go on a two-year religious mission, so it’s not totally certain when he’ll end up on OSU’s campus, but Kema enters Signing Day as the highest-rated offensive line commit of the Cowboys’ high school class. He is the No. 747 player in the class and No. 121 player from the Lone Star State.

The center for Stillwater High School’s undefeated state championship-winning squad, JaKobe Sanders only needed one offer to pick where he wanted to go to school. The hometown hero becomes the second scholarship Pioneer the Cowboys have moved across town in as many classes after taking linebacker Gabe Brown last year.

One of the earliest commits in OSU’s 2023 class, Kam Franklin committed to the Cowboys back in November of 2021. Franklin led the Oak Grove Tigers to a state championship in 2022, and he recorded 12 tackles, a fumble recovery and an interception in the state title game — earning MVP honors in the process. On the season, Franklin had 112 tackles, 43 tackles for loss (!!), five forced fumbles, four fumble recoveries and a pair of interceptions.

Ike Esonwune was committed to Tulsa for about four month before flipping to Oklahoma State less than a week before Signing Day. In his senior season at Manor High School (east of Austin), Esonwune had 67 tackles, 11 tackles for loss, two sacks, two interceptions, four pass breakups, a forced fumble, a fumble recovery and a blocked punt.

A legacy at Oklahoma State, Dylan Smith signs to come to Stillwater just two years after his brother — OSU cornerback Cam Smith. Dylan Smith had 52 tackles and four interceptions for Braswell High School this season. Playing both sides of the ball, Smith also had 16 catches for 248 yards and four scores.

An athlete in every sense of the word, Heard played quarterback in his senior season at Furr High School (east of Houston). He led Furr to an 8-3 record this season. In the regular season, Heard threw for 760 yards and 11 touchdowns, but he did most of his work with his feet, running for 1,219 yards and another 26 scores. Oh, and on the other side of the ball, Heard had five interceptions playing as a defensive back.

A late addition to the Cowboys’ 2023 class, RJ Lester was committed to Kansas State for about five months before decommitting on Dec. 5 and committing to OSU five days later. Lester was a ballhawk for Northside High this past season. It seemed no matter where he lined up — from corner to in the box — the ball found its way to him (or vice versa).

The first surprise of the morning, Iman Oates committed and signed with the Pokes. Hailing from Northeastern Oklahoma A&M, Oates is yet unranked by 247Sports. He holds 20 offers, but the Cowboys are the first Power Five school to come calling when they offered in late November. With NEO this season, Oates had 40 tackles, nine tackles for loss and three sacks. With the loss of Brendon Evers, a man of Oates’ size and experience could help fill the gaps in the Cowboys’ interior front.

A mauler from the state the Cowboys are headed to for a second straight bowl game, Jack Endean played his high school ball at Tanque Verde. The Hawks had an up-and-down season in 2022, losing four straight, winning five straight, then losing two more, but Endean’s mean streak is undeniable. He plays through the whistle and is on constant lookout for his next victim.