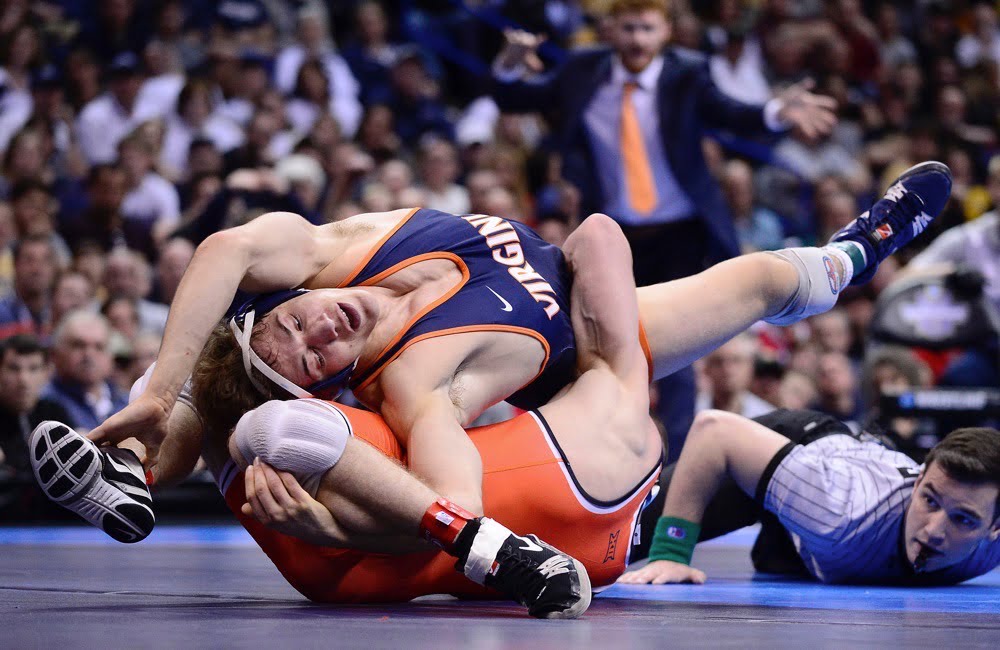 Unfortunately that is exactly what happened. Oklahoma State finished third in the team race, and had 8 wrestlers finish in the top 8 and achieve All-American status.

Nick Piccininni had an incredible tournament. With a win by fall in his first match and another gritty decision over Seth Rodriguez of NDSU in his second match, Picc went up against the hated Thomas Gilman of Iowa.

Picc gave Gilman a great match until the third period, when Picc went for it all and was caught on his back resulting in a pin by Gilman. Picc then showed grit in the consilation bracket by defeating Edinboro’s Seth Russell, who had beaten Picc earlier in the season, and picking up a forfeit win to get to the third place match where he would again face Thomas Gilman of Iowa.

The third time was not the charm for Picc, but he finished in fourth in a deep weight class his freshman year.

Kaid Brock has to be a bit disappointed with his performance after falling to Seth Gross in the semi-finals, where he lost a 3-12 major decision, and in the consolation semi-finals to Micic of Michigan. Brock did bounce back to win the 5th place match. Being an All-American in your freshman season is a big accomplishment.

Dean Heil is a true champion. More on his run later.

Anthony Collica was a disappointment at the NCAA tournament this year. I am not going to speculate on what happened, but I am going to thank this senior for his time at OSU. Four Big 12 championships is a big accomplishment on it’s own, and Collica certainly made his mark on OSU’s history.

Joe Smith had a rough season. The sophomore was unhealthy this year with bursitis in his knee, which made it difficult for him to stay in weight and be mobile enough to compete on a high level … Smith finished in fourth place at the NCAA tournament.

When you hear somebody speak negatively of Joe Smith, remind them of that. While I think that a redshirt year for Joe would be the best thing for the 2017-2018 season, I am excited to see what a fully healthy Joe can do in this field. Jason Nolf at Penn State still has two years of eligibility, so this will also allow Joe to compete without that monster in the room for at least his senior season.

Chandler Rogers was awesome in the NCAA tournament. Pinning his first two opponents before running into two-time champion Isaiah Martinez of Illinois was impressive on its own. Rogers then gave IMar a close match, won his match in blood round, and finished up with a win over Mizzou’s Daniel Lewis to place 5th. Chandler is a pinner, and he will be very valuable to this team moving forward.

Kyle Crutchmer also had a rough start to his tournament with an opening round loss. How Crutch responded tells you everything that you need to know about this young man. Crutch ran through the consolation bracket on his way to a 7th place finish. While he was disappointed in his performance, his strong finish was the difference between 3rd place and 4th place for the team … and I do not want to finish behind Iowa. Ever.

Nolan Boyd completed his career with a 5th place finish. Boyd made it to the semi-finals in the championship bracket and gave Cornell senior Gabe Dean his best shot, but Dean is an incredible wrestler that over matched Boyd. Boyd then lost his final two matches to TJ Dudley of Nebraska and Myles Martin of Ohio State.

Preston Weigel again proved that he is the best top wrestler in the country. If Weigel has a grip on you, you are not getting away from him. If the talented sophomore can continue to improve from his feet and get takedowns, he will be a force to be reckoned with in this weight class over the next two years. The 6th place finish this year is the tip of the iceberg for this Cowboy.

Austin Schafer was the other Cowboy that did not reach All-American status. The rumor on the street is that Austin was wrestling hurt, and while he gave it his all his injury and his lack of size in this weight class ended up costing him an opportunity.

Disrespect is not my favorite word in the English language. I think that people use it as an excuse for acting like a jerk. Unfortunately it is the best word that I can think of to describe Dean Heil the last two years. “Disrespected.” One third of the journalists polled selected the defending champion to repeat.

Nobody expected Dean to claim the title last season. Heil pointed at his heart after taking the win on Saturday night, and that says it all. The Cowboy junior has a ton of heart, and we should all be excited to watch him capture his third title next season.

Penn State is really, really good at this

I hate having to write this, but it is true. Penn State is awesome at wrestling right now. They had 5 champions, and only one of them was an upperclassmen. Next season they are more than likely going to start with 6 guys ranked No. 1 in their weight class.

Cael Sanderson has the wrestling world in the palm of his hand right now, and he deserves it. The style that the Nittany Lions wrestle is aggressive, is exciting to watch, and will remain that way for at least the next two years.

Oklahoma State Wrestling is going to be just fine

Looking ahead is exciting if you can see through the Nittany Lions. Coach John Smith has the top rated recruit in wrestling coming in, Daton Fix of Sand Springs. The Cowboys will also be returning 6 All-Americans and a two-time champion.

Piccinnini, Brock, Fix, Heil, Smith, and Rogers will be names that we will remember for a long time. It may not be until 2019 or 2020, but Oklahoma State will bring home No. 35 in the near future.

I wanted to take the opportunity to thank Kyle Porter and the rest of the staff at Pistols Firing for giving me an opportunity to write these previews and recaps of Oklahoma State Wrestling this season. It has been a great experience for me.

The Daily Oklahoman and the Tulsa World cover wrestling very minimally, and you never hear about it on the radio so I thought somebody needed to pick up this ball and run with it … instead of sitting around and not doing anything about it, I’m glad that the Kyles gave me a shot. This experience has truly broken up the mundane day-to-day of a 27-year-old sales manager at a software company.