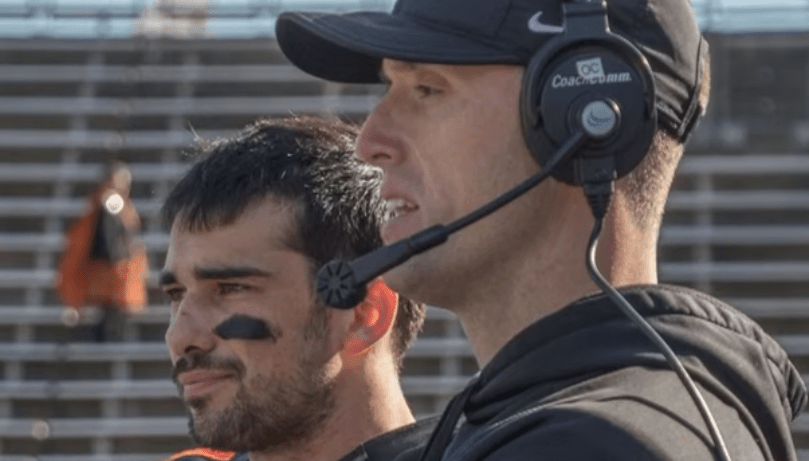 Oklahoma State’s recruiting efforts got a boost this week when it called up Princeton coach Sean Gleeson to succeed Mike Yurcich as its next offensive coordinator.

Gleeson, whose age isn’t readily available (but can’t be a day over 40 based off my young and fresh eyes), doesn’t bring decades of experience like a David Yost; he’s not a flashy name like Graham Harrell, either. But he’s a brilliant tactician with a good track record in his limited experience.

In any case, 30 years old or 50 years old, Gleeson should bolster OSU’s recruiting efforts for these reasons.

Mike Gundy is low-key held in high regard as a social media wizard because he once went berserk on a reporter and went viral and, from time to time, he tweets out emoji’s that serve as subtext to whatever the flavor of the week is. But the cold hard truth is that Gundy does not run his own Twitter account. So relating to youngsters via DM, or Snapface or Facechat is probably not his most-used channel of communication.

But in limited exposure with Gleeson on the Twitter.com, he’s pretty good! He uses emoji’s, punctuates appropriately and is to the point with his messaging, and has a little swagger to his social media game that seems to bode well for his Division I prospects. Like this. Shots fired! He could be the best Pistols Firing intern of all time with this zinger.

No photoshop. No hashtags. Just trophies. Congrats to the Lovett family on raising an incredible son. pic.twitter.com/n44KOSxaK6

Social media goes beyond sending some cool tweets, obviously. He’ll need to interact with prospects via DMs, by text and by phone, and, maybe, by Instagram. Or Snapchat. Whatever channel he uses, his Twitter channel serves as a good indicator that he’ll enmesh himself at OSU just fine.

Let the record reflect that Sean Gleeson, in fact, has already went and beat Bama — on the recruiting trail. He did so in the 2018 recruiting class when landing four-star pro-style prospect Brevin White out of Lancaster, Calif., over the Tide, Boise State, Memphis and a dozen other programs. Here’s the story of when White was committed and got the Alabama offer.

He called Gleeson and told him he was considering the Crimson Tide, and visited Tuscaloosa, Ala., in late January. He met with Saban in his office, then the Tide’s offensive coordinator and quarterbacks coach, then one of the university’s deans. His host on the visit was the hero of this year’s national championship game, true freshman quarterback Tua Tagovailoa.

When White got back to California, he took a week to consider both schools. Then he called the Tide’s coaching staff.

Thanks, but no thanks, he told them. [Washington Post]

Now, a Princeton education is definitely a great carrot to hold out in front of an aspiring high school prospect. But I care not about the awesome carrot — beating Nick Saban in anything is a win.

In any case, he’s young. Here’s a look at his resume. It is not long, and quickly escalates from high school bowling coach to play-caller for Ivy League program.

The point in noting his age isn’t to say that he’s got a long career ahead or that he’s going to be at OSU forever — he probably does and I’d bet he is — but my point is that he wasn’t in college all that long ago. Relating to kids, especially in the age of social media, is a near-impossible task for 55-year-olds. They may be able to dial up an offense, sure, but corresponding with kids prepping for prom with no cares in the world is a rough deal. Gleeson should be able to master that as well as anyone, and if his track record at Princeton translates, he should be able to do so at a high level immediately at Oklahoma State.