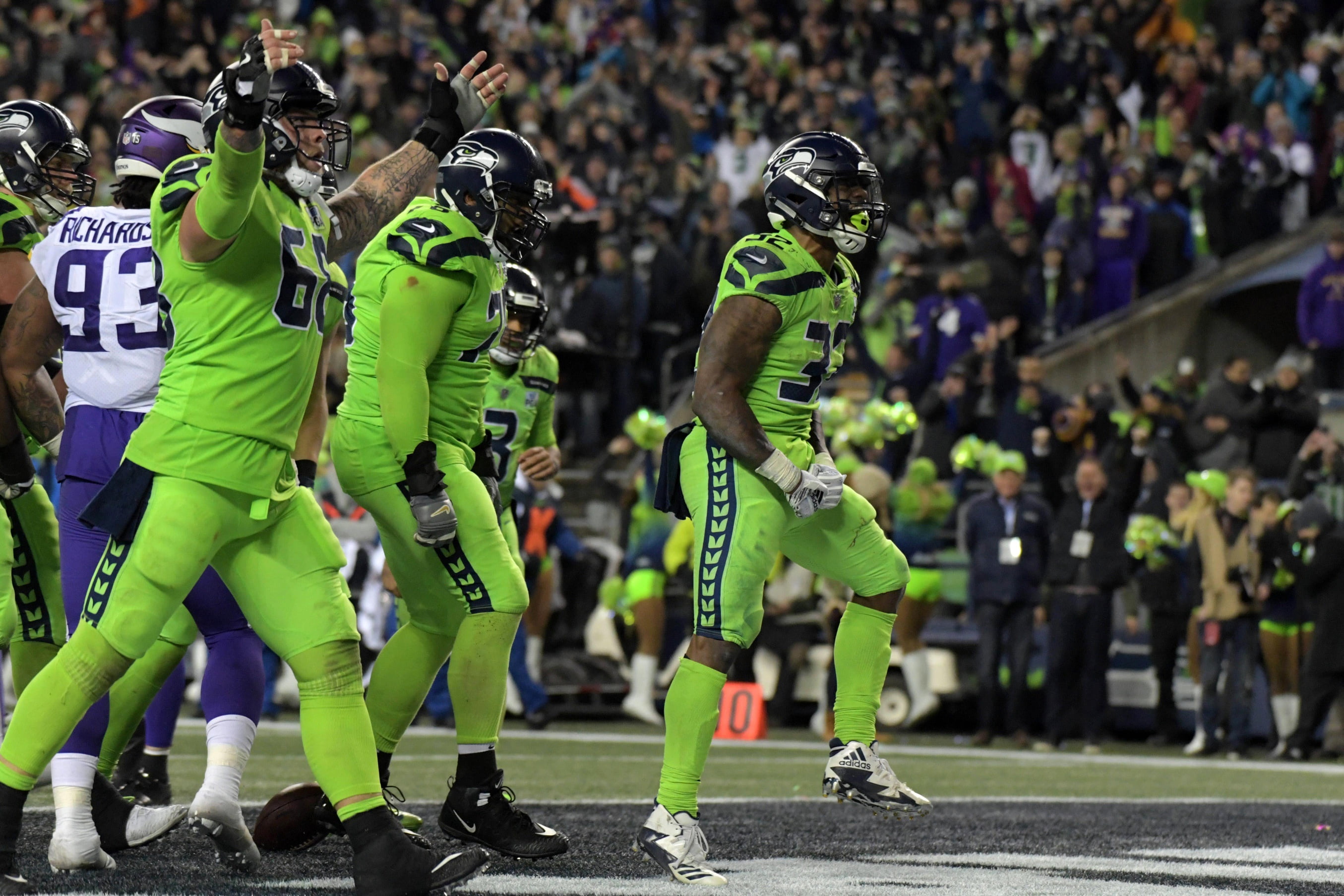 It was an eventful Week 14 for former Cowboys in the NFL. Let’s start with a couple of them who showed out on Monday night.

The pair of former late-round Pokes each made plays during Seattle’s 21-7 win over the Minnesota Vikings on Monday night. Carson kept his feet moving for 90 yards, and his fifth TD of the season, on 22 carries as the Seahawks ground-and-pound attack wore down the Vikings defense.

Speaking of dudes, not many people can make that “Action Green” uniform look good, but somehow Carson pulls it off.

But Tre Flowers may have had the more impressive outing as he and the Seahawks defense held a more than capable Vikings offense mostly at bay. The rookie CB led his team with eight total tackles (seven solo) including a couple of impressive grabs in space.

His background as a hard-hitting safety bleeds through into his fast-growing reputation as a physical cornerback, especially for a rookie. Here Flowers showed his chops as an open-field tackler with this nice play on Dalvin Cook.

In the passing game, Flowers — as he’s quickly becoming accustomed to — lined up opposite a dynamic playmaker. The flavor of this week? Stefon Diggs. The fourth-year pro did haul in a 48-yard reception with Flowers draped all over his outside hip, but the rookie got the better end of the deal. The two traded off holding penalties on each other — and Diggs had four catches for 76 yards — but the Vikings were held scoreless until the waning moments of the fourth quarter.

Flowers almost recorded his first career INT on a late heave by Kirk Cousins to the end zone, but he was able to make this nice play on the ball.

Blake Jarwin ‘Came Up Big’ for Dallas in OT Win

Most of the headlines from the Cowboys’ 29-23 overtime win over the Eagles will involve the big night from wideout Amari Cooper who amassed 217 yards and three TDs (both career highs), but another Cowboy set some personal bests on Sunday.

This was a pretty impressive catch by Blake Jarwin on 3rd down. pic.twitter.com/chRjp2EPkP

Dallas head coach Jason Garrett, whose seat has cooled as his Cowboys have gone on now a five-game winning streak, spoke highly of Jarwin after his big game.

“Blake Jarwin really came up big over and over and over again,” Garrett said according to SportsDay. “Made some contested catches, made some strong runs after the catch and made some positive plays.”

Marcell Gets the Best of James

Football is a team sport and neither of the pair of opposing rookie receivers ultimately decided the 24-21 upset by Oakland over Pittsburgh. But while the Biletnikoff winner and second round pick has struggled to find consistency in the Steel City, the seventh round pick has flourished during his short window of opportunity in the Bay area. That played out again on Sunday.

One week after being sidelined with a non-injury scratch, James Washington saw the field for 22 plays on offense, grabbing two of the four balls thrown his way for just 11 yards.

Across the field, Ateman caught three of his four targets for 45 yards.

Ateman has started all four games since he made his debut midway through the year and has racked up 127 yards and a score, catching 12 of his 23 targets in those affairs. In 11 games, Washington has caught just 10 of 29 targets for 88 yards and a score (that seems like it was last season).

My tongue-in-cheek prediction that Ateman would end up with a better year than Washington after his debut seems almost inevitable if things continue on their present course.

Rookie WR Marcell Ateman said that there's no quit in this #Raiders team.

"Like Coach Gruden said, it’s the fourth quarter of the season, it’s the last four games, we just have to put it together to show people that we aren’t going to quit by any means.”

• Emmanuel Ogbah grabbed a pair of tackles during the Browns’ 26-20 win over the Panthers.

• Tyler Patmon has been relegated to a special teams role, not appearing in any plays on defense since Week 10. He did not record a stat during Jacksonville’s 30-9 loss to Tennessee.

• Russell Okung and his Chargers continued to roll, taking down the Bengals 26-21 for LA’s third-straight win.