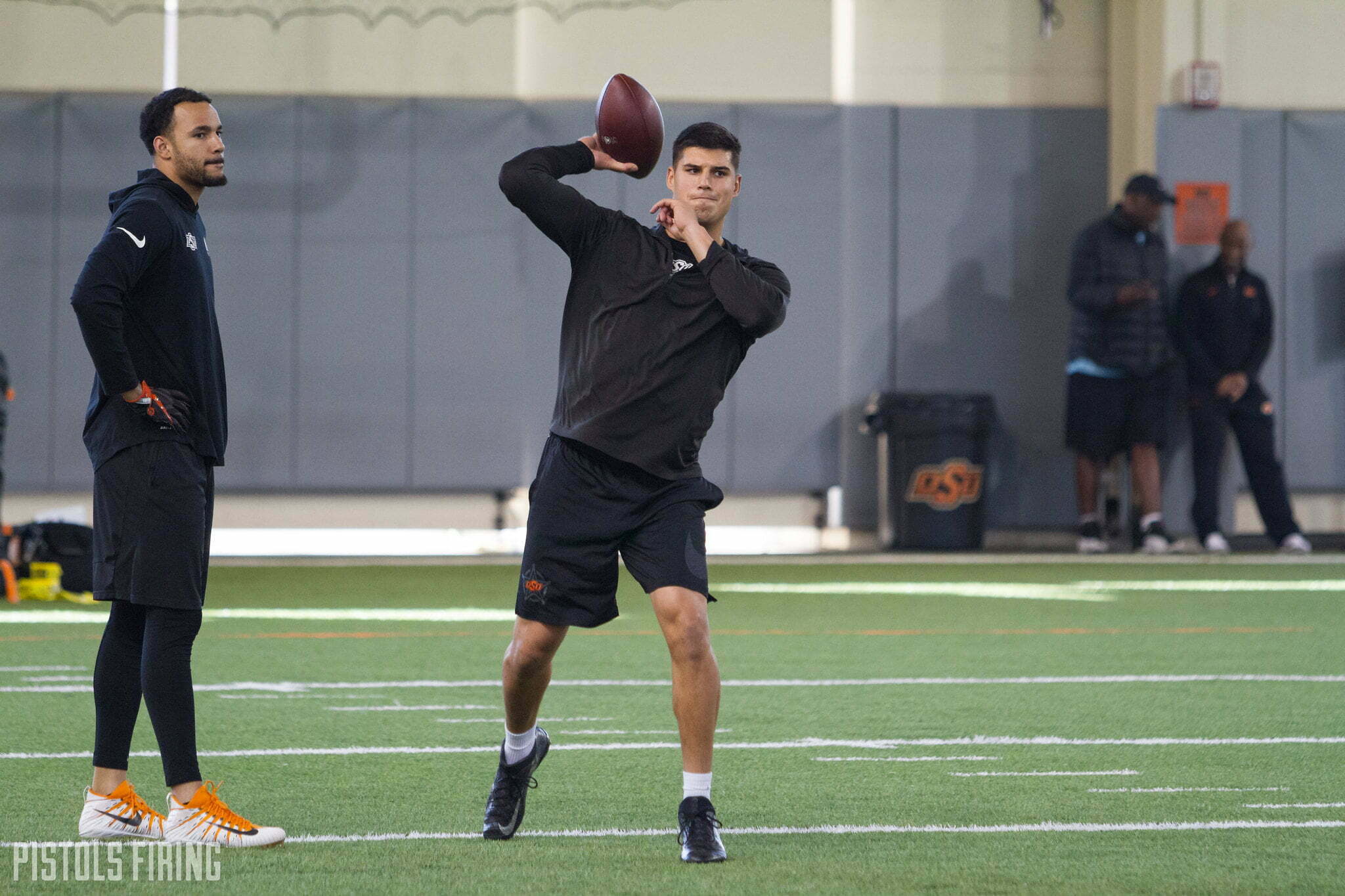 It might feel balmy outside but summer’s days are numbers. NFL teams kicked off training camps last week and the preseason launches tonight with the Hall of Fame game between the Pittsburgh Steelers and the Dallas Cowboys.

Let’s start there as we preview Pokes in the NFL preseason, and work ourselves into game shape for the upcoming gridiron grind.

Rudolph Gets the Nod in Preseason Premiere

There has been some noise that newly signed QB Dwayne Haskins would give the Steelers’ seasoned backup a run for his money (and he might). But for now, Mike Tomlin is going with the tenured No. 2.

Mason Rudolph will start things off in Canton on Thursday night, and keep an eye out for his fellow former Poke James Washington, as well.

Across the field, we should see Rudolph’s former target, Cowboys tight end Blake Jarwin. After seemingly locking up the role of TE1 in Dallas last training camp, he went down with a torn ACL in Week 1.

But Jarwin is back, healthy and appears ready to retake his role.

Several Panthers were apparently involved in some extra curricular activities at the end of Wednesday’s practice that when Panthers wide receiver Robby Anderson and cornerback Troy Pride Jr. got into a scuffle after the latter shoved the former out of bounds during a drill.

And rookie RB Chuba Hubbard apparently also got mixed up and had to run laps. I bet he finished first.

Head coach Matt Rhule stated after practice that no one was yelling at the players but that those actions have repercussions, referring to players that would want reps to make the team and forfeiting those to take a lap.

Probably not much to it for the rook but you’d definitely rather make hay for what you do on the practice field instead of running around it.

The third-year running back has struggled to find his footing in a deep Baltimore backfield, already behind a QB-run heavy offense with Lamar Jackson.

But Hill’s strengths could see him finally get the rock in more meaningful situations.

Hill can pop outside and turn the corner faster than either Dobbins or Edwards. In a passing situation, he is a better receiver than Edwards, and that might earn the former Oklahoma State running back more playing time, especially since the Ravens want their running backs to be more involved in the passing game. [The Baltimore Sun]

Teven Jenkins Yet to Practice for Bears

Chicago’s second-round pick has missed all of training camp as he nurses a lower back injury.

It’s a tad bit concerning for the Bears and Jenkins alike. These are decisive reps especially for someone they drafted to fight for the crucial starting left tackle position.

But hope is not lost that Jenkins can still return and compete for his spot.

As of Monday, Nagy wouldn’t rule out the possibility of Jenkins returning to camp and being ready to play Week 1. The Bears don’t have a deadline for when the team needs to shelve Jenkins and hand the job off to someone else.

“I think we still have plenty of time,” Nagy said on Monday. [NBC Sports]

What’s a guy got to do to get paid?

The former OSU sack specialist went on a tear during his first season with the Dolphins last year, racking up a career-high nine sacks. None the less, he enters 2021 without an concrete plan for where he’ll be playing in 2022.

Ogbah was viewed as one of the best signings under Miami’s new regime in thanks to his breakout 2020 season. He previously spent time with the Browns and Chiefs but saw injury limit his effectiveness during both stops.

But Ogbah’s still optimistic that he will get to continue his career in South Beach, and continue being a menace to opposing QBs.

“I always view myself staying here long-term which is always a goal of mine,” Ogbah told The Palm Beach Post. “But whatever happens I’m just going out here balling to help this team win games.”

Unfortunately, Tyron suffered both a reported ankle and/or then a groin injury (two different outlets) that kept him out of practice on Wednesday. Hopefully he’ll be back on the field soon since he appears set to build off of his breakout success in 2020.

Rodarius Williams Takes. It. Back

The sixth-round draft pick is doing his best to make a splash during the Giants training camp. The best way to make a name for yourself as a DB is to snag an INT.

The other half of a former OSU cornerback duo, A.J. Green is also showing out on practice field.

Green went undrafted in 2020 but signed with the Browns practice squad before being elevated to the active roster during the season.

NFL teams have until August 31 to trim their rosters down to the league-mandated 53. Several former Cowboys will be safe when the regular season kicks off in September, but several others are competing just to earn spot. Here’s a look at where each of them