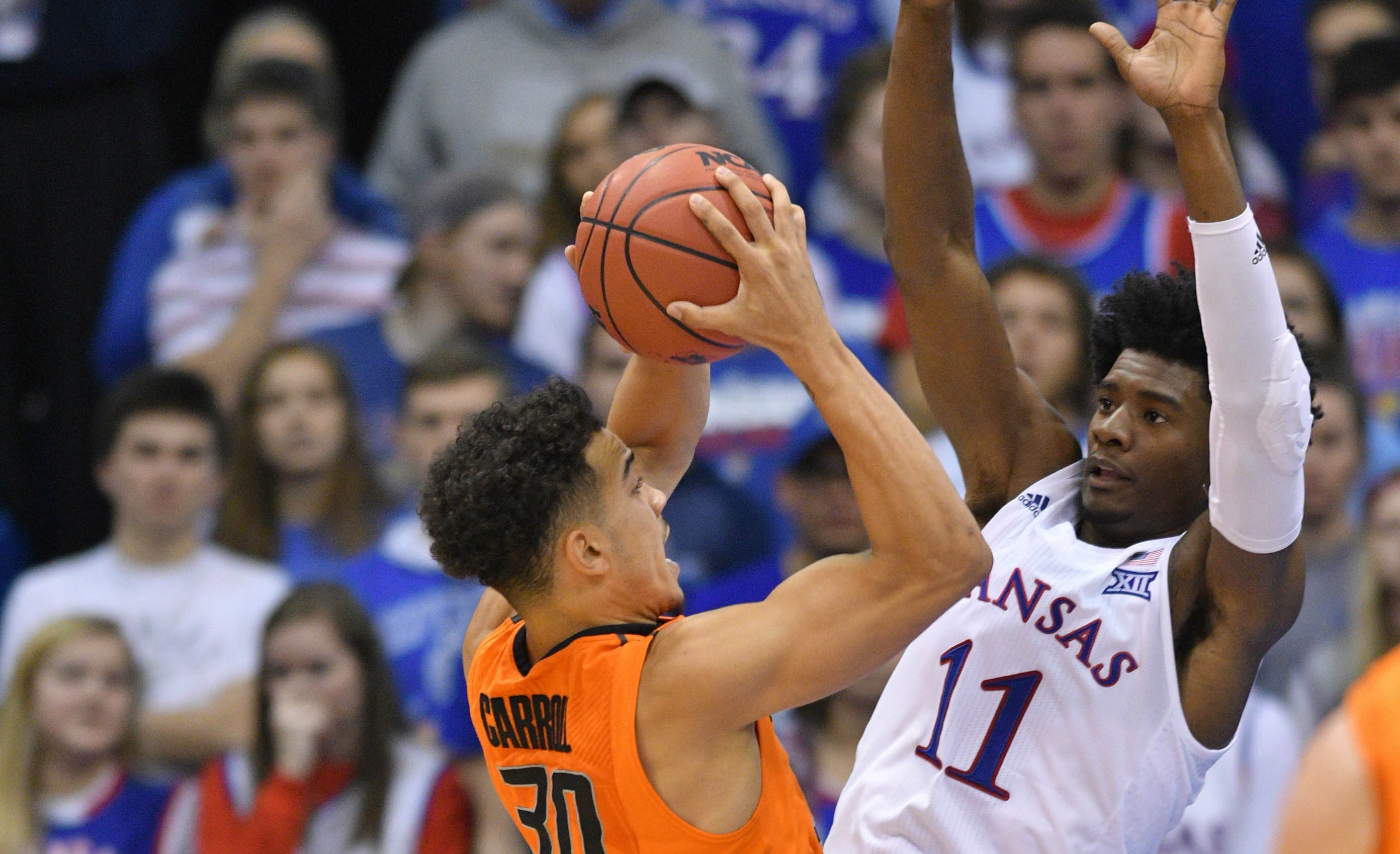 That was a college basketball game! Whooo boy, that was fun. Oklahoma State fell to Kansas 87-80 in Allen Fieldhouse on Saturday, and there is a LOT to talk about. Let’s jump right in the notebook on Saturday’s game.

• First, the officiating. I mean, what did you expect? Kansas took 45 free throws, OSU took 14. Josh Jackson took 17 alone for KU. It’s Allen Fieldhouse. It’s going to happen. Compound it with the fact that they always have an aggressive, driving team and … you just have to know what you’re up against before the game starts. I’m sure Underwood and Co. did. It’s us fans that forget.

• Good job on not moving the game to one of your 378 different channels of distribution, ESPN. Also good job on scheduling basketball games two hours apart the same way you schedule football games three hours apart.

• Jawun Evans is a great player. He was not awesome on Saturday. He went 6/22 from the field and did not take over the game in the right way. Here’s the deal: Brad Underwood’s offense is predicated on ball movement, cutting, layups and threes. It’s everything Travis Ford’s offense was not. Jawun took the air out of the ball and tried to take on KU’s monsters by himself. It didn’t necessarily cost OSU the game, but it didn’t help.

• Mitchell  Solomon! Holy crap, what did I just witness?! Solomon had 16-4-1-3-1 on 6/6 shooting in 21 minutes and displayed some legitimate post moves. Canned goods!

• Davon Dillard! He’s a dude! Dillard had a 6-8-3-1 line (!!!) to go with the felony he committed on future lottery pick Josh Jackson. I don’t know what the future holds for him, but if he goes on to have a career in Stillwater, this game will have been the launching pad for that career.

• Oklahoma State did not trail for the first 26 minutes of the game. You could have won some cash in Vegas betting on that before the game started.

• No idea how KU fans feel about Landon Lucas, but I think he’s pretty good. Not Mitchell Solomon in Allen Fieldhouse good but not bad either.

• Frank Mason didn’t have a great game, but I love his demeanor on the court. Never changes, he slows the game and it always feels like he’s in complete control. He bends games to himself which is probably going to win Kansas another Big 12 title (which they’ll promptly sacrifice to a 10-seeded Drexel in Round 2 after Josh Jackson misses 24 free throws).

• Lindy’s shot is so, so pretty. I’m all the way in on him. I saw some Twitter/text chatter that some folks aren’t sold. Does he need to get stronger, play better defense and figure out what position he’s going to play? Sure, who doesn’t. But you can tell he’s got the “it” stuff. And that shot, I’m weak.

• Announcers: “Interesting, KU only committed four fouls in that first half.” Nah, not really that interesting.

It's a character building weekend.

• Here’s a bottom line for you: Kansas just has more horses when it comes to getting stops and getting boards at the end of games. Not exactly breaking news, but OSU slinks a little in crunch time (though the effort was certainly there today) and KU ratchets it up a couple of notches. Something to aspire to for Underwood and Co.

• Speaking of Kansas, I’d forgotten their fans’ ability to make Alabama football fans look like Rhodes Scholars! Not everything is for the National Championship of Twitter, guys.

Do we get half a win for not letting them sing Rock Chalk?

Ford was the lottery…HEY WE BEAT KANSAS!…and then lost to TCU next week..

We've got sound financial planning and no credit cards now

• There were only 19 bench points combined between the two teams. OSU had 16, Kansas had three.

• I love Allen Fieldhouse. I LOVE it. It’s better than GIA (DO NOT @ ME). Don’t get me wrong, GIA is elite, among the best. But The Fieldhouse is perfection. The light streaming in through the rafters. The historical museum under the bleachers. The referees 5-star bungalow just outside the west end. It’s a great place. Unfortunately for them, it just doesn’t get as loud as GIA on a mid-February night.

• Davon Dillard is Jhajuan Seales? Also, he was awesome on Saturday — just a menace all over the floor, but he sometimes looks about as interested in playing defense as I do in changing a dirty diaper.

• OSU hustled back so hard to get tips and steals on the defensive end. Also, they didn’t quit. They didn’t mail it in. Everybody played smart (except maybe Evans?) Despite the loss, this can be a turning-point game.

I want to tweet something about these foul calls pic.twitter.com/h8y0rPvinw

• The Solomon pick and roll was spectacular. He was unconscious and Evans is amazing at running it even though he went to it one too many times. Imagine Evans running that play with an elite athlete.

• Things that just keep getting better with time:

Davon Dillard tips one in and a ref is not happy with him. ??? https://t.co/gfQMzO6TYf

• Jeffrey Carroll now has seven 20-point games! His career high coming into the season was 18 against Iowa State last year.