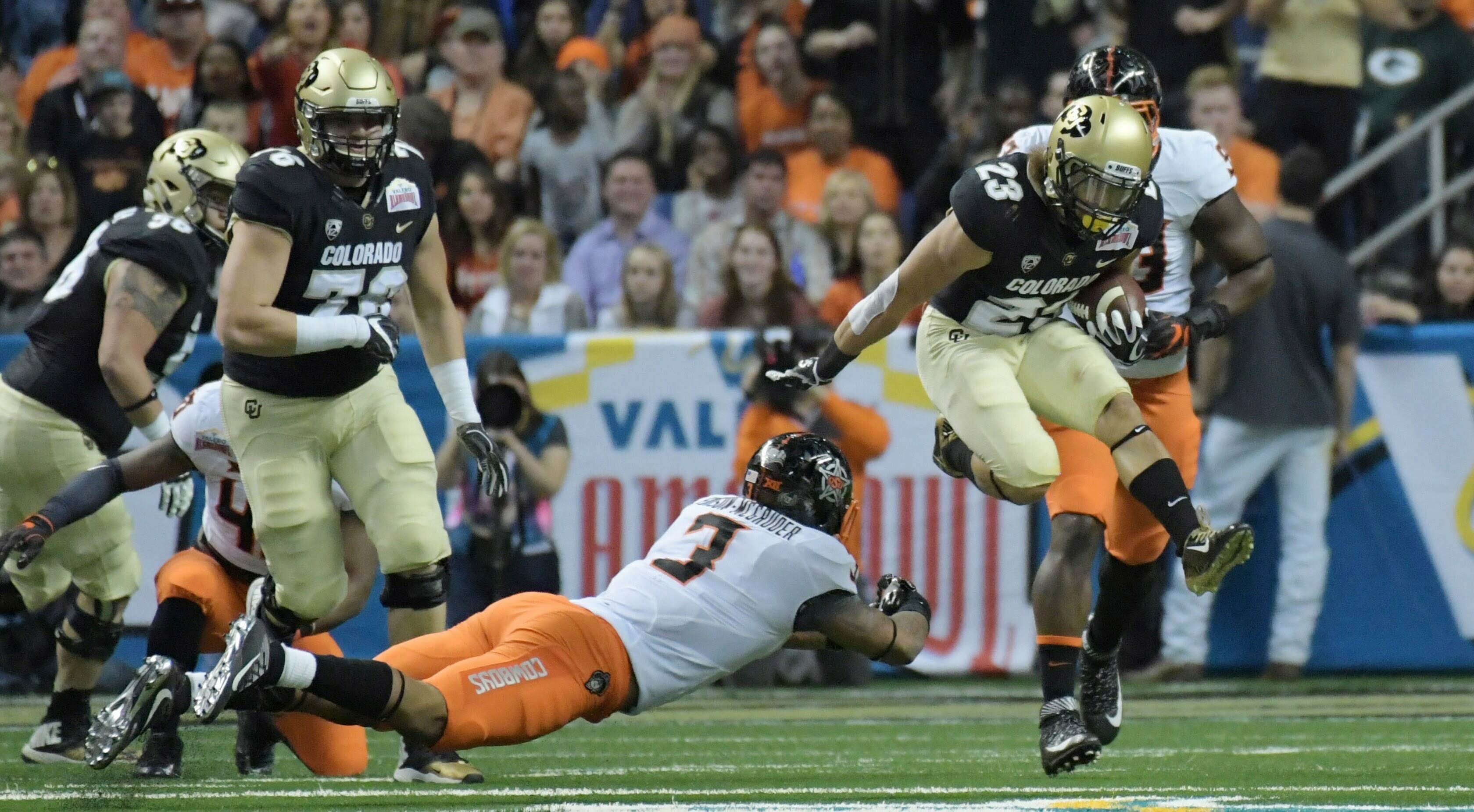 My 10 thoughts are here, but it’s time to empty the notebook on Oklahoma State’s fifth 10-win season in the last seven years. Let’s get to work on a night in which Mack Brown channeled his inner Mike Gundy over and over again.

• Why do networks continue to insist on scheduling football games three hours apart? The only result is that ESPNNews gets outrageously good ratings because of how many games get moved off the main channel so we can actually see the first quarter.

• This is so badass.

• This really should have been an elite uni matchup. If you swap the Ed Hardy lids for an orange one with a black chrome brand logo on the Oklahoma State side then we’re talking about an historically great uniform showdown.

• Mack Brown said “ack-u-rut” about nine times. It was amazing. I have no idea if he was trolling PFB, Mike Gundy, both of us or if that’s just how the man talks. But I loved it every time.

• Justice Hill now has six 100-yard games (and a 99-yard game). And they all came after the non-conference portion of the schedule ended which is remarkable.

• Speaking of Lindsays, there were times in Gabe’s career that I thought he might still be playing at Oklahoma State in 2016. If people think Keiton Page’s career lasted a long time, then they weren’t around for the Gabe Lindsay era.

• OSU’s first drive was a big boy drive. They opened the playbook, hit all the right notes and just couldn’t finish. Thankfully this was more like the TCU game (the defense held OSU’s opponent at bay) than the OU game (OSU lived to regret not scoring early).

• Only USC and Oklahoma State have shut out Colorado for a half this year. Both in the first half.

• What was so impressive about the way OSU won is how dominant it was physically. Early in the game Colorado was popping everybody in orange and black (including Chris Carson), and OSU just kept coming until the Buffs wanted no more. It’s a stunning thing to watch Oklahoma State win in this manner.

• Did you know: Oklahoma State came into this game with the best average starting field position position in the country (defensively).

• This was the highest-ranked matchup in Alamo Bowl history. It was not, however, (even close to) the best game.

• Did anybody else think the trick play QB run by MacIntyre’s son was dumb because you’re completely taking the actual QB out of the play and losing a blocker in the process?

• Sefo Liufau made Trevor Knight look like Aaron Rodgers when it comes to passing accuracy.

someone face planted in the sack race between the first and second quarters, in case you were wondering.

• I always love it when bowl signage says “visit Houston” or “visit San Antonio” as if Houston and San Antonio are right up there with Vancouver and Napa when it comes to the “where should I plan my next vacation?” power rankings.

• The Washington dropped TD  was like seeing an alien. I’m not sure what I just experienced, but I’m pretty sure I never want it to happen again.

• For halftime entertainment, the Alamo Bowl should have lined up Chris Carson at one end zone and Ralphie at the other end zone and had them meet at midfield. You know, just to see what happened. • Colorado fumbled three times (and recovered them all!)

My dad was in the middle of a lecture about modern players shunning knee pads until the Gullet stopped him dead in his tracks.

• One of the great OSU GIFs ever.

"Are you not entertained?" pic.twitter.com/OBkYi8ODjf

Ashton Lampkin knew. This was before they finished measuring. pic.twitter.com/kcyljAJRv1

Someone tell Gundy that Boone has $100MM on Colorado +40

All love for the man @DezBryant pic.twitter.com/3xys7Ny0yz

• Do not ever speak my name again.

• How arrogant was CU to play man all night against James Washington? Do they watch film?