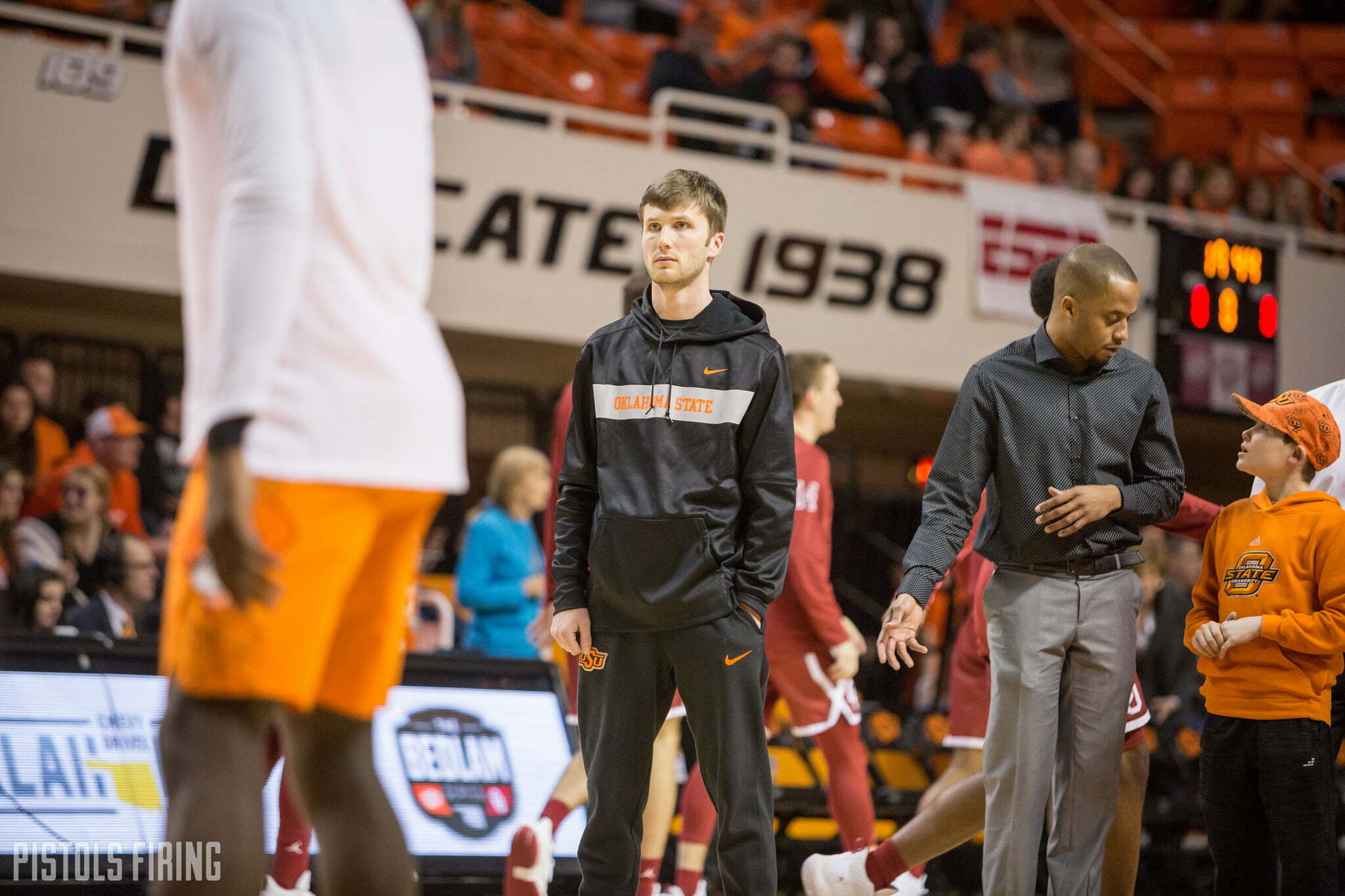 Here are some notes from the news conference, and if you’d like to watch the interviews in their entirety, you can do so here.

Tanner Taylor, formerly an Oklahoma State basketball manager, is the latest addition. At 6-foot-1, 170 pounds, Taylor is the shortest and lightest on the team.

Taylor is a junior from Emporia, Kansas, who started his journey at OSU as a walk-on to the football team. Boynton said he didn’t know the specifics on what happened with Taylor and football, but Boynton said Taylor showed up and asked to be a part of the basketball program, where he has served as a manager for the past two seasons.

It doesn’t look as if the additions will stop with Taylor, though.

“He played both sports in high school,” Boynton said. “He’s a good athlete. He’s a body. He can help us in practice right now. There probably will be a couple more we add here before too long. He was easier because he’d been with us, so we knew more about him to move through all the paperwork and all that stuff. With the others, we’re still trying to finalize it. I don’t wanna get too far ahead, but we’ll almost certainly add two or three more guys.”

The Cowboys have a new slogan to add to “Let’s Work” and “Commitment to Excellence” in “Just Us.”

Boynton said at this time of the season, some teams begin to separate from others because some teams give up because of mental fatigue and the inability to fight to continue to compete and work as hard as it takes to have success.

He said he wants his team to come together and block any outside noise that causes those teams to start to mentally fatigue. He said it’s especially true for the team’s younger players who haven’t had to deal with these struggles to this point of their basketball careers

“I told my team this, my dad, who’s my best friend in the whole world, can’t talk to me about strategy in a basketball game,” Boynton said. “He can’t. He’s not allowed to. He’s not here every day. He doesn’t know these kids. I love him, but as soon as he starts talking about ‘Why didn’t …’ ‘Dad, we’ll talk tomorrow.’ Because we’re not gonna have that type of conversation. I’m gonna do that with my staff, who’s here every day, who knows these kids and it’s going to be just us for the rest of the year.”

Mike Boynton used seven players in Wednesday’s loss to Oklahoma, but he doesn’t have much of an option.

The Cowboys have eight scholarship players on their roster, one of which is former walk-on Trey Reeves. That led to Isaac Likekele, Thomas Dziagwa, Lindy Waters, Cameron McGriff, Yor Anei and Curtis Jones to all play more than 25 minutes Wednesday night. McGriff played a full 40, Dziagwa played 37 and Waters played 34 before he fouled out.

The Cowboys aren’t going to magically get a few more scholarship players added to the roster for the next few months, so Boynton is thinking about different ways to keep his players fresh.

“I may have to be a little bit more liberal with using my timeouts,” Boynton said. “That’s something I’ve looked at internally. I usually try to save them. All these games are close. The last four minutes, you’ve got a ballgame on your hands, and you wanna be able to help your team as much as possible to set up a shot, set your defense up, but considering the circumstance, I may need to use them a little bit early on. Maybe I use two timeouts in the first half. Maybe I use one earlier in the second half. That’s something I’ve thought about.”