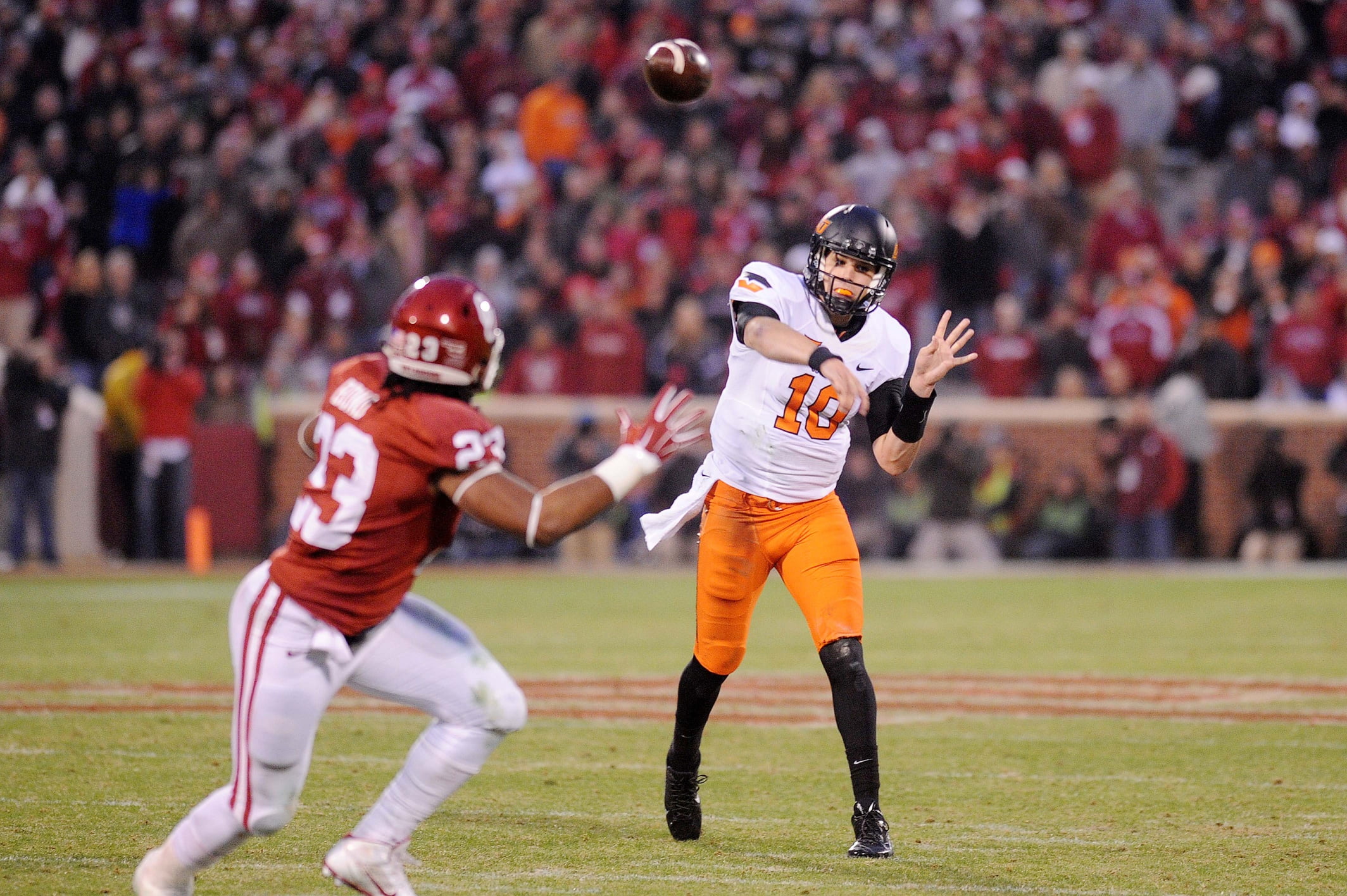 10 Thoughts were posted last night (and they were long) but that didn’t even come close to summing it up. So here are my lingering thoughts and a few notes from what was one of the most memorable Bedlams ever.

• The option pass play OSU ran in the first quarter brought me copious amounts of joy and excitement. I want to run it 10 times in the bowl game.

• Why does OU even have receivers? They totaled nine yards and without Sterling Shepard (or maybe with Cody Thomas) they’re a hot mess. Might as well just line up in the I and see what happens.

• Speaking of Thomas, I was rooting so hard for him not to get hurt so Blake Bell could figure on live national television how to curb-stomp my soul once again.

• The direct snap to Perine with Thomas off to the side was bizarre. Why not just put Bell back there and run the Wildcat with either him or Perine?

• I feel like nobody wanted to tackle OU’s running backs, least of all poor Ramon Richards. Not that I blame any of them.

• Speaking of…Perine had more rushing yards in the first half than any OSU running back has had in a game all year.

• How good is Rudolph at avoiding the rush? How many more games would we have won if he’d been doing that all season instead of simply for the last 60 minutes? At least one, right?

• His check-downs are also really good. Generally, not just for a freshman. He’ll go through two or three reads on every snap. So impressive.

• Last random thing I love about him is his post-handoff fakes. The cameraman and I were dizzy by the middle of the second quarter.

• I’ll make the list soon but this was, what, the 5th best (?) win of the Gundy Era? Glenn Spencer said it was top five of his tenure, at least.

• I wrote the note “We’re trying to get Roland to the edge down 14 with 7 minutes left?” — I think I’m just going to leave it at that. Seems good enough.

• The timeout situation. We need to talk about it. It worked out but I don’t think OSU should have called its timeouts when it did (4:16 and 4:11 left). What is there to gain? I guess the thinking is that if you can tie it at 35 all you can sort of control things without your timeouts from there on out but that was really early.

• Gundy went 40-year-old dad baseball hat for the second straight game. Has that ever happened?

• What was up with the Women’s World Cup draw at halftime? That was weird.

• Referees should start throwing pass interference flags based solely on how much receivers get up and look around for them after a play.

• We didn’t become the first team in an amount of time I couldn’t figure out (at least this century) to go without a fumble recovery in a season!

• I would pay $50 for an app that mutes background noise (i.e. Boomer Sooner).

• Not sure I’ve ever seen Glidden do this.