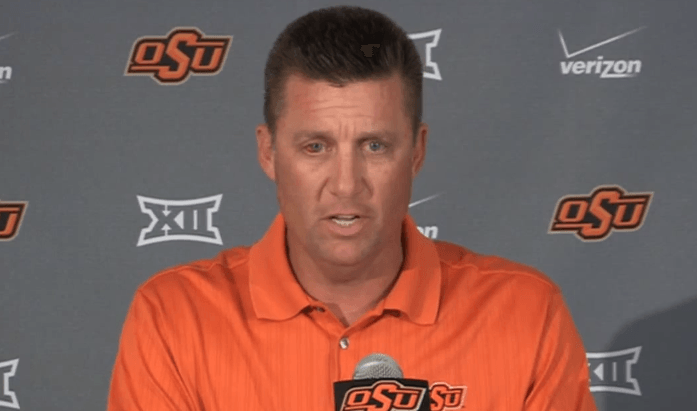 • Said they had a good practice last night. But they have to get “back to the basics. Still have a lot of work to do. Our overall team concept has to improve.”

• Talked about playing “dead” environment at KU (reporter’s word, not Gundy’s): “We need to self-start. Mature teams have to learn to self-start, start fast and play with a lot of energy.” Couldn’t agree more – not that it matters – but, that’s what good, big-boy teams do.

• Said, regarding KU’s defense, “people aren’t just moving the ball up and down the field on them. We can’t play average for a quarter or a half and expect to win.”

• On Daxx on the road: “I think he’ll be fine. In our system I don’t know if there’s any difference based on where you’re at.”

• Then was asked how the weather might affect Daxx in Lawrence if it’s windy. “Sixty-five degrees, eleven mile an hour winds. I’m just answering your question.” 11? Pretty specific. He’s got a GA running a Doppler somewhere?

• Coach was asked about the yards-per-carry average dropping over the past three seasons down to 3.9 ypc as of today: “We’re going the wrong direction. That has to be better. We’re just not very explosive, although we have had some better up-front blocking.”

• Fielded a question on the basic-ness of the playbook right now: “Three areas: No. 1 is Daxx. No. 2 is offensive line. No. 3 is we can’t run the ball real well right now. We’re basic vanilla for the most part.”

• Very tongue-in-cheek comment here on O-lineman Zac Veatch being announced via Twitter as the Offensive Player of the Game: “I think he got it by default.”

• Coach clarified some on the whole using-Tyreek-as-a-decoy thing: “Tyreek is not a decoy. He’s too valuable when he touches the football. He just needs to get more touches on offense.” Sorry, but haven’t we now heard that for three weeks…?

• More on Tyreek: “Most teams are very attracted to him during the game.” Ok. “Definitely prefer to have him touch the ball more than being used as a decoy.”

• Robert Allen asked about Ofa and his impact on the team: “Our team rallies around him. He’s my 10-year old’s favorite player because of his long hair.”

• “The other players like his culture.” And the horse casseroles.

• “He gets upset and that helps him. You want defensive linemen with bad attitudes toward the other team.”

• Had this to say about Daxx’s game overall: “Daxx graded out really well. He was 28/34 on ‘key reads’.” Not sure exactly what “key reads” are but Coach seemed pleased. “He’s going to throw the ball on time. When he does our receivers need to be in the right spot.”

• About the progress of the young guys: “Weeks 8-9 are always a concern for us for their conditioning. Very pleased overall with the young guys, including offensive lineman. We’re just not very good. There is no fast-forward button with developing players.”

• Coach was asked about the Cowboys moving up in the polls: “I’m not sure we’re 16th in the country. Of course I’m not sure if the teams above and below us are in the right spots either. The parity continues to grow. Everybody’s vulnerable for the most part.” Saturday, man!

• He was straight up asked a question I’ve wondered more than once: “What if Daxx loses his helmet?” That’s a legit question. Great answer though: “Don’t want to have to cross that bridge right now. We’ve taken that into consideration, but haven’t had to cross that bridge yet. We’ll just put a double chinstrap on him.”

• Took a question regarding Dez and Dan Bailey: “We really get a kick out of that. We take a lot of pride in those guys. Dez may be as exciting a player in the NFL right now. And, the kicker’s pretty good.” The kicker?

• He said he “almost cut Bailey” but couldn’t remember why he didn’t. “Somebody kicked before him…” Yep – Cary Blanchard, Lawson Vaughn…

• On why they kept Weeden around: “He showed up one day, said he wanted to play and we let him. We didn’t pay much attention to him. Minor league baseball guys who come back to play college football are usually a long ways away from the structure standpoint.” Glad they kept him around!