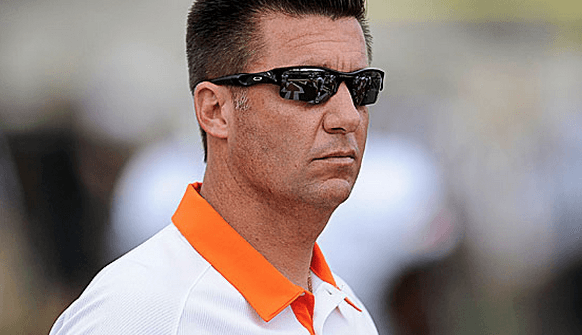 Ed. note: National Signing Day is all but over across the country and Mike Gundy discussed his class which ESPN has ranked No. 34 in the country. Here’s Clint with the details…

Have to say – it was pretty cool to see Gundy back behind the mic today. He had quite a bit to share (for him) about the incoming class of signees.

Instead of going along with the media questions and his responses, I’m just going to group them by subjects addressed, if that’s ok with you readers. Back at it…

His opening statement was, again, for our man Mike, full of emotion and vigor.

• “Overall we’re looking at guys ending up at 315-325 (lbs) on the offensive line. Excited about 300-lb. defensive linemen. We made some real strides up front.

We’ve added depth at running back and added a young quarterback we’re really excited about. So, I’m really excited, as you can tell.”

You know, I do think he may have cracked a smile…sort of.

Coach really opened by simply running through an alphabetical list of all the new guys whether they’re currently on campus or guys waiting to come in.

• Jeff Carr (Temple, TX – HS) – “Could be the sleeper of the class. We’re really excited about him. I’m as excited as I’ve ever been about a running back.”

• On Carr’s height (he’s listed anywhere from 5’7” to 5’9”): “After watching the tape on him, they could’ve told me he was 5’5” and I would’ve been ok with it…after talking to his coaches and hearing from the community about the person he is.”

• When did Carr show up on the radar? “A month ago. We lost another one (RB) a month ago, and, you know, it takes 2-3 backs to play in this league. It was a long, tough battle but it worked out for us and we’re excited about getting him here.”

• Did coaches go after him based on highlight reels or game tape? “I studied game tape. I believe in game tape more than highlights. You could take 1000 football plays and make a 30 play highlight on me – on you – and make it look good!” Mike in true form!

• Chris Carson (Butler County JC) – “He brings maturity, experience and explosiveness right away. Coach Singleton did a great job staying with him. He (Carson) wants to play in the NFL someday and he saw an opportunity here.”

I’m enough of a realist to know one is physically ready and the other, we’re not sure yet. But we’re very excited. Carson is two full years ahead of Carr in development. Not even that – 30 months.” ???

• John Kolar (Norman, OK – HS already on campus) – “Could be one of our biggest impact players. We’re really excited about his future. He’s done very well so far.”

• Is he the least talked-about 4-star recruit ever? “Two things – he committed early and has stayed loyal. Some guys commit early then reopen because it’s just not fun anymore, in my opinion.”

• On Todd Mays (ATH – Scooba, MS): “He’s going to get a lot of carries at running back, he’ll play the slot, and quarterback.” This seems interesting to me.

• Jalen McCleskey (Covington, LA – HS) – “He has great speed, like (Josh) Stewart in his ability to move and make guys miss, but faster straightaway. He can really roll. He’s a guy that can take the top off a defense.”

• On WR depth with just one signee: “Truth is, we have 10 guys coming back at that position’ it’s just not an area we needed to address.”

• “We need guys to be ready for the 2-deep as soon as spring ball. We won’t know on (Matt) Kellerman, (Brandon) Pertile and (Victor) Selako until April when they go through spring ball. The good news is they can all jump right into the 2-deep. We’ll have 17-18 linemen competing.”

• He said those jobs will be addressed “when I get back, middle of next week. Obviously I’m aware we have openings.” Insert your own joke here…

I loved this quote from coach just before he began to take questions: “It seems like we just finished up with the guys playing their tails off in the bowl game, big Castleman with the ‘check engine’ light going off down the sideline. Before you know it, in five weeks, we’ll be into spring football.” Wow.

• It was pointed out this class will break the streak of five straight Top 25 classes: “I never have been worried about that. I used to look at the numbers a lot more. What’s more important is these guys love the game of football and have a desire to compete.”

• Coach talked about recruiting Texas: “We have nine coaches covering the whole state. We get guys from Texas, Louisiana, and Junior College, but for the most part it’s Oklahoma and Texas.

“We’ve had some luck in Louisiana, Arkansas and the Wichita area. We’ll sign 17 guys next year, 1-2 will be JC guys, all the rest from this region.” That’s kind of cool.

“You know, we’ll never know. You’d like to think you can get information that’s akkrit on why young people jump in at the last second, or go somewhere else. Then, you find out a year later it was for a completely different reason. I wish I could give you an akkrit answer there.”

“Ultimately, for us, it was a great class and I’m really happy with the way it turned out.”