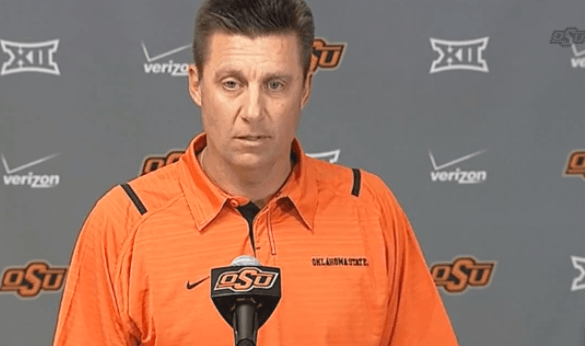 You know how, when you’re out with another couple and they start to fight, how awkward and uncomfortable that is? Well, that was kind of what today’s pre-Bedlam presser was…26 minutes of tense awkwardness!

Coach basically avoids discussing quarterbacks, coaching jobs, personnel changes and anything else – except for taking shots at The Boz and his brother.

Here are the highlights:

• Opened with a brief statement about who will start at QB Saturday and the overall picture of the team right now: “We’ll play the one that gives us the best chance to win based on this week’s practice. As far as injuries, we’re in good shape.”

Is that even possible – to be in good shape with injuries?

• On the importance of getting the 6th win and becoming bowl eligible: “It’s important for the practice time and obviously for the players – to win an extra game. We get 11 (additional practices) for us.There’s not as much long-term development that goes on. It’s mainly game-planning.”

• Coach was asked if preparing for Bedlam is different than other games. Was it for him as a player? “For me, it’s a game of preparation. Doesn’t really change for me during the week. Obviously it’s a big game for the people in this state.” Well, yeah!

• Is it weird with his brother, Cale, on the opposing sideline? “I honestly, a lot of times, forget he’s even over there.” Ah, brotherly love!

• Do the players have more nerves for this game? “Because of the exposure today there’s not a lot of nerves that go on.”

• Were there nerves for him as a freshman for his 1st Bedlam? “I obviously don’t remember.”

• Then, the tension level begins to escalate with questions about Daxx and Rudolph. He was basically asked if Daxx starts over Rudolph, what does he think about yanking the redshirt off Mason: “I would NEVER talk about personnel decisions that we make publicly.” Ok then…

• In an attempt to change the subject, Coach was asked if Yurcich identified Rudolph as a recruit. “No.” Then, how did that come about? “We’ll never talk about the recruiting process, personnel, or injuries.” Ouch…

• So, let’s go back to the upcoming game Saturday. Preparing for Perine – what do we do? “He’s a really good back, very mature, very strong, runs low to the ground. He runs through tackles. His yards-after-contact is good. He’s poorly coached.”

• Yes, he said he’s “poorly coached.” If you don’t know, his aforementioned brother Cale is ou’s running backs coach. But, there was NO smile – no grin – nothing!

• Christmas at Ma and Pa Gundy ought to be a hoot!

• Is there a situation in which we could see both quarterbacks play Saturday? “Could, very well could.”

• Is it less likely though, since they’re two similar QBs? “No – could be more likely.”

• Then there was this. This was a poor question, in my humble opinion and I don’t blame Mike for being a bit snarky. He was asked, as an underdog, does Rudolph give us a “puncher’s chance?” That’s cheap. “I’m not going to discuss who gives us the best chance to win and/or why.”

Why not? “Why do we huddle up then? Why don’t we just tell them our plays?”

• All of which apparently inspired Mark Cooper of the Tulsa World to write this immediately after the presser.

• I suppose he could handle it better, but I have to agree. I’m not going to give Stoops any more ammo than he already has.

If I can keep him guessing between the long-bomb Garman and the Freshman formerly known as Redshirt, then so be it. Eisenhower didn’t hold a press conference and say, “You know, it’s looking more and more like Normandy’s the spot.”

• The awkwardness continued with the reporter pressing on about one QB or the other and how they each (or one of them) played recently. Yes – it was that confusing.

Reporter: “Well he certainly was impressive in Waco, would you agree with that?”

G: “Daxx’s been pretty good at that too hasn’t he?”

G: “I thought you said Mason.”

R: “No, I did. I’m talking about whatever circumstance may unfold if Mason is the starter.”

G: “I’m not clear I understand what you’re saying.” Dismissed.

• So, will we get on the bus to Norman not knowing a starter since it’s a “game-time” decision? “No, I’ll know by then. ‘Game-time’ is just a popular thing that people say.”

• To some positive interaction…on Ogbah: “He’s doing great. He’s matured, grown up, came in as a guy that’s gotten really big. He’s committed to the game.

“He’s playing hard, he’s been a good leader. He’s fought through some pain – he’s really been a bright spot for us. We’re fairly mature up front, but there’s a difference when he’s in there.”

• Ok – too much nicey-nice! What about Van Malone? Can you tell us if he’s going to SMU? “Would NEVER talk about personnel decisions with players or coaches at any time during the season. I don’t know what you want me to say.”

“You could tell me whether or not he’s been hired by SMU.” See previous statement…he just repeated it – verbatim. Icy!

• Does the fact that the team has played well against good teams give him confidence? “Well – some of the time. We’ve played other good teams and didn’t play very well. But, they’ve practiced well. Their attitude and enthusiasm’s been very good.”

• On the recent slow starts for the defense: “They need to play well early and I wish I had an answer for why that’s happened. We’d like for them to play well and start early so we’re not playing catch-up.”

“But, on the other side of that, there’s games that on offense we haven’t played very well early either.” Did he really have to say “early” there?

• This was a funny story about Bosworth. (Mike and Boz had “words” in Gundy’s freshman year.) “Last time I saw him was at a nighttime establishment in OKC back in the late 80’s.”

A nighttime establishment!  So – were you guys cool with each other? “Yeah – we’re fine. I don’t know what mode he was in – Brian or The Boz – at that time so I can’t really answer that question.”

• How does he deal with the annual coaching carousel – one which he’s not on, I assume?

“It’s just part of our job. For whatever reason, over the last 6-7 years people have just wanted to hire guys off our staff. I get calls starting in about mid-November. Very seldom do I get less than 3 guys somebody’s trying to hire.”

• There was then another refusal to discuss, followed by a discussion of TCU vs Baylor: “Think that falls into me commenting on personnel and coaches and jobs and quarterbacks. I mean, it’s a no-win situation for me.

“We live in a society today where the more you say, the more people shoot holes in it so you’re better off not saying anything. I have an opinion on it. But, I would not want to be on that committee. Both of these teams, in my opinion, could very well be, at this point, the top 3 teams in the country on any given day on a neutral field.”

Ok, that was kind of confusing, too.

• How important is it for the Big 12 to get a team in the Football Four? “Very important in recruiting.”

• Talked about why Glidden is getting more touches: “Yeah, he’s been consistent.”

• What’s most impressive? “He’s just doing his job. Playing good. He’s matured and the schemes seem to fit him.”

• Does he see similarities to Josh Cooper? “There are some, yes. Is he a junior now? So, he’s got one more year. And this has been the first year he’s been able to see a lot of reps and develop.”

• Carlton the Doorman asked (look it up, you under-40-somethings) if the last 2 Bedlam losses still frustrate him. “Every loss frustrates me. Every loss – whether by a point or 50 points – they’re hard to take…and they are frustrating.”

• On the offensive line: “Crabtree coming back helped our team.”

• Zac Veatch was “recruited to play tight end. He’s certainly undersized to be playing offensive line in this league.”

• “I’ve got like two minutes and I’ve got a meeting because it’s Tuesday, as much as I’d love to stay and chat.” Sorry, but I love that! I’m such a Gundy homer.

Uh-oh. That doesn’t sound real good now does it?

• So, does that hang over him – burden him? “No. You guys have been around here forever. We agree to disagree on some things. But, they came in and combed this place for 12 months and that’s all they found? We oughta be throwing a party. You can write it any way you want – that’s my opinion.”

Sound like Coach Mike would like a little more credit from the powers-that-be for cleaning up Lester’s mess.

• To close – a question about how new coaches settle into their roles: “When we lose a coach, the guy that comes in takes over for the guy that left.” Good plan!