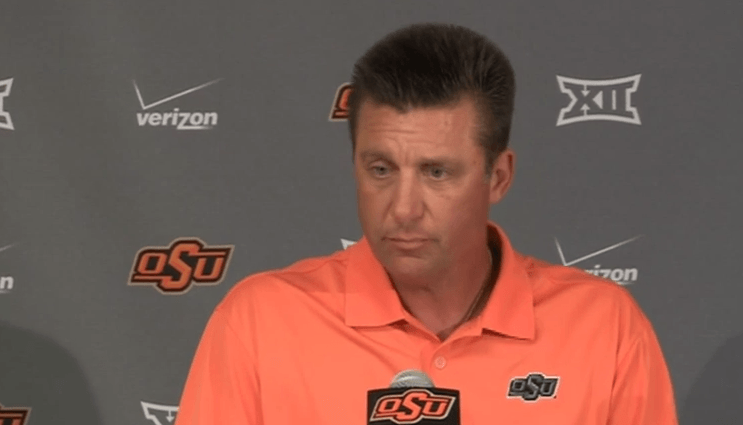 Coach is back at it with a relatively short press conference where he talks WRs, young DBs, weather, and Daxx – he’s nifty, but he’s no Choo-Choo!

• A reporter commented on Jimmy Bean’s performance – “He came to us under-sized, showed great work ethic in the weight room. He has a great attitude. Could maybe play beyond college.”

• Does anyone else hear the old David Essex song every time you hear “Jimmy Bean”? “See her shake on the movie screen, Jimmy Dean. James Dean. Rock on…”

• Coach was asked about Des Roland’s comments about the OL playing a lot better against Tech. Did he see that after watching film? “Not really. I’d say that’s a stretch. I think Des was just being nice.”

• Said they “just need experience. But, they are improving.”

• Does the new coach (Bob Connelly) have any impact? “Not a factor at all. Bob’s done a good job with them.” Yet another cool thing about Gundy – he backs his coaches!

• Coach discussed how wind is the primary weather factor in this part of the country. “Last year we had two cold football games, and it didn’t really affect us throwing the football.” Uh, I don’t think so. Check this out if you need a refresher. CHOO-CHOO

• On Daxx: “He throws a fairly accurate deep ball.” (I left “accurate” alone!!) But he went on to say, “A lot passes don’t fall in that category. Iowa State is going to cause us to have to throw more intermediate passes.”

• Later he was asked if Daxx is underrated as a scrambler. “Not really. He’s not very good.” No comment. It stands alone.

• Then Coach took the time to break down Garman’s rushing touchdown: “There was nobody out there and he ran it in the end zone.”

• This was great: “I think he’ll be nifty enough to scramble for 4, 5, or 6 yards.” Comparing to Clint Chelf: “I hope Daxx turns out that way, but he’s not on that path at this time.”

• About him running more: “I don’t want to see him do it a lot. He needs to learn to avoid contact unless he’s in position to get a first down or a touchdown. His strength is he understands our offense and he has the ability to throw the ball accurately down the field.” (Again with the “accurately”!)

• Addressing the increased use of the TEs: We’ve seen them “somewhat more, but not as much as I’d like, but we’re working them in. Seaton does a good job for us.”

• Regarding Blake Jarwin – “Some situations work for him. Others, it may be a reach to put him out there instead of, say, a Brandon Shepherd. But, he’s coming along, making some plays.”

• Talking about Marcel Ateman’s improvement: “He’s practiced much better over the last 2-3 weeks.” Said in the middle of last year his practice habits were “very average. If your practice habits are average, means you play average in games.” I can’t wait to see what October’s word is!

• Then this question: “Do you notice Mark Mangino’s presence at Iowa State?” And he gave a legit answer! How do you NOT make a joke there? He’s a better man than I am…“Notice his presence?! Of course!!!”

• Coach was asked about how he feels Tyreek is holding up physically, if this level of play is draining him. “Not so much that as it is everything we’re asking him to do, that could be draining him as much as anything. We’re trying to keep him fresh.”

• Says Tyreek has handled the physicality well. “I’ve always been concerned with a legitimate track guy playing football. He’s handled himself really well in that manner.”

• He had a great Gundy-esque answer to the question, “Are you more comfortable with the young guys (the DBs) being out there now than you were a week ago?”

“Not really.” P A U S E “They’re doing good. We’re getting something out of them, but I never feel comfortable with young defensive backs in the game.”

•  He was asked about Ramon (Richards). “He was a high school quarterback. We saw him as a Justin Gilbert-athleticism-type player.” (Wow!)

Went on to say, “His work habits are great. He’s ‘yes sir, no sir.’ He’s the type player we’re looking for. The type of person we’re looking for. He should develop in to a really good player here.” That’s cool to hear a coach say that about a young kid!

•  He said, “(Juwan) Offray plays and he’s a freshman. So one of them plays by default. It’s next guy in.” You gotta love that – and it’s apparent the players buy in to it!

•  Gave props to Kasey Dunn and Jason Ray for their eye for receiving talent. Said Dunn “liked James Washington from day one.”

• Finally, on the WRs: “They still drop too many passes. There were three they should’ve caught. But, they’re blocking well. They understand if they block well, we run well. If we run well, they get more passes.”

• Then, I think Jake Spavital’s brother was in the presser because there were several questions about Spavital’s career and grad assistants. Odd.