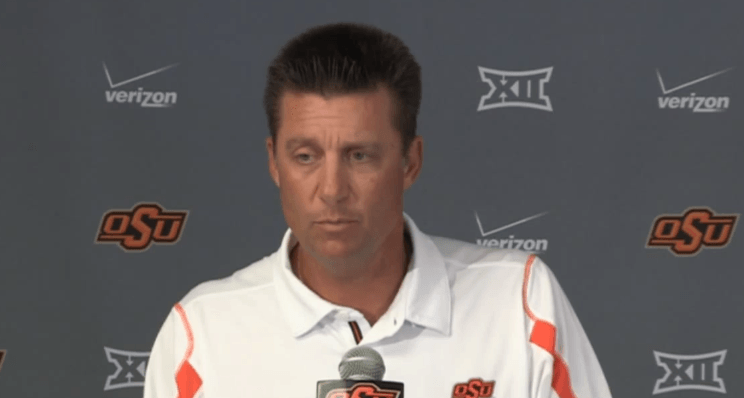 Coach had (not) much to say about Saturday’s ho-hum win over Missouri State but included some interesting quips on Daxx, Weeden (?), Larry Coker, Ben Grogan and where we go from here (i.e. “conference” play with UTSA).

• Coach Gundy came out with another summary statement like Saturday’s: “I wasn’t real fired up about how we played. It was a sign of an immature team.”

• Then he dealt with taking no questions about JW’s injury: “Should find out what’s going on about 6:00 tonight. We don’t think it’s as severe as we originally thought.”

• He went on to compare JW’s injury to Blackmon’s from 2010: “Blackmon’s injury was very similar. We thought he’d be out 4-6 weeks, and came back in two weeks to play against OU.”

• Regarding running QBs and injuries: “JW’s last injury occurred while he was in the pocket throwing the ball. He hasn’t run much in 4-5 quarters.”

• When asked if he thought there was a possibility Walsh could heal faster than a “normal human being”: “It wouldn’t surprise me.”[1. Cue Superman theme!]

• What was he most impressed with about Daxx? This glowing recommendation: “He was fine.” To be fair, Coach Gundy also threw out these classics: “Demeanor. Approach. Attitude. He brings a little different type of offense – style of offense to our team.”

Says Daxx’s future is “yet to be seen.”

• The good news on Daxx? “He’s taken a lot of reps and if he has to take the majority of the reps over this week, we expect him to get better.”

• Compared Daxx to Weeden: “They were both out of it for 4-5 years.” He also insinuated Weeden might have been something of a prankster.

• Discussing UTSA and Larry Coker: “We have our work cut out for us. Their pre-snap motion is a factor.”

• Also said “Coach Coker is a very special part of our family. He coached me and Cale at one time or another.”

• On speed of the OSU offense: Quarterback “better be, should be looking (at him on the sideline) in quicker than 5 seconds after the end of the play.”

• Somebody named Bill (I assume Haisten) asked several questions comparing Gundy’s first year with the guys kicked off the team to the Texas situation.

• Coach described our offense as a “hybrid of what’s gone on here the last few years.” Would that be the Holgokencich Model?[1. Ed. note: I’m stealing this.]

• Gave props (if you call it that) to Ben Grogan: “I have 100 percent confidence in him, He’s our best kicker. When we kick it, we’re going to send him out and he’s going to kick it.” Well, I feel better.

• Got this loaded question from someone: “Would you rather have a guy with a strong arm throw for 3000 yards or a guy who can run around and make plays?

His oh-so-Gundy answer? “I’d rather have a guy who can play in the NFL.”

• “Coach Gundy talked about Mason Rudolph a little bit. “His number of reps may change when JW’s boot comes off. But, he can function with the 1s. He has a bright future.”

• Finally (and very true) Coach Gundy said “Whether this team’s any good or not, that’s yet to be seen.”