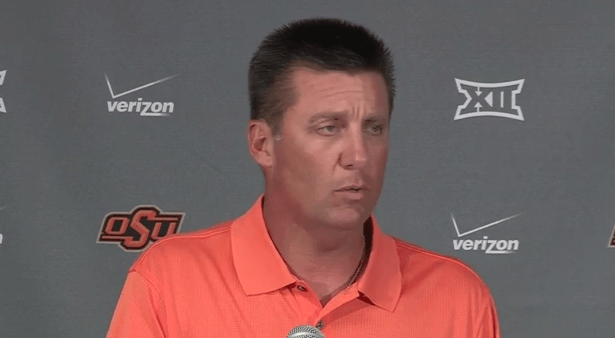 Monday is media day for OSU and Coach Gundy and guest writer Clint Davison will be covering Gundy’s press conferences for us this season. Here’s his first post (he gave great effort).

• “[We’ve] been here 10 years, so there’s a little bit of substance to us…we probably compete and play a little better than we should, just based on the continuity we’ve had here for a number of years…” I have to agree – Coach Gundy is building a system – however hard that is to define, it’s happening in Stillwater.

• When asked if he expected the defense to perform at this level – Gundy gave a great Gundy-ism – “didn’t have a clue.” No clue, really? Not surprising coming from the same Gundy that sat on the sidelines drawing up plays during the Mizzou game in ‘08!

• He was complimentary of the defense. “Two or three mental mistakes on small things really the difference…Am I pleased with their effort? Yes. But they have a long ways to go…”

• When asked how many players played every snap. He said “Six? Could be wrong…on offense, not more than 10.” What?!

• When asked how they were going to continue getting him the ball Gundy said: “We’re taking suggestions. Drop it in the box [outside the door].”

• This quote on Tyreek being the decoy on Glidden’s TD was great: “If you or I were running that direction, I’m not sure they’d be so fired up.”

• For the Daxx fans: “Daxx has taken a lot of reps; and I think he’s ready to play in a game. There wasn’t a time Saturday night, it benefitted our team for him to be in there.” Okay this was confusing.  It would have benefitted our team several times to complete the downfield pass!

• He had some stunning things to say about Emmanuel Ogbah: “[I was] very confident he would play well. Could be the best here, the ball’s in his court.”

• When asked who to compare Ogbah to at OSU he dropped this gem: “Who’s the best one ever…?”

• On the receivers Gundy said “[they] have to catch the ball better at the receiver position.” Had the one to Seales been hauled in and it may have been a night for Gundy crazy arms up and down the Strip in Stilly!