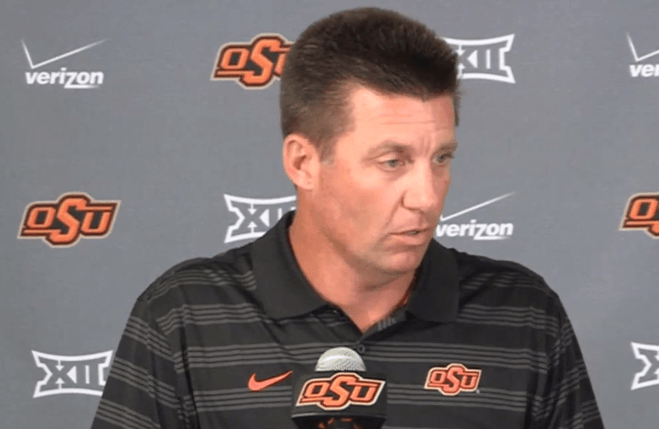 Coach shares a lengthy presser and talks about the TCU butt-kickin’, West Virginia, our QB situation, the “guy that plays for the Jets,” not panicking, new math, some science and his lack of anybody to hang out with!

• Coach’s opening thoughts on playing West Virginia: “They’re another team playing real well right now. Quarterback’s matured, he’s playing with confidence – considerably better than he was 8-10 games ago. They’ve got a receiver who’s going to play the game for a long time, and their defense is playing with some attitude and confidence.” None of which bodes well.

• He was asked about his relationship with Holgorsen: “I let coordinators set their own hours and approach. Dana, for a lot of reasons, was different than a lot of our coaches. He had a different schedule, but he was productive.”

I’m just going to let you all enter your own comments here.

“We don’t cross paths much…but when we do we talk and laugh; but, I don’t hang out with anybody anyway.” Positive: the talking and the laughter. Negative: no friends. I’d hang out with Coach…wouldn’t you?

• On facing the ‘Eers offense and their big plays: “Every offense (in the Big 12) is built on big plays. But, when ‘the guy that plays for the Jets’ was there, the big plays aren’t what they are now.

• “We can win the game Saturday; we just have to minimize No. 11 and their big plays. We have to find a way to present some issues for their quarterback. Then, offensively, I know you guys are tired of hearing it, but we’ve got to run the ball effectively. Then, when we have to throw it, we have to be at least 40% on our passes.”

• Coach then continued with a pretty cool analysis of how he (they) look at “real” passing downs: “In a real passing situation, in my opinion, we’ve been below 15 percent. It’s hard to win a game that way.” He was asked to explain a “real” passing situation: “When they know you’re going to throw it. 3rd and whatever…with us now I’m not sure what that parameter is. We need to be around 40 percent to have success.”

• “When we were good around here we were 40. Even when we were average around here on offense we’ve been over 35. We need those percentages. That’s why we have young coaches that are smart and good at math.”

• Then there was this mathematical discussion as a nice interlude. He was asked if he was a math whiz. “No. I can add pretty good, but when you get into those u’s and f’s and those funny looking signs – it’s not good for me.”

• It continued with a question about opening up the playbook: “It’s kinda like algebra. We’re trying to figure out the first formula to get to the next one. If we can improve on the basics, it will allow the quarterback to play better and open up some more plays for our team.”

• Talking more about Daxx: “He played ok. We didn’t give him much of a chance…we blocked better; but, we need to protect him better. Couple of throws he made I wasn’t fired up about. I’m not trying to defend anybody here, but if we don’t run the ball better than we did Saturday and don’t protect, it’s hard for him to operate.”

• He then went on to evaluate the horribleness that was the “football game” we played in Ft. Worth Saturday. Coach was asked when he realized it just wasn’t our day: “If we could’ve scored to make it 21-13, we would’ve saved ourselves a lot of misery…if we’d have been able to function.”

• On explaining the TCU perspective of play-calling: “Once it got to 28-9, Doug” (Meacham – the TCU OC we skipped over for Legos, in case you didn’t know) didn’t have to be “cautious with his play calls. Got to the middle of the 2nd quarter and for the rest of the game, he could call whatever he wanted because they didn’t have any fear of us scoring.”

• “For them, they said, ‘They can’t move it, they’re not scoring, call whatever you want. Spread it on out, open it up and let the floodgates go.’ That’s the way I felt.” Brought to you by @pistolsguy’s Twitter feed from Saturday – – perfect!

• But – Gundy’s response: “For me, I’m so naïve to think we could’ve gotten back into it at some point. Get a turnover, get a touchdown on one drive, then you make up 14 points and it gets to be a one score game.”

• More on Gundy’s reaction to the nastiness that was Saturday: “That’s just the kind of day it was – we got our butt kicked. We haven’t had one of those in a long time around here…But our team’s fine. They’ll practice good this week and they’ll play hard Saturday.”

• Can I just say, it appears Coach really likes this team? That’s big for the guys playing now, but huge for recruiting. Mike is the consummate “player’s coach.”

• Gundy going all third-person: “I don’t mind losing games. I don’t like it, but I like when there’s fight and there’s a reason for it. I don’t like when we give a game away. We didn’t give the game away Saturday; they just kicked our butts…We’ve got a lot of work to do; but, we’ve got players willing to do it. Coaches are fine. Coach Gundy’s fine.” Great Gundy-ism!

• Giving some good thoughts on the defense and leadership: “They’re smaller in numbers (leaders) but if the defense would’ve quit Saturday, they’d have hung 70 on us because we couldn’t keep their offense off the field. They couldn’t hardly get their helmets off and get a drink and they were back on the field.”

• “The only way to prevent that (the defense being exposed) is to find some stability on offense and limit the big plays on defense.”

• On Ashton Lampkin coming back: “I’m 50/50, but hopeful.” If he comes back, “he makes No. 18 (Richards) better because he only has to play 30+ plays. Automatically makes him better because he gets to rest a little bit.”

• Asked what the DB’s can take away from this game: “Ramon, No. 18, needs to stay up and inside of the guy on man-coverage so he doesn’t get beat inside. And Sterns needs to get deeper and break off the hash quicker so he can intercept that ball.” You mean the one that hit him in the face!!??!

• “They (the defense) were on the field the whole time, so it’s hard to even evaluate them outside the big plays…Our offense is exposing our defense.” Do you ever wonder if Spencer follows Yurcich home, sits down the street and just plans his…ultimate demise?? 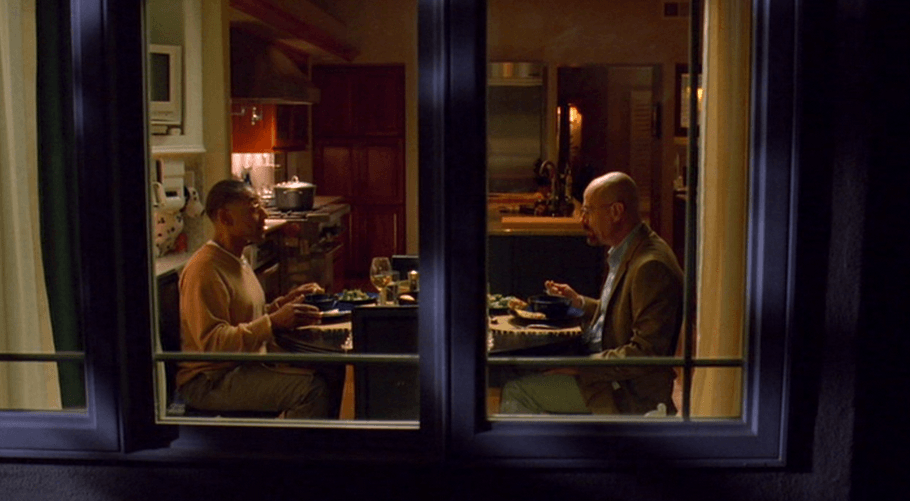 • Addressing the injury situation: “We need to get them back out there to give us some depth. We have a number of freshman playing over 70 plays per game.” (?!?!?!?) “And I have concerns about that. That’s the science part of what I believe in…So, we’re trying to modify the strain both mentally and physically, but, we’ve also got to get them ready.”

• On the BIZARRE situation with the OL, specifically on REDSHIRT, WALK-ON, Lundblade’s play: “He played ok. He did fine. He’s out there. He understood.” Sorry – but he kind of sounds like Nathan Thurm here. (See SNL, circa 1985). “He functioned. He worked hard. He’s a good kid. It’s important to him. He’s out there fighting. He should be a good player here.”

• “We don’t usually ask a young man to play until he’s a redshirt sophomore. There’s a very limited number of players who can come out (of high school) and play at this level.”

• On the QB sitch – with JW hurt, Daxx being…and Rudolph keeping the redshirt – Coach was asked if there’s any chance JW will be available again this season: “I don’t think he will be. I don’t think he can come back…he gets out of his cast this week, but I don’t think he’ll be back.”

• On Daxx: “There isn’t any reason right now to say we need to replace the quarterback. We’ve got issues and it’s not just him. He’s played ok for where he’s at in his career.”

• About Mason’s reps in practice: “He’s getting the maximum number of snaps he can get without playing in a game…and more.” What? The maximum…and more?!

• Coach was asked (again) about the parity in the Big 12: “I don’t know if anybody would want to take a venture at who’s going to win it…it’s great for college football, great for the fans, for the media, but it’s terrible for coaches. I think it’s going to be this way for a long time…Oklahoma State’s still hanging in there! I mean, we’re not out of it! The difficult part for me is we’re not used to losing 42-9.” I hope it’s terrible for a particular coach!

• When asked if looking at the future helps him cope with…what’s going on now: “You guys are all being so nice to me. Nobody wants to win more than me…I love these kids. When you look out there and see a lot of guys that are freshmen and sophomores, you’re like, ‘This is going to be fun in the future.’ But I’m not frustrated. I’m disappointed for our players.” Again, this is what I love about Gundy! He seems to be concerned about the well-being of the players. Very cool!

• Talking about looking toward bowl eligibility: “That’s something everybody else does for us. We have our hand full with just the next game. We can’t even begin to look past West Virginia. Everybody we’re playing from here on out is pretty stinkin’ good!”

• Finally, Coach was asked about his 1st Homecoming compared to now: “Yeah, my first was like 15-18 thousand. Now it’s like 30-35 thousand. It’s awesome for college football. It’s a neat night. And, it’s going to be great weather – 72 degrees, 8-10 mile per hour winds.” There he goes again!