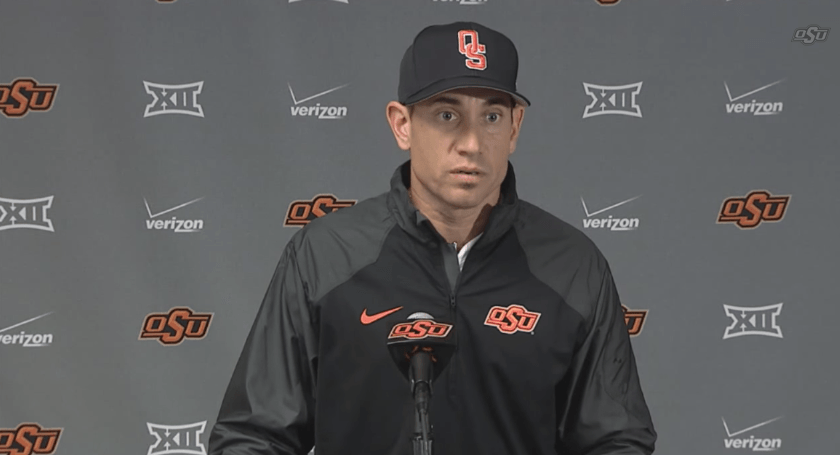 Coach Gundy and his staff came out today to give us a little insight into what to expect when we hit the gridiron come August. Gundy sent out the new guys first.

To assess those I know nothing about, I’ll do what we all do best – I’ll make some generalizations and assumptions about the new assistants.

I’ll base them on, obviously, what movie I would assume is each coach’s favorite based on their first presser. Then I’ll give my personal overall impressions.

The assistants lead off the video here (thoughts below)…

• “The most important thing to me is getting to know the players – learn the guys.”

• “I can’t imagine a recruit coming here and wanting to go anywhere else.”

• He told a great story about being the ball boy at several Holiday Bowl games (including ours with Barry?). But, the best story was about tearing off Corso’s headset when he coached Indiana and asking him about it years later.

• Overall impression: solid guy who wants to make the best of his role here. I’m happy.

• Favorite movie – “Fishing With Roland Martin – The Movie” – I don’t know if this really exists, but if it does, this guy owns it. By that I mean, I love this guy!

• Spent 13 years under HCs who coached OLs – deals well with pressure from HC. Coached under Phil Fulmer among others.

• “I’m ultimately in charge of putting the five best guys on the field at their position no matter what they did last year or in Jr. College, or high school.” Love that!

• Favorite movie – Either “Rocky IV” or “Tombstone” – seems very much a central OK-type guy. He’s ready to take what’s offered and make the best of it – a “go for it” type of guy.

• When asked about the difficulty of leaving Montana St. – “It was easy. It just felt like the right fit. We loved Stillwater.” Said his wife is a “rodeo gal” and family is “agricultural type.”

• “Any time you can go from the Big Sky to the Big 12, thumbs up on that one.” While waiting for the second “do-you-want-the-job” call from Gundy – “I had the Jeopardy theme going through my head.” So, that’s something…

• About TEs in the OSU system – “We have our own meeting room now. We need to build an identity.”

• Favorite movie – Something intense and dramatic…“Saving Private Ryan” or “Apocalypse Now” – he’s a seriously focused guy! (Even though he looks all of 18!!)

• His connection to Stilly? Coached with Monken. Love him already.

• He kind of dodged the Tampa Bay question – “Not going to go too deep on that place. I’m super-focused on this place.”

• Tramel with the almost-challenging question about Arroyo bringing up Bob Fenimore: “You gotta know what’s gone on before you.”