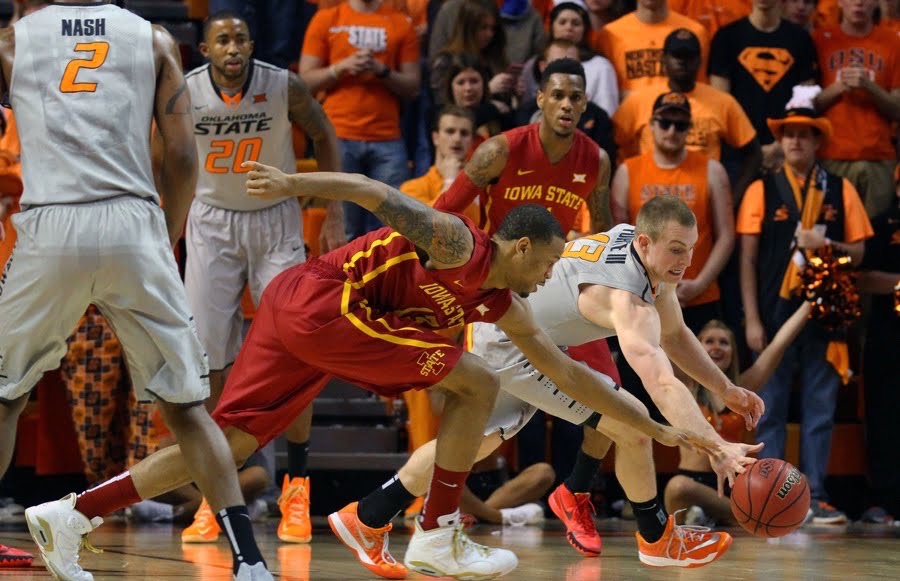 Phil Forte wrestles for a ball against No. 14 Iowa State. (USATSI)

For the second straight game Oklahoma State played the last few minutes like it was thinking about which Stillwater Braum’s to hit up after the festivities were over.

This team has seemed to have forgotten what to do in the waning moments of a close game — or maybe it never knew to begin with.

OSU led 65-61 with just over two minutes left before being outscored 9-0 by the Cyclones and falling for this second time this season, this time by the score of 70-65.

The ending hinged on a strange Le’Bryan Nash play just after a Dustin Hogue 3 made it 66-65 with 80 seconds left.

Nash drove the lane, got to within about five feet of the bucket, looked around, saw nobody in front of him and…tried to pass to Michael Cobbins on the baseline but traveled instead?

Nobody could stop Nash down the stretch (have we established that yet?) and yet he was trying to find what is probably OSU’s fifth option on offense with 50 seconds left?

What was that all about?

It was a fitting ending to what was not a great overall game for No. 2. He missed his first seven shots and ended up combining with Phil Forte to go 7/24 from the field.

The bummer is that, for once, the rest of the OSU team actually picked up the pieces.

Jeff Newberry had his fourth-straight double digit performance as he hit 2/3 from 3 and had 13 points. Anthony Hickey threw crooked numbers all over the box score and ended up netting 12 points as well.

It was also just the second time this season OSU has shot better than 30 percent from 3 and lost (both to Iowa State…of course).

I smelled trouble at halftime when the Cowboys and Cyclones were tied at 33 after OSU had just hit six of its first 10 from deep.

The problem this game was that Iowa State got just six fewer offensive rebounds than OSU got defensive boards. To put that another way, of the 42 rebounds that were available when ISU missed a shot, OSU only got 57 percent of them.

Travis Ford: "We just got annihiliated on the glass." #OKState

This led to 14 more shots for Iowa State than OSU took and, well, you could have played this thing in Eddie Sutton’s living room and a top 15 team is ultimately going to take advantage of that.

This isn’t an awful loss — Iowa State is a dang good team — but it’s a rough one, especially in GIA with the credit OSU had been building up on the road.

I’m not sure why there was NIT chatter on Twitter after this one (because Twitter is usually a bastion of rationale), but barring an absolute disaster in the next four games (like, losing all of them), the Pokes are safely in.

Would it have been nice to beat Iowa State at home? Absolutely, but this was the one toss up of the final five and it came down to the wire (which, considering the opponent, I know is shocking).

This isn’t a season killer by any means but it did shine a bright light on a big problem. OSU has to learn how to shut it down at the end of tight games.

Because right now it has no clue how to do that.

• Niang got his fourth foul with 12 minutes left and didn’t come back until there were three minutes left. He managed to score four of Iowa State’s final nine points. I wonder how many coaches would have sat their leading scorer for that long.

• I just have to say the last call on Dustin Hogue was comical. He basically grabbed the ball and then fell down and Solomon fell next to him and the refs reacted like he’d stabbed young Mitchell.

• Is it more bizarre that OSU only has four games left[1. Okay, six.] or that it hasn’t played West Virginia yet? I looked up today and thought “wait, only four regular season games after tonight?!” It feels like we were just house Texas Pan-American Central last week.

• Outside of Markel with space on a fast break, I implore you to find me a repeatable moment more exciting than Phil Forte catching the ball 30 feet away with nobody on him.

• Anthony Hickey was made for March. He’s like three One Shining Moment moments waiting to happen right now. Don’t screw this up, Travis.

• Good producing by ESPN when one of its announcers was talking about Forte being a liability on defense as a graphic flashed showing that he’s the Big 12 leader in steals.

• I know we like to whine and moan but a No. 22 OSU playing a No. 14 Iowa State in mid-February in GIA is pretty cool.

• Mitch got a couple of cheapies in the first half but he had one pass that was amazing. He flipped the offense to the other side of the court (has Cobbins ever done this?) and Newberry hit a fake-pass three. It was pretty sweet.

• Speaking of…if you had Mitch Solomon as a spark for OSU in conference play, please raise your hand. Mr. and Mrs. Solomon, please put your hands down. Anyone else?

• Big 12 refs don’t love any call as much as they love the hip-check foul on a screen 290 feet from the bucket.

• I just don’t understand Cobbins’ lack of awareness on offense — Hickey ran a sweet little pick-and-roll with him in the second half and as Hickey threw the oop, Cobbins was still standing at the free throw line.

• The oop from Nash to Cobbins in the second half was a jewel. I wonder if Travis Ford said a cuss word or not. Maybe just in his head?

• Going to leave this right here.

• Good on ESPN for showing all 49 ways Iowa State has figured out how to rip OSU’s heart out in the last six years in hoops. Could they not condense a 2011 football highlight package while they were at it?

• I was texting my dad about Nash in the second half. It ended like this: “This is Nash’s 120th game as a Cowboy, how have we not figured out what he’s about yet?”

• Nash should have been going at Jameel McKay all night to try and get him into foul trouble. He was (obviously) an issue with 17 points, 14 boards and four blocks.

• Six bench points tonight. And with the way this bench has been playing, it felt like 60.

Next game: Home against WVU on Saturday