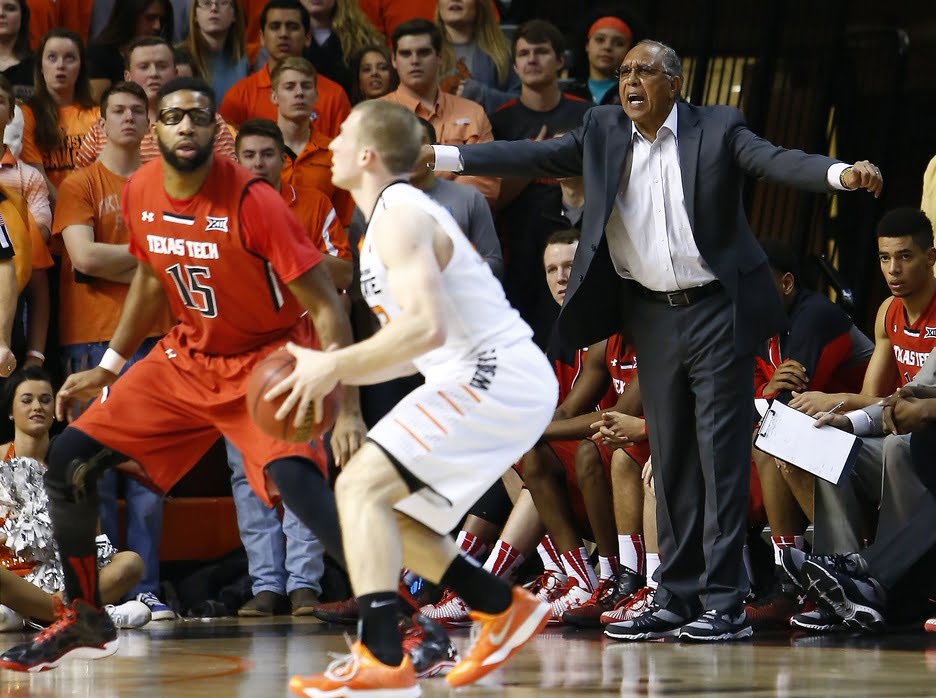 Oklahoma State turned up the heat in the second half after a pretty tepid first half against Texas Tech on Wednesday which is to say Oklahoma State did what it always does.

After being tied 25-25 with a few minutes left in the first the Cowboys went on a 38-18 run the rest of the way and buried the Red Raiders 63-43 in Gallagher-Iba Arena.

Le’Bryan Nash had 12 of his 16 points after the break (shocking) after picking up a couple of fouls early on and looked unstoppable for stretches.

Phil Forte poured in 15 points on 5/7 shooting from 3-point range including a bomb in the first half in which ESPN’s camera struggled to keep him in the frame.

The two lines that were most interesting, though, belonged to Michael Cobbins and Jeff Newberry.

Cobbins has been downright egregious since conference play picked up but he posted 7 points, 8 rebounds, 2 steals and 5 blocks and Newberry tossed in a nice little 13-6-3-1-1 line.

OSU also held Tech without a field goal for 10 minutes in the second half.

To be fair, I think Nate, myself and three other random readers could probably hold Tech without a field goal for at least three minutes. But still, the run from OSU was nice to see.

Texas Tech is awful, yes. This game was unwatchable at times, nobody is arguing that. But it was good to see OSU take care of business late coming off that game in Norman.

Going slow (or in tonight’s case going fast and then falling off a cliff midway through the first half) and being tied 25-all is fine against a putrid Red Raiders squad, but that won’t fly on Saturday morning in Manhattan or when Baylor comes to Stillwater next Tuesday.

We saw it in Norman, we saw it in Lawrence and we saw it again tonight. They’ve been largely good in the second halves of games but the first halves have been, to be kind, spotty.

Travis Ford’s team has shown too many signs for me to start handing out free passes at this point. This should be a tournament team and they have to figure out a way to get No. 2 engaged in the first 20 minutes if they’re serious about that.

He checks out early (or gets in foul trouble) and they just dawdle around like the score gets reset when they go into the locker room. It’s inexplicable to me why this happens, but I have no choice but to point back at Ford and wonder what the issue is.

The wins are nice — the way this team has been starting games recently is not.

• Have you ever thought a Forte 3 attempt wasn’t going in? I was thinking about that tonight. I don’t think I have.

• Would you rather have Cobbins or Nash bring the ball up every time down the floor? Or Soucek? I think I would probably pick Cobbins.

• Ford should always wear tennis shoes like he was tonight on the sidelines for Coaches vs. Cancer. It’s fitting for him. I don’t really know why.

• Full disclosure on tonight: I was involved in a high-stakes (for me) fantasy golf draft[1. Is there anything whiter than a fantasy golf draft?] so I drifted in and out of this game. I was the Le’Bryan of bloggers tonight to be more specific.

• I thought Hammonds was pretty good tonight after playing well in Norman. I’m still not sure why Ford said he was the strongest dude on the team as if that was a good thing.

• I’m a big fan of Tyree Griffin’s underhisrt. It’s almost a 3/4 sleeve shirt in that it touches his elbows and sometimes beyond. It looks comfy.

• Can we make a “you have to score 35 points in conference games before you can taunt people” rule or no?

• Does Forte work hard? I was not aware if he was a committed student-athlete at an agriculturally-based school in northeast Oklahoma.

• Nash is the Tim Duncan of not getting calls on fast-break layups. I thought Ford was going to hoist him over his head and run him back on defense at one point.

• Jeff Newberry can go a little bit (as we already knew). I want to see this agains a team that isn’t Tech but I think he can ball.

• On the flip side of that spectrum — it makes no sense to me why Jeffrey Carroll isn’t better than he is. You watch him and you’re like “man — looks super athletic on defense, has a great shot, spaces the floor…what gives?!”

Next game: Saturday against Kansas State