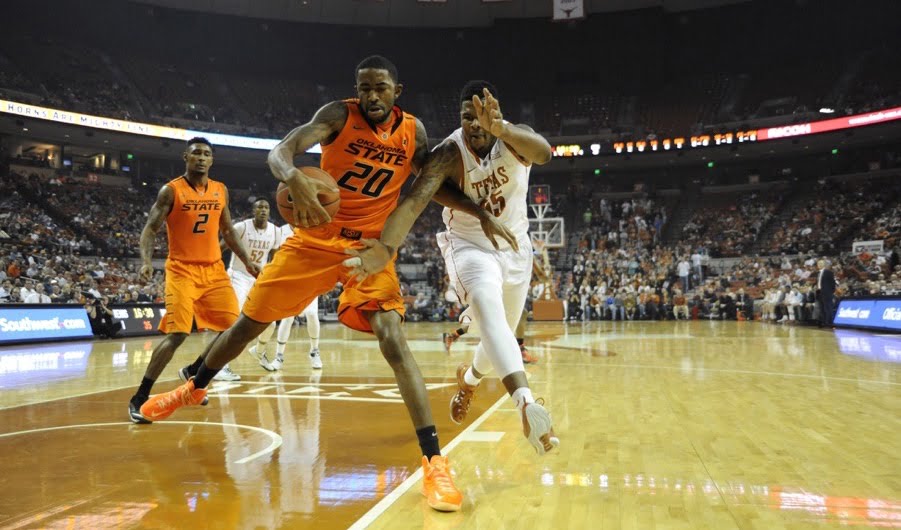 Michael Cobbins battles for a rebound against Texas in Austin. (USATSI)

For 38 minutes in Austin on Wednesday Oklahoma State largely did what it wanted against Texas. The Cowboys played tremendous defense and forced the stumbling Longhorns into some mind-bogglingly bad play on offense, especially at the guard position.

Then at the end of the game Isaiah Taylor went wild on Anthony Hickey — I kept the game on the Longhorn Network for the postgame and yes, A.J. Abrams was evaluating a chalk outline of Hickey’s body — and erased a lead OSU had held since the 17:58 mark in the first half.

With just three seconds left, though, Taylor missed the first free throw of a one-and-one that probably would have ended the game and we were suddenly sent to overtime where Le’Bryan Nash won it for the Cowboys even though it felt like the contest should have never gotten that far.

No. 2 scored six of OSU’s nine points in the extra session and OSU prevailed 65-63 in a game that didn’t look as if either team had ever been ranked, much less both of them ranked as recently as January (and Texas still!)

Phil Forte had a tough shooting night (3/13 from the field) but still had 14 points because he got to the line eight times.

Actually Forte and Nash combined to go 9/32 from the field while the rest of the team went 11/20[1. What is this brave new world we’re living in?] and really pushed a halftime lead that could have been more given that Texas coughed it up 12 times in the first 20 minutes.

Oh and I guess I should mention at some point that Le’Bryan Nash tried to end Demarcus Holland’s life with this dunk in the second half:

The win for OSU means it has gained back the home court advantage it lost against OU last weekend if we presume that holding serve at home means a punched ticket to the NCAA Tournament (and I do).

We can sit here and talk about how Travis Ford has now won just three conference road games in the last 23 months if you want (and I know a lot of you do) or we can talk about how important this win was for OSU’s season and forthcoming bubble hopes.

Part of a team’s success in both college basketball and football is catching teams at the right time of the season and this was a great time to catch Texas on the road.

I was impressed, not necessarily by the quality of play from OSU, but by how willingly it put itself through the wringer after getting its heart pricked in a Bedlam sweep just four days ago.

There was a point in the second half when Anthony Hickey swiped the ball away from Isaiah Taylor and comically tried to dive on top of it from behind Taylor — the Japanese judge gave him a 5.1 on the landing.

That effort is sort of a microcosm for this OSU squad, though. Critically out-manned in certain areas and some of the plays leave you shaking your head, but they won’t ever let you say they’ve given up on the year.

Sometimes that’s all that matters.

More thoughts and notes on the game…

• Seriously, Le’Bryan tried to burn down the state of Texas. Also, the Anthony Allen reaction in that video is epic.

• The announcers were so preposterous it’s almost not worth discussing. I’m pretty sure the color commentator was rocking a T.J. Ford jersey under his suit.

Of all the ridiculous things they said (and my gosh, there were a lot of them) I thought trying to talk themselves into a charge being called on Nash during his dunk was the funniest.

• Texas’ 18 turnovers were only their fourth-most on the season. It felt like they had 81. Their guards handle the ball like my children eat food off their high chairs.

• Oh guess what, OSU was 50 percent on 3-pointers tonight. This stat needs updating:

• Speaking of announcing, A.J. Abrams was saying “we” on the postgame on the Longhorn Network. Do they always do this? (I never watch)

• Forte had a lousy shooting night but he got to the line when he needed to. Somebody on Twitter mentioned it but that’s a big difference between freshman Forte and junior Forte. OSU needed it badly too.

• Amilian tweeted this in overtime. I laughed.

• Texas couldn’t guard Nash late in the game. Nobody can guard Nash. Texas was desperately throwing Cameron Ridley (!) at him in the second half, much to the announcers’ chagrin.

• OSU has now won six of seven (!) against Texas overall.

• I’m convinced Le’Bryan is going to become the first player to ever travel without the ball.

• It was pretty nuts watching a man not only rise from the dead but hit four 3-pointers after doing so like Holland did.

• This is how OSU closed out the second half. It wasn’t good. It was prevent offense at its finest.

• How much will Cameron Ridley weigh when he stops playing basketball?

• This is true (unfortunately).

Texas has somehow forced OT in a game in which its only offense was Isaiah Taylor driving 1-on-5 or DeMarcus Holland sinking unlikely 3s.

• I thought Hickey’s end-of-regulation shot was in. That would have made up for what Iowa State did to us in Ames last season.

• Speaking of Hickey…he was great and all (especially on defense) but it’s tough that Ford has to take him out at the end of games because he shoots 40 percent from the line.

• Newberry and Shine are really smart basketball players. They always know where to be and do sneaky stuff all the time (I feel like I type this every game).

• I was thinking about this: What would the score had to have been at halftime for you to ralax in the second half? Serious question. A 30-point lead? More?

• I took this note before halftime: Why does Nash try to dunk on everyone?

• I don’t understand why Texas didn’t try to abuse us on the inside. With 11 seconds left in OT they went right to Myles Turner and it was so, so easy.

Plus with Cobbins in foul trouble they had Solomon and Hammonds defending them on the interior. Instead their guards were busy trying to corral pigs on the perimeter. Or that’s what it looked like.

• Where do I sign up for more Tyree Griffin?

• I can’t believe this counts as a win against a ranked team.

Javan Felix was told to stay away from crowds and loud noise, so he's on the bench at the Erwin Center.

Next game: Kansas in GIA on Saturday.