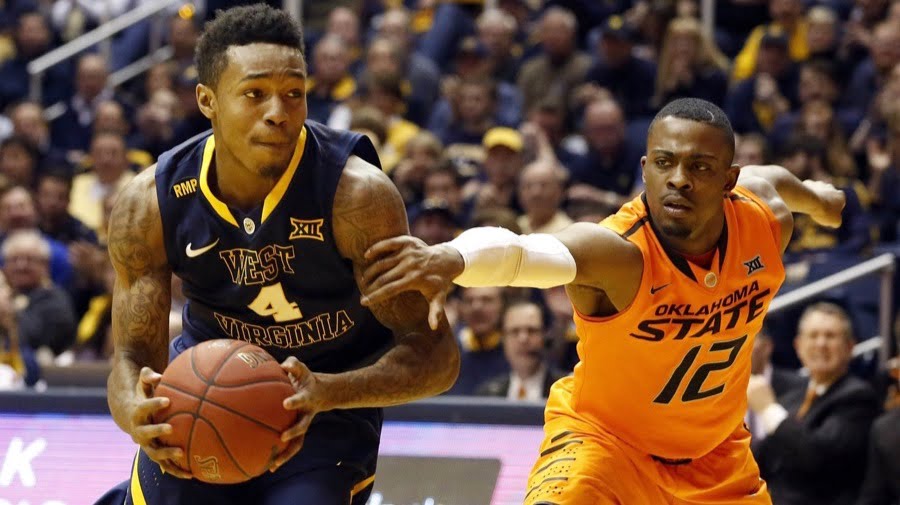 Anthony Hickey goes for a steal against West Virginia. (USATSI)

Oklahoma State had its second-best shooting performance of the season on Saturday in Morgantown and it wasn’t even close to enough to beat West Virginia in the Big 12 regular season finale.

The Pokes fell 81-72 and achieved something that few teams in the last five years can also lay claim to.

Here’s the comprehensive list of all the college basketball teams since 2010 that have done all those things and still lost:

It had only happened six other times in the last five seasons. Only three times in BCS conference games.

Well, OSU turned it over 15 times (five by Le’Bryan Nash) and only got to the line 11 times (zero in the first half). Oh and they apparently employed James Harden as a defensive consultant at some point during the week.

Jeff Newberry had the game of his career so far. He scored 23 on 8/11 shooting and tossed in two rebounds. Phil Forte bounced back from his woes with 13 points and three steals as well.

Offensively, OSU was fine. Great, even. Other than the turnovers. But they were the Autobahn on defense. Zero stops.

OSU concludes its conference season at 8-10 for the second straight year and now has to wait on the Kansas State-Texas game to see what seed it will have at the Big 12 Tournament.

If Kansas State beats Texas, OSU will have the No. 7 seed and play Texas Tech in the first round (revenge game!) If Texas wins, OSU will get the No. 6 seed and play either Baylor, Iowa State or OU in the second round.

I keep thinking this team has done enough to get in the NCAA Tournament but remember, if it loses its first Big 12 tournament game next week, that means it will have a 18-13 record overall.

Not many records like that get in the NCAA Tournament, though not many teams have had to run this Big 12 gauntlet.

The 1-5 slide to end the year was incredibly disappointing after Ford and Co. started out 7-5 and looked to be headed for a top five or top four finish. Here’s a look at how Ford’s teams have performed in conference play since he took over:

Still, I was encouraged by the way they played against West Virginia on Saturday. The 3s were flowing and everyone was moving on offense.

If they can just get Cobbins back in time for the Big 12 tournament to anchor that defense they shou— oh…yeah, I don’t know what the issue was.

All I know is that this is a team that won a bunch of games early in the year with lights out D. Combine that with the offensive production they got on Saturday against the Fightin’ Huggins’ and all will be well in the postseason.[1. In this case “all will be well” means they’ll win one or two more games…ceilings and such.]

• Nash was really cranking early on today. It was an oddity to watch him perform at that level in the first 20 minutes of a game.

• It’s weird to me that OSU hadn’t lost in Morgantown until now. It sure feels like WVU has been in the league for longer than it has.

• Keep getting those checks, Bobby Knight! Larceny must not be a crime in Connecticut because he is straight up stealing from ESPN. He announces as if he’s doing play-by-play but he’s actual the color guy. It was incredible to listen to. The over/under of guys he could name from that game if you called him on the phone right now is 2.5.

• Speaking of announcers, the actual play-by-play man called Mitch Solomon a “hard-working freshman” which is basically like saying “I have no clue. He’s tall and white and I know nothing about him.”

• The color-on-color unit matchup was sweet. I’m all for that all the time, especially in basketball. It might get a little weird in football because there’s more going on but it always looks sharp in hoops.

•We need a stopwatch on Forte’s release. It is preposterous. He found his rhythm again today which was good to see because OSU won’t win a single postseason game without him performing well.

• OSU only got three bench points.

• I wish we could have gotten good Newberry and good Forte for the same time this season. And something on defense that didn’t look exactly like a sieve.

• Is Christien Sager is our defensive specialist? That’s what he was called at the end of the game…

• WVU is going to be a monster out in the NCAA Tournament. They might not be disciplined (big surprise with Huggy Bear at the helm) but they’re pesky as hell and they can score. What they did today was impressive, despite OSU’s quest to set the sport back 25 years on defense, and they did it without their best player in Juwan Staten.