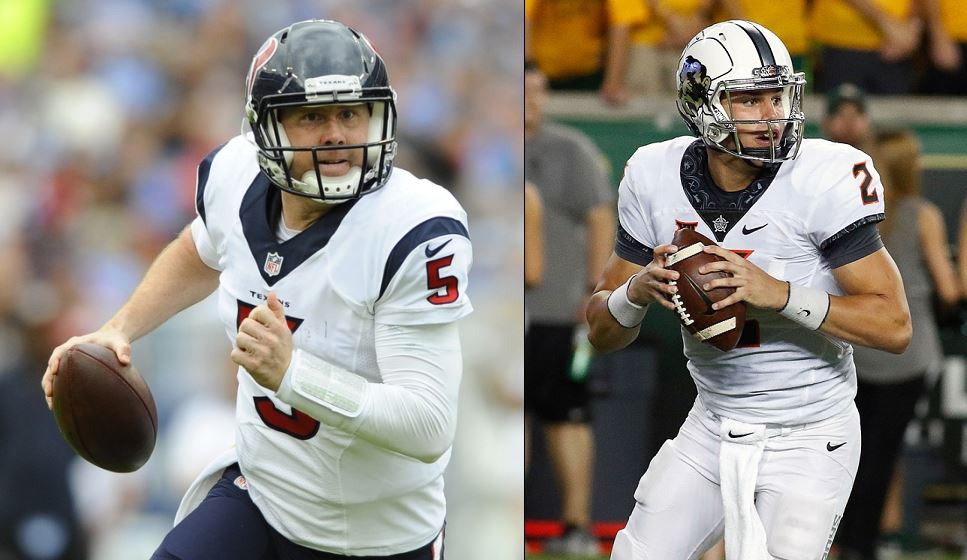 The comparison is not a new one. It’s just comes with the territory when you’re statistically the best two people to ever do something.

Since the first touchdown Mason Rudolph threw to David Glidden against Baylor in 2014, people began wondering if he could captain OSU back into an offensive juggernaut. And inevitably he began being measured against OSU’s greatest quarterback, Brandon Weeden.

Between the raining of confetti after Weeden’s come-back second half in the Fiesta Bowl and that rainy night in Waco, the Cowboys had four starters ride the quarterback carousel. Clint Chelf, J.W. Walsh, Wes Lunt, Chelf again, Walsh again, Daxx Garman. All lost their jobs either based on results or injury at one time or another. None seemed like the guy for any stretch of time.

A strong showing in Waco followed by Bedlam and bowl wins cemented Rudolph as a favorite in many OSU fans’ hearts. What he’s done since has cemented his place as one of the Cowboys’ two best quarterbacks — and he’s not done yet.

What Rudolph’s accomplished has been nothing short of extraordinary given his experience and the patchwork offensive line he had when he took over. After a 22-6 record as a starter and with an offense that has grown both behind and because of him, he’s poised to push for Cowboy QB supremacy and the record books in 2017.

Let’s take a look at how Rudolph and Weeden actually match up. Here are Weeden’s junior and senior seasons when he was “the guy” at OSU.

Here’s a look at Rudolph’s full seasons as the starter. I do need to add that J.W. Walsh took a lot of the snaps in short-yardage and goal-line situations in 2015 (60 to Rudolph’s 49 in the red zone) which put a dent in Mason’s touchdown count.

The numbers favor Weeden in scoring and completion percentage — and in the most important category, wins. But Rudolph’s not done and, sitting just 546 yards shy, could pass Weeden as the all-time passing leader by Week 3.

Rudolph has already overtaken Weeden with a couple records. His 540 passing yards against Pitts’ single coverage last year bested Weeden’s 502-yard game against Kansas in 2011. Of the top 10 passing games in Oklahoma State history, eight belong to these two, four each. The other two belong to Zac Robinson and Wes Lunt.

For a career, Rudolph already holds the lead for passing yards per game (300.5) and career interception avoidance (1.7 percent). I did a complete breakdown of Rudolph’s records and those he’s close to breaking earlier this year.

So what does the record-setting playcaller think about the comparison? Who’s his top OSU QB?

“That’s a tight one,” Rudolph told the Tulsa World during Big 12 Media Days. “I gotta pay homage to Zac Robinson. I gotta pay homage to my current head coach. Brandon Weeden, a Big 12 champion winner. There’s a lot of guys. I’ve been blessed to have such a great relationship with all three of those guys and to learn the history at Oklahoma State and to learn about their experiences and their ups and downs.

“There’s so many good ones. I’d say those three are really good ones and guys I’ve always tried to model myself after and compete to become better than.”

He was modest there but didn’t exactly exclude himself.

Where Mason ends up among Cowboy quarterbacks in the record books is a formality at this point. Where he ends up among Oklahoma State’s fanbase and in the court of public opinion, will depend on his on-field success this fall. Match Weeden’s Big 12 championship count (or better) and it’s more than a conversation.