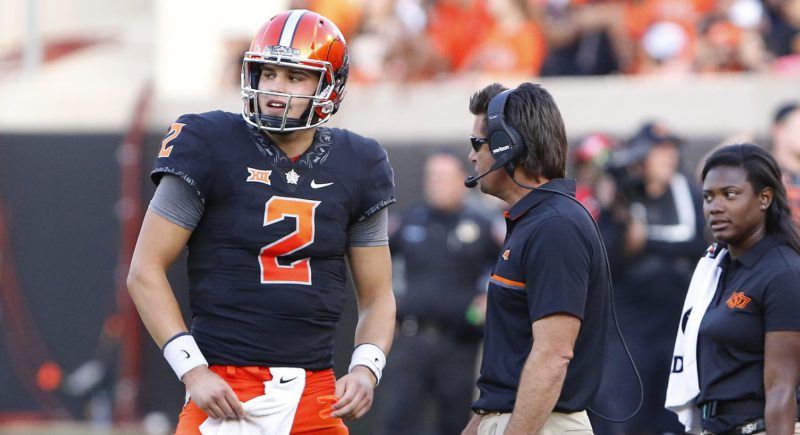 Rejoice, Oklahoma State fans. Mason Rudolph is coming back next year. It’s a huge deal. Add James Washington and the plethora of wide-receiver talent — and a finally-competent run game — and the offense could be set for an historic year.

Now that the season is over I think it’s a good time to look back on Rudolph’s record-setting year and pick out a front cover photo for Oklahoma State’s record book next year.

Related: I think the one at the top of the page will do nicely.

Let’s look at some of Rudolph’s records or soon-to-be records.

Another significant number is Rudolph’s TDs responsible for. This stat includes his passing and rushing touchdowns combined. At 62, he just passed J.W. Walsh and is now fourth on the all-time list at Oklahoma State and could very well finish his career atop this one as well.

With J.W. Walsh gone, it fell to Rudolph to handle the goal-line and short-yardage offense. He rushed for six touchdowns in 2016. Prior to this season, he had only one total rushing TD.

The all-time leader in total offense (passing and rushing yards combined) is Zac Robinson with 10,175 yards. Rudolph’s 8,707 yards of total offense — even while owning a net rushing total of -7 yards — is just 1,468 behind Zac and (again) has every chance to lead the list if he stays healthy next year.

Of course, that stat could change. But it’s not likely to dip too much with the Cowboys’ embarrassment of riches returning at wide out.

Most passing yards in a season? Rudolph now has the third and fourth best years.

Rudolph’s 4,091 yards came at the cost of just four (!) interceptions. That’s not talked about enough. The last FBS quarterback to exceed 4,000 passing yards without hitting a nickel in the INT column was Marcus Mariota — and it helped earn him a Heisman trophy.

The previous OSU single-season record for “interception avoidance” (the lowest percentage of pass attempts that are intercepted) was Aso Pogi’s 1.7 percent (five interceptions on 296 attempts ) back in 2001. Rudolph’s 0.9 percent this year (four interceptions in 448 attempts) tops that.

Donovan Woods held the same record for a career (five out of 219) for 2.3 percent. Rudolph (again) bested him with a career interception avoidance of 1.7 percent (17 of 958).

Last year, as a sophomore, Rudolph threw seven interceptions in his first six games.  He could force the issue at times.  But it’s important to remember that he started his sophomore season with only three games under his belt. It also didn’t help that literally no defensive coordinator was worried about OSU’s running game.

A two-pick game at Texas followed shortly by a rough showing in the overtime win at West Virginia had some of us concerned. But since that career-high three-pick outing in Morgantown, Rudolph has thrown just six total interceptions in 20 games.

Thanks to Rudolph, OSU is tied for fewest interceptions nationally with Western Michigan (who threw for 3,533 yards as a team) and Georgia Tech, who hasn’t attempted a pass since Halloween.

If Mason has a comparable senior season to his junior campaign he will be the all-time OSU leader in:

But the most important number of all is the one that shows up in that “W” column. How does Rudolph compare to other OSU greats? Rudolph is 22-6 as a starter. Brandon Weeden was 23-3 in his career starts. Mike Gundy saw 30 wins in this time as an OSU quarterback. If the Cowboys reach nine wins next year, Rudolph will beat his head coach out in that number as well.

So, while it may have had nothing to do with Rudolph’s reason for returning for his final year, being the greatest to ever do something is never a bad thing.