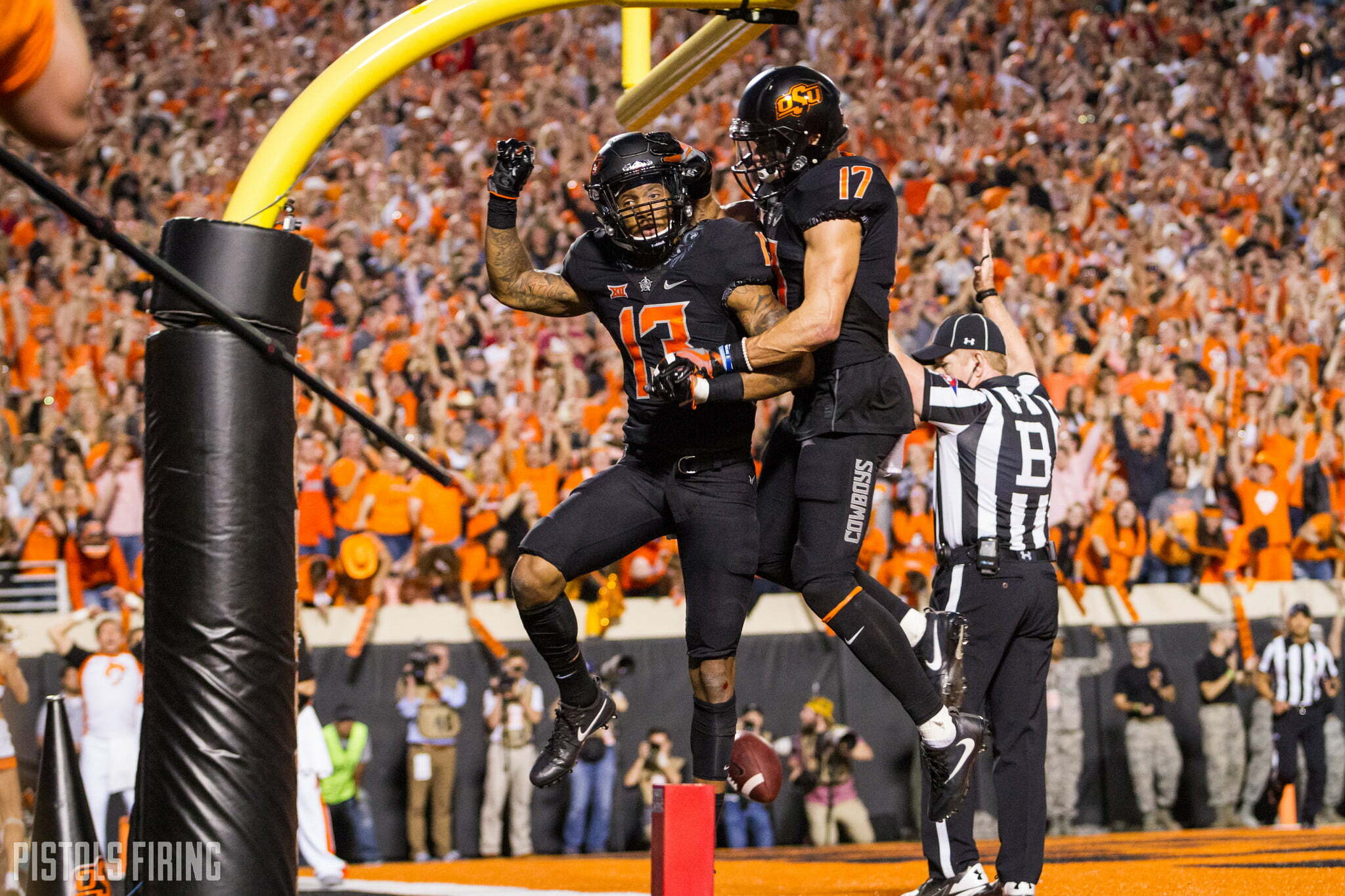 Believe it or not spring football starts next week. With one of the most talent-rich classes in OSU history moving on from Stillwater, there are plenty of holes to fill and plenty of questions to be answered about the 2018 season.

We’ve already previews the QBs and the RBs, let’s take a look at the wide receiver group.

Even after saying goodbye to its first duo of 1,000-yard receivers in James Washington and Marcell Ateman, and watching Chris Lacy turn some heads during the NFL Scouting Combine, Oklahoma State returns a ton of talent and depth at wide out.

The question for this spring (and into the fall) will be which of these former role players will take over as the Nos. 1 and 2 options for whoever is slinging the rock for the Cowboys.

Here’s a look at the wide receivers currently listed on OSU’s spring roster.

Not Yet On Campus

Both high school seniors have upside to spare, especially Moore, the No. 27 WR in the class according to 247Sports. Whether or not they see immediate reps will be decided in fall camp. While both could definitely benefit from an extra year in the training room (especially Moore), Mike Gundy has shown he’s not afraid to play true freshmen if he thinks they can make a splash.

Who has the most to prove: Tyron Johnson

With James Washington gone there are no more excuses for an MIA Tyron Johnson, right? The former five-star recruit has been in the system for two years and still has two years of eligibility left. While his spotty production (and reps) became puzzling last season, I think we can learn the most from last year’s Bedlam game.

When Washington left the game due to an ankle injury, Johnson took his spot at Z receiver and showed exactly what type of game-changer he can be — and almost became an OSU legend. He hauled in four catches for a career-high 118 yards and 2 TDs. And he was in position for a possible Bedlam kill shot down the right sideline.

Despite the questions (or question) at QB heading into the spring, everything appears set for a bag year for Tyron. Anything less would be a disappointment.

Who Leads the Team in Catches: Dillon Stoner

Stoner is my pick for leader in receptions just because I think he will be moved around the field. He may be the Cowboys’ most versatile weapon on offense. He’s sure to share reps at the slot with Jalen McCleskey, but has the size to play almost anywhere. I’d be surprised if we don’t see a Tyron-Stoner-McCleskey lineup on a frequent basis.

Stoner is an athletic freak and OSU’s most sure-handed receiver. Last year, he hauled in an impressive 44 of his 57 targets for a  team-leading 77.2-percent catch rate. And he averaged a TD approximately every seven grabs. With a lot more breathing room at the top of the WR depth chart, expect Stoner’s production to explode as a sophomore this fall.

The Cowboys said goodbye to a couple of their bigger targets in Marcell Ateman and Chris Lacy. It will be very interesting to see who Mike & Mike turn to to try and fill that hole.

There are really just three choices, but none have played a single snap of Div. I ball.

Patrick McKaufman — The 6-foot-6, 190-pound junior college transfer came over mid-year junior college transfer from NEO has been with the team for several months now and was even listed on the roster ahead of the Camping World Bowl. But he is technically part of the 2018 signing class and has three years of eligibility remaining.

C.J. Moore — The highly-touted incoming freshman will report this summer but he’s got the talent and upside to be a star in Stillwater.

LC Greenwood — Greenwood spent a redshirt season adding 15 pounds of muscle to his 6-3 frame. The big-play receiver was clocked at a 4.43 40 in high school and has ball skills to boot. He could develop into a lethal red-zone weapon.

With so much of last year’s receiver production having just taken part in the NFL Combine, there will be plenty or reps and catches to fight for among a young group. And there are plenty of talented candidates thanks to the eye and sales pitch of receivers coach Kasey Dunn. There is Tyrell Alexander, the speedster who has been on campus going on three years, as well as Braydon Johnson and Landon Wolf who have both turned heads.

But the odds-on favorite has to be Tylan Wallace, the four-star recruit who Mike Gundy just couldn’t keep off the field last year. In limited action, Tylan showed himself to be a complete receiver at a young age as well as a big play threat.

We still don’t know exactly what this offense will look like. The presumed 1-2 race for QB will not report to campus until this summer, and we should expect a heavy does of Justice Hill-JD King-Chuba (Gone…). But we’re still going to see a a vertical attack from Mike Yurcich’s group and he’s got plenty of talent to spread the ball to.

• Joining his brother Tylan, Tracin Wallace has made the switch to the WR room and could be a sleeper for reps. The former record-setting high school QB was hampered by multiple knee injuries and spent last season redshirting and soaking up knowledge in the QB room.

• Malik Givens is a new addition to the spring roster but not to Oklahoma State. The junior receiver has been a member of OSU’s men’s track team since the 2015-16 season. He’s earned All-Big 12 honors in the men’s indoor 60 meters each of the last two years and earned all-conference honors in the outdoor 4 x 100-meter relay in 2016. He did play football at Booker T. Washington High School (Tulsa, Okla.).