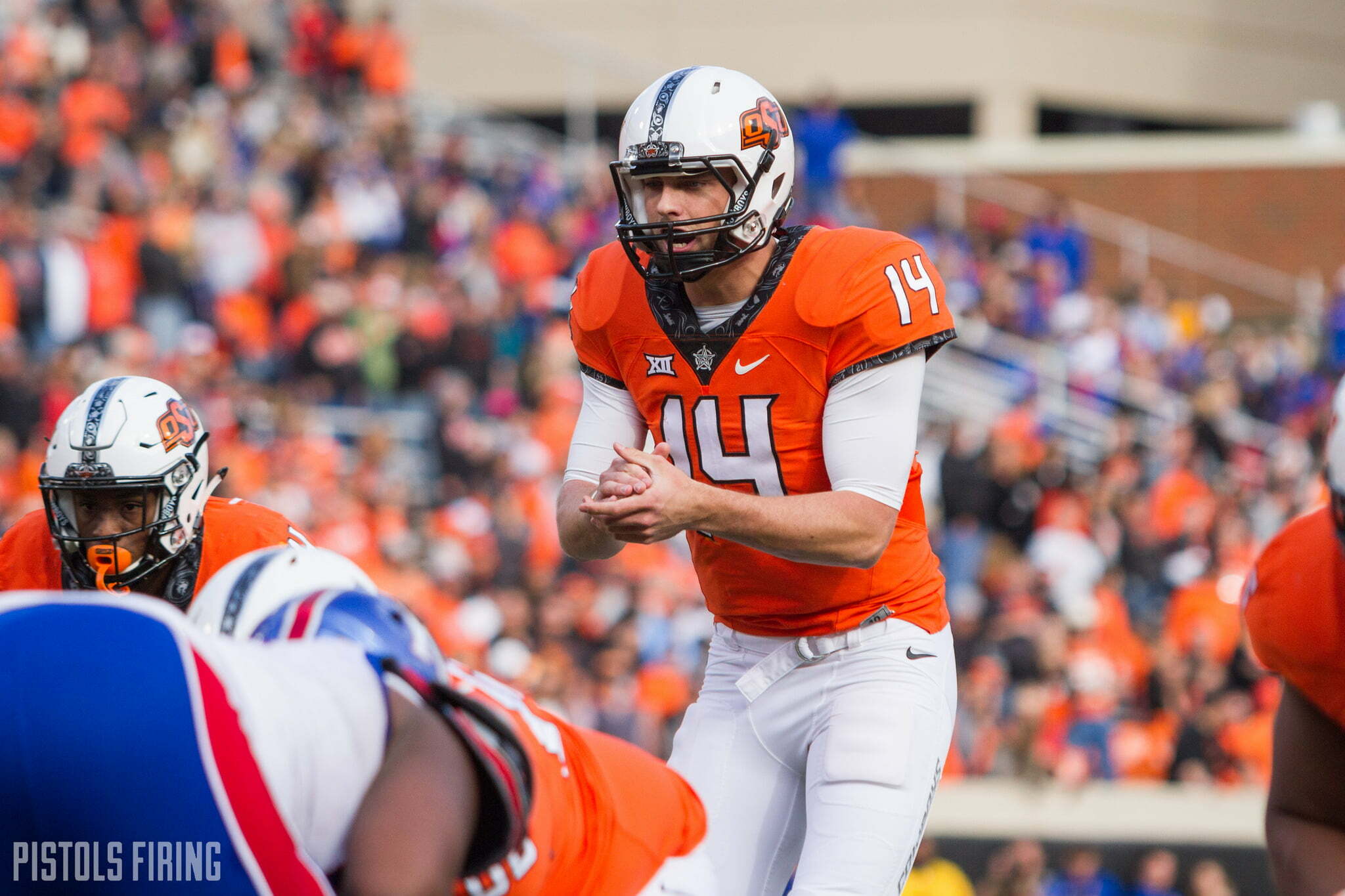 Oklahoma State’s spring football practices start later this month (crazy, I know), and it’s time to start taking a look at what to expect from various positions. First up, the least-difficult position to predict over the last few years has now turned into one of the most difficult.

Not yet on campus

What We Could Learn

Oklahoma State might be the only team in the country whose top two quarterbacks on the 2018 depth chart won’t even be on campus for spring ball. Nothing will be decided during March or April (not that it ever really is with Gundy, anyway). That’s sort of a letdown when it comes to #narratives, but when the Chosen One is prepping for prom and finishing up U.S. History, any conclusions we reach will have to be deferred to August.

I’m also not sure there’s much to be sorted out with the current QBs on the roster. The clear-cut hierarchy is Cornelius –> Wudtee –> Whoever. What matters with the QBs is where exactly Sanders and Brown slot in here. I’d believe anything at this point, and maybe the most boring positional race in spring ball is going to become the most exciting one in the fall.

“I like the development of Corn Dog, and I like where Wudtee’s at so in the spring we need to really get into how good are they and what can they do for our team,” said Gundy in December. “But … we are not scared to play a freshman. If we have a young man who comes in and has a gift. He’s willing to lead. He’s tough enough. It’s our responsibility … to put the playbook together to where the young man understands it to where he can have success.”

Honestly, all of this is probably for the best. With Sanders staying away until later in the year, Gundy won’t be able to play coy with the media about who the starter is going to be. We’ll get several weeks of parsing Gundy quotes like linguistics doctorates instead of a few months. Healthier for all involved.

The real storyline for me is Gundy doesn’t really seem to care that Sanders isn’t showing up until the summer.

“Everything will get started eventually,” said Gundy in December when Sanders signed. “It will move really fast, but he’ll be fine.”

“He’s a great prospect,” added Gundy. “He’s very humble. For all the awards he’s received, he never says a word.” Gundy mentioned his lack of talking twice. “We spent an hour and a half fishing on three different ponds (at my ranch on his official visit) and he never said a word to me.”

If he wears a Carhartt jacket to his first class, that’s the Gundy trifecta.

Keep an Eye On

We know what we’re getting from Cornelius. We know he’s a tall, solid QB who can run a little and throw a little but isn’t going to light the planet on fire en route to 11 wins. He’s essentially a taller and probably worse Clint Chelf (/whispers when you’re rolling with those Chelf comps, don’t forget he had the best defense in school history in 2013).

So I’m more focused on Wudtee. He’s now had two years to learn everything and for the game to slow down for him. I wasn’t very impressed in his limited time against South Alabama, and he hasn’t exactly wowed during spring games in the past few years. But there’s at least a path for him to turn a three (two and a half?) horse QB race into an all-out derby. Will that happen? I don’t really think so, but he’s the one I’m watching this spring.

Gundy is going to have more “ors” than a rowboat on his first fall depth chart, but my chips are in the middle of the table with Sanders (aside: betting on somebody named “Sanders” in an Oklahoma State football uniform feels good). It’s weird to think Brown is transferring ostensibly to be the starter in Stillwater but could realistically (and quite easily) not even end up as the backup.