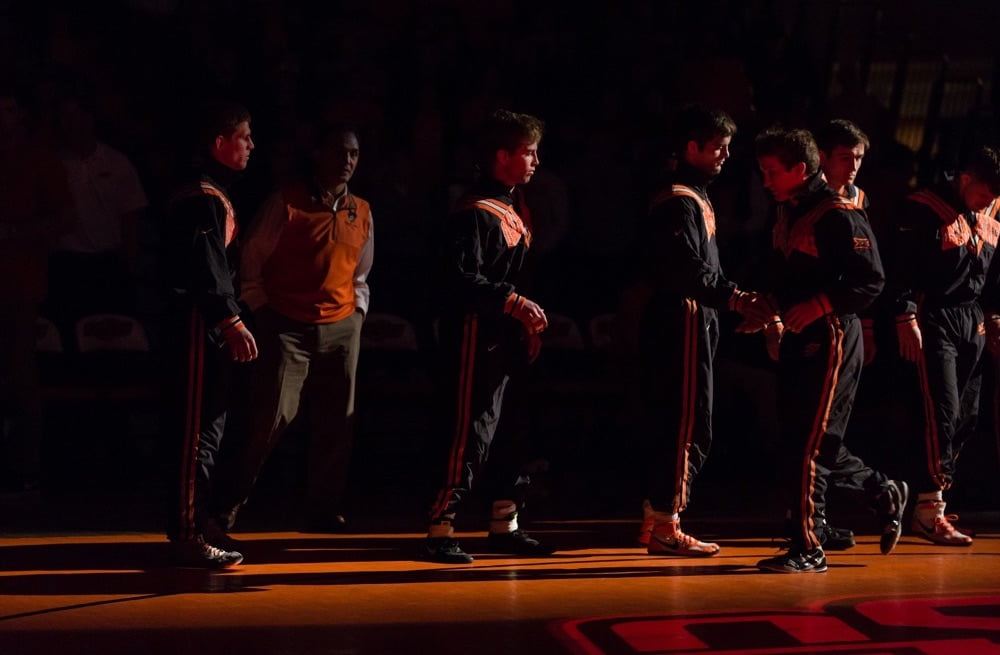 Mike Gundy put on a singlet and told you to come watch the No. 1 Oklahoma State Cowboys take on the No. 2 Penn State Nittany Lions on Sunday afternoon. If that glorious mullet, gold chain, and “BIG DADDY” mug did not hype you up enough to scrap together the $10 for the general admission ticket, you need to get your pulse checked … and also read this preview of what is certainly going to be one of the best wrestling duals Gallagher-Iba has played host to in several years.

Much has been said on the internet about these two teams. Oklahoma State features the deepest lineup in the nation with all ten wrestlers being ranked in the top 11. Penn State has one of the most dominant wrestlers at 149 pounds in Zain Retherford, two other wrestlers that can rack up bonus points and wow a crowd with their ability to move and score points, and two freshman phenoms that have 9 high school state titles and two junior world championships under their belts.

The comments sections on Facebook are filled with Penn State fans (most of whom would shock this writer if they actually attended Penn State) claiming that this will be another run of the mill domination for their team.

Here is why they are wrong:

The two have a handful of common opponents, but that does not really tell the whole story. Lately, Piccininni has come on very strong to earn technical falls in the majority of his last ten matches. He is lightning quick from his feet, but gets into trouble when he is too aggressive and allows other wrestlers to capitalize on his mistakes.

Suriano is more patient and has a Dean Heil-like ability to fight off attacks from his opponents. Expect this match to be a tense one, and for Suriano to come out on top with the decision. 0-3 Penn State.

Penn State had no depth at this position, so when starter Jared Cortez went down it left a large dent in Penn State’s national championship hopes. Carpenter is not a good wrestler, winning only one match all season, and with Brock’s ability to score points quickly the Cowboy faithful should be expecting a tech fall before the end of the second period. Would be big for the Pokes if Brock can put Carpenter on his back early. 4-3 Oklahoma State.

Jimmy Gulibon is a very good wrestler. He has consistently been good throughout his four years at Penn State, and was a junior wrestling All Star. That said, the rivalry between Heil and Gulibon has been lopsided. Starting at the Ironman junior tournament in 2011 when the 16 year old from Ohio shocked top seeded senior Gulibon.

Heil hasn’t looked back since and has won every matchup between the two. Expect the same on Sunday in classic Dean Heil fashion. Great scrambling and defense, not much scoring. 7-3 Oklahoma State.

Anthony Collica has always wrestled Zain Retherford closer than just about anybody that the Nittany Lion junior has faced in his career. Retherford has been dominant this season. 13 pins, two tech falls, and a major decision in just 18 matches. The two opponents that have made Retherford look human in the past two seasons are Brandon Sorenson of Iowa, who Collica defeated in overtime, and Collica himself.

There is upset potential here. The Cowboy senior has been on an absolute tear this season and would love nothing more than to end his time on the mat in Gallagher-Iba Arena with the big upset… but until that happens we have to pencil in another win for Retherford. 7-6 Oklahoma State.

Like so many of the matches before, these two wrestlers are not strangers. Joe has not been able to defeat Nolf, including in the consolation rounds of the NCAA tournament last season. That match ended with a major decision victory for Nolf, and the only reason it was a major decision is because Joe got caught trying to move Nolf to his back, overextended, and ended up on his back to give up those dreaded near fall points to his opponent.

Joe is a stronger wrestler this year than last year, and with the recent revelation that he had been battling a knee injury it is refreshing that Joe has been able to win as many matches as he had this season. Nolf is great, and has the ability to do things on the mat that look near impossible. The two wrestlers will be cautious with each other, so don’t expect too many fireworks in this round and for Nolf to pick up the decision. 7-9 Penn State.

Chandler Rogers and Vincenzo Joseph are two extremely talented wrestlers. Both are also the most frustrating wrestlers to their coaches and the most exciting to their fans. The reason that they are frustrating is because you never know which version of the wrestler you are going to get.

This match could go either way, and while Joseph has wrestled well in hostile crowds, he wrestled the backups at Ohio State and Iowa. GIA will be a different beast on Sunday and Chandler Rogers will be the best wrestler he has faced since his lost to Illinois’ top-ranked Isaiah Martinez. Rogers wins the decision. 10-9 Oklahoma State.

Mark Hall defeated Kyle Crutchmer in a lopsided 10-3 decision at the Southern Scuffle in January. Since then, Hall was put into the starting lineup at Penn State and the Nittany Lions moved comfortably into the No. 2 slot in all major rankings. Hall is a great wrestler, winning 6 state high school titles in Minnesota and a junior world championship. Crutchmer is inconsistent.

Some nights he is unbeatable and has the strength to take on a heavyweight. Some nights he loses to unranked wrestlers like he did at Mizzou. In his last appearance under the lights at GIA, Crutchmer will pick up the victory.

“It means a lot,” said Crutchmer. “Anytime you compete for anything that has the word ‘national’ in front of it is nice. We’re trying to win everything we can win. We’ve had an undefeated season so far, and we’re not looking to let that slip this weekend.”

Bo Nickal is from Allen, Texas. I still do not understand how Penn State was able to win this recruiting battle, but they did and it has absolutely paid off as Nickal is an incredibly dynamic wrestler. The 2016 NCAA third place finisher at 174 (defeating Chandler Rogers on the way) has pinned 12 of his 17 opponents this season, and is on a collision course with top ranked Gabe Dean at the NCAA championships.

Nolan Boyd has played spoiler before, and the Cowboy great has not had his signature upset this season. It could happen, but like the Collica-Retherford match we will have to see it to believe it. 13-12 Oklahoma State.

Matt McCutcheon has never defeated Nolan Boyd. The Penn State senior is up to 197, and is giving up a lot of size and strength to Preston Weigel. Weigel is well known as one of the strongest wrestlers competing right now, and while he has the surprise loss to SDSU’s Nate Rotert on his record this season, his only two other losses are to J’Den Cox, Rio bronze medalist, and Brett Pfarr, real comfortable jeans.

Weigel should have no problem getting pack points on McCutcheon if he can get on top and keep the Penn State wrestler from escaping. 15-12 Oklahoma State.

The era of the athletic heavyweight is upon us. Guys that use their weight to push smaller guys around like Sam Stoll of Iowa are out, and guys like Nevills, Schafer, and Ohio State’s Kyle Snyder are in. Oklahoma State is fortunate to have a guy like Schafer, who has been awesome in his senior year. The Cowboy’s strength against wrestlers that weigh 40 pounds more than him has been outstanding, and has been able to get guys to their backs in recent matches.

Schafer has rested the last couple of weekends, and I believe that the rest will prove the difference in the match. Nevills has had an incredible season, with his only losses to No. 1 Kyle Snyder and No. 2 Conner Medbery, but his work load has been heavy coming into this dual. Expect a close match, and with the Nittany Lions needing a major decision to tie the dual, Nevills’ push will lead to a mistake giving Schafer the win. 18-12 Oklahoma State.

Students get in free. Tickets are only $10. The Cowboys need you there. Make GIA the Rowdiest Arena in the Country and be a part of history. This is going to be a great one.