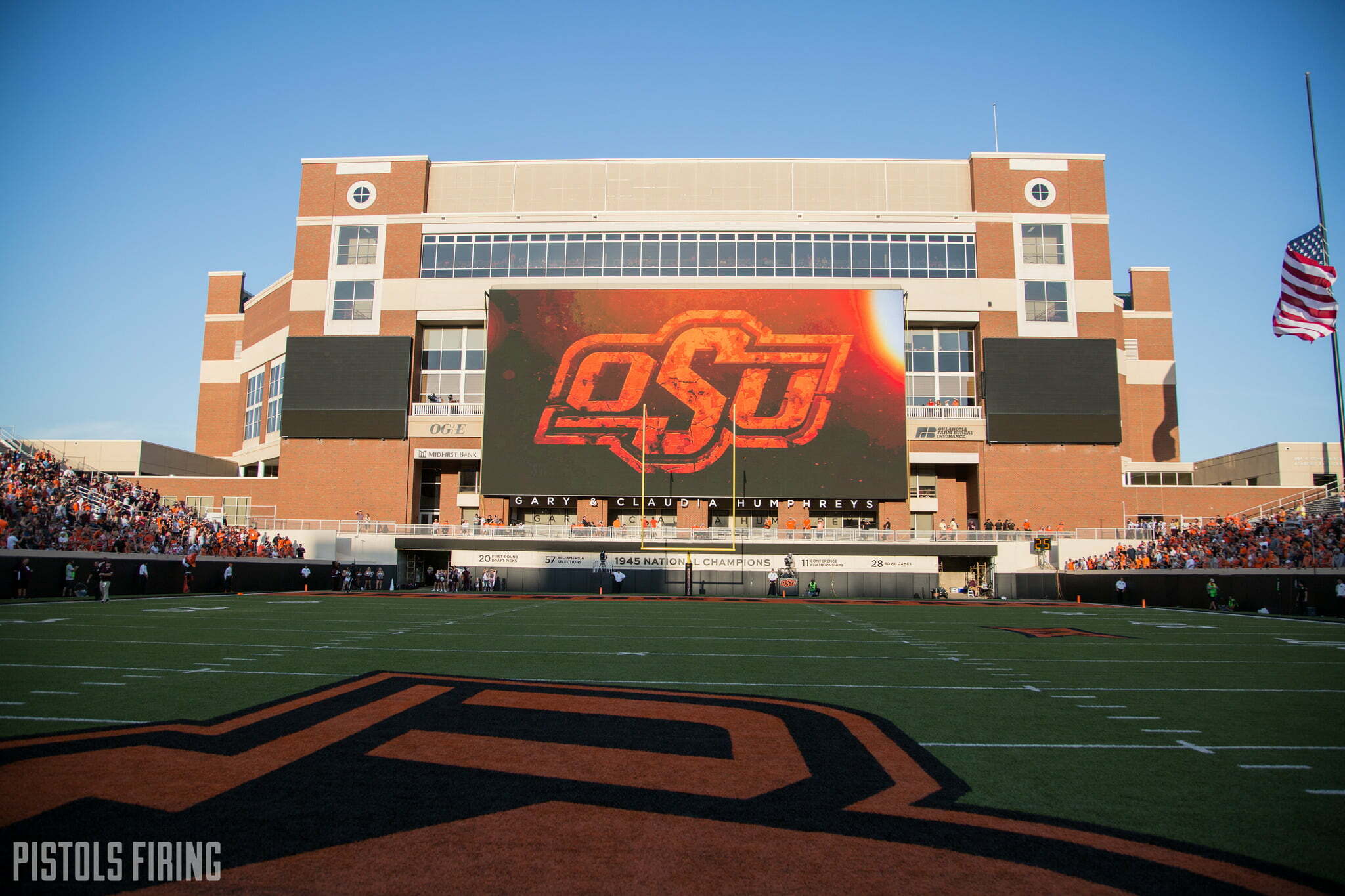 STILLWATER — Pistol Pete fired up his jumbo remote, aimed it at the east end zone and pounced on his crimson-colored power button. At the speed of frequency, Boone Pickens Stadium was beaming with as much as excitement as it was with light as OSU’s new 110-foot video board lit up the field, the crowd and the greater part of the Stillwater sky.

As surprises go, the new addition — revealed for the first time to the masses in OSU’s season-opener on Thursday — was an expected one. Test videos of it being put to use before Thursday had made their rounds across social media, taking people aback both with size and clarity. But seeing it on Twitter and seeing it up close and personal are two very different things. It drew rave reviews from fans who experienced it firsthand.

“Gundy and Holder are turning BPS into a living room,” said Shannon Mallory of the stadium upgrades. “Beer is now served, your favorite food is just downstairs, and they put up a big new flatscreen tv.”

“The stadium had a completely new feel,” said Bryan Murphy, who also came away impressed by the video board in OSU’s 58-17 win. “Like going from Texas Stadium to AT&T Stadium. It wasn’t so dominating to me that I watched it instead of the action on the field, but it had a huge presence. The clarity and the fact there was zero lag time are what surprised me.” 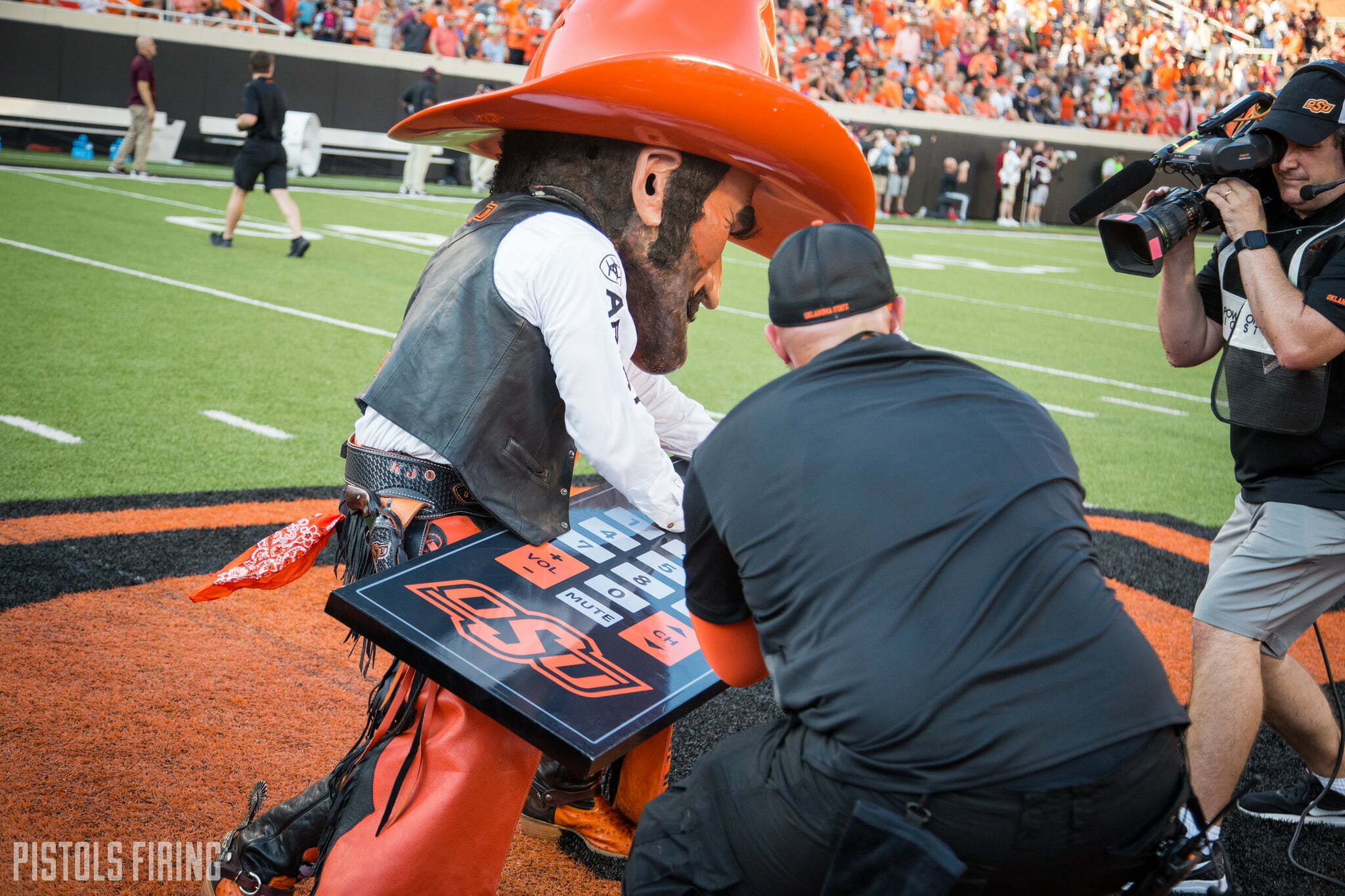 Among the graphics and videos shown Thursday were long-standing recurring content, such as the famous ‘Hell’s coming with me‘ video. Kurt Russell’s reliably consistent appearance made his debut on the new video screen, and it was equal parts tremendous and raucous as the new audio upgrade that came with the size and quality boosts shook the stadium with its deep bass and crystal clear quality. It elicited “oohs” and “aahs” from the crowd.

As for its placement directly behind the east end zone field goal, early returns on how it will be used is promising, to say the least. Will it black out the screen on opposing kickers efforting to kick into the nets hung by GIA? The answer through one game is a definitive “no.” Instead, against Missouri State, OSU called on Pistol Pete when it needed a distraction. As Missouri State attempted a field goal in the opener, Pete’s face appeared on the screen and slowly enlarged, as if he were staring down the kicker and peeking into his soul.

Replays on the new screen, which was adorned with the names Gary and Claudia Humphreys after their donation to make the board possible, were also tremendously well-done. After a highlight play, you could crane your neck to the east end zone and immediately see a jumbo replay of what just happened.

When Chuba Hubbard had a catch and was hit high by an opponent in the game that led to a review of targeting, for instance, replay of the play was shown repeatedly as officials reviewed whether it was targeting or not. Refs even snuck a quick glance at it instead of the handheld review device they were using!

Rather than doing away with the previous setup of two video boards attached to GIA (which now look like iPads pinned to the building in comparison to the new board), OSU smartly repurposed them. Down and distance and general stats were used for those, instead, leaving the big boy to do his job.

“I liked how they would occasionally use the smaller boards as stat boards and let the big screen show video and replays,” said Colin Johnston. “I love that they can show in-game stats on the small boards now, because I’d always use the app before to do so,” said another fan on Twitter.

As far as celebrity appearances are concerned, none was bigger than Gerard Butler on Thursday. Replacing the old anthem on third down, Butler, appearing as Leonidas from 300, led the charge of roars as he called the defense to focus and simultaneously called for fans to make noise. He too, like Kurt Russell, had a booming presence that resonated throughout the stadium.

All of the ways OSU used its new toy in the opener indicate that it may be the biggest stadium upgrade of the decade for Oklahoma State. From an enhanced in-game experience — like the new “Simba cam”, where fans are encouraged to lift their children (and one man lifted his beer high and proud) — to the upgraded quality in video and audio in replays and more, it’s quite clear detractors for the new entertainment boost will be few and far between.

Even more clear than the new video quality: Oklahoma State has come a long ways under Mike Gundy, and we’re in the midst of the peak of OSU football. A lot of that of course is courtesy of Boone Pickens, who made his own appearance on the board after being unable to attend the game. 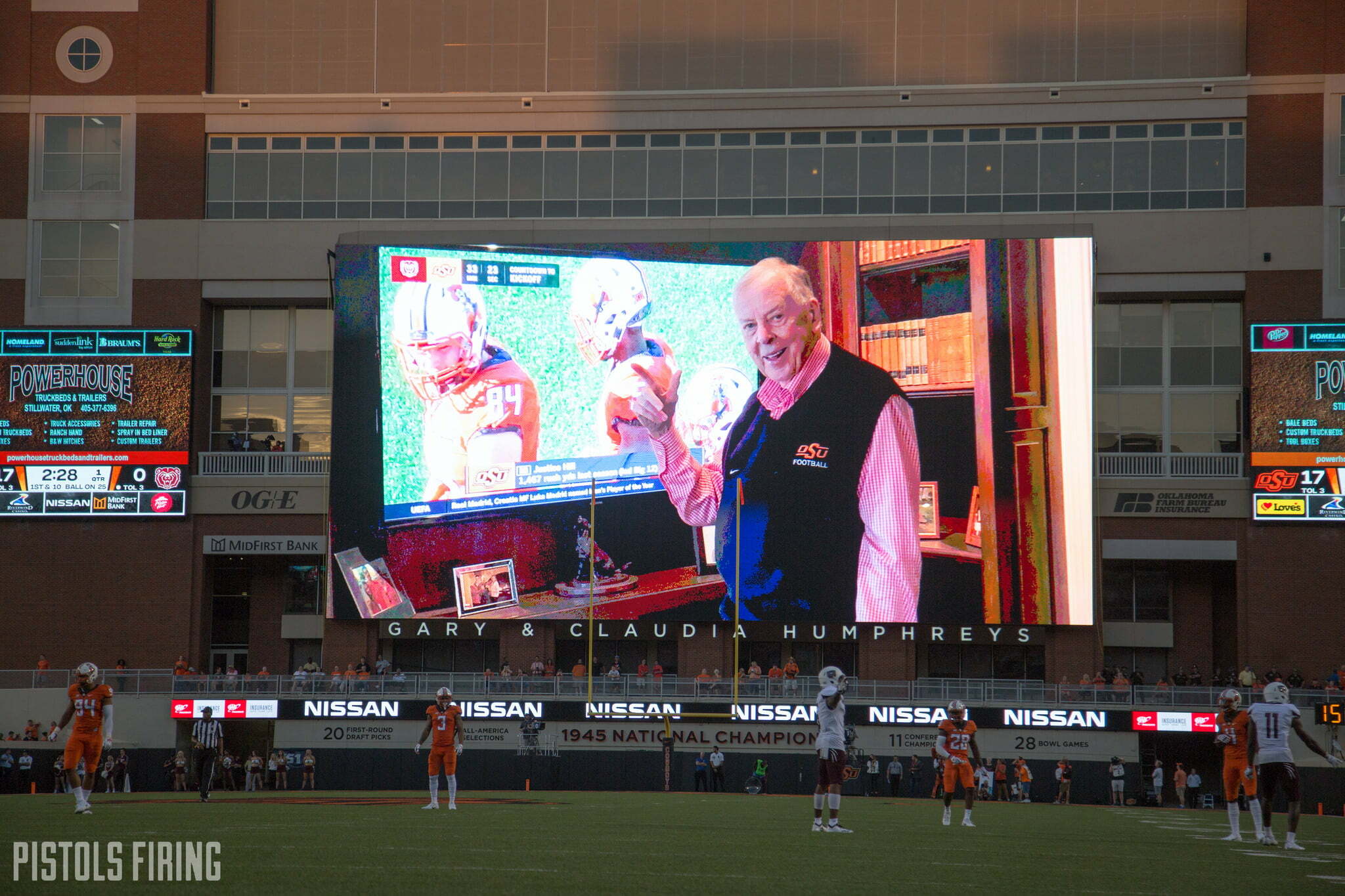 Said Mike Gundy on Monday: “I thought it was fantastic. I called Mr. Pickens on Friday morning, was sitting outside drinking coffee, I called him and didn’t get him so I left a voicemail. He called me back, and we visited 10, 15 minutes Sunday, and that that was the one reason I called him to tell him that I wish he could have been here to see the stadium, the proximity of it, the crowd, the sound, and now the video board.

“It’s just really the final touch,” Gundy emphasized. “It’s a heck of a place to play a game. The journey we’ve had for 15 years to get to this point has been pretty amazing.”